Optical rather than electronic communications are attractive solutions for designers of industrial networks and relatively low rate, short-range data networks such as in the automotive sector.


Optical rather than electronic communications are attractive solutions for designers of industrial networks and relatively low rate, short-range data networks such as in the automotive sector. LEDs are commonly preferred as transmission sources in such systems due to their low power requirements, specific wavelengths, small footprints, and long lifetimes.

Such critical networks must withstand the high levels of electromagnetic interference commonly found in industrial environments and vehicles. They also need to resist high temperatures, and environmental threats like dust and liquids and avoid the generation of electrical 'noise' that could either cause interference or explosions under certain conditions. These requirements make LEDs good choices for highly reliable communications.

In addition to their use in readouts and display backlights, LEDs are increasingly used for data transmission in industrial/automotive communications systems. The distribution medium is often Polymer Optical Fiber (POF) which, in contrast to copper, has the advantages of flexibility, electrical insulation, and high resistance to harsh environmental factors such as dust, water, high or low temperatures, and vibration. 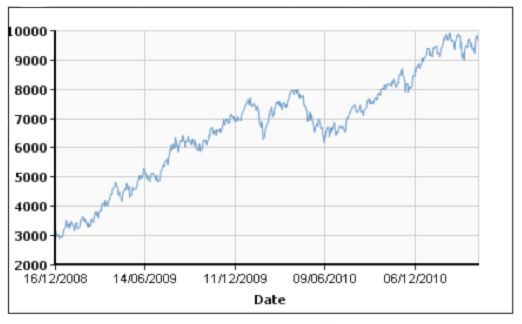 
Another increasingly important factor in the growth in demand for POF-based communications and the associated LED-based transmission technologies is the dramatic rise in the price of copper in recent years due to phenomenal demand for that metal in booming manufacturing economies in the developing world, especially China¹.

Advantages of LED and POF systems While LEDs have not caught on as transmission sources in the high-rate, long distance telecommunications business, they operate at up to 155 MBit/s in data communications over shorter distances. Some systems use LEDs with output wavelengths of 650 nm or 850 nm to drive 155 Mbit/s communications. Above that rate, data communications are generally driven by lasers or by vertical cavity surface emitting lasers (VCSELs).

For POF-based communications, LEDs are still the predominant light source. Poly methyl methacrylate (PMMA) fiber has a 1 mm diameter core, which supports good transmission at 650 nm and a couple of windows around the green and blue wavelengths. The car industry, which is currently the biggest volume user of POF, is increasingly using LEDs and there is also a common low-speed industrial application area for measurement and control. 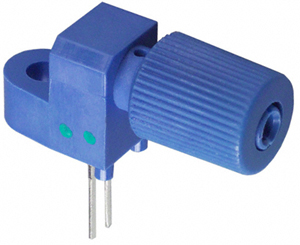 Industrial Fiberoptics’ IF-E98³ is a high-speed, red LED housed in a connector-less style plastic fiber optic package. The output spectrum of the IF-E98 is produced by an Aluminum-Gallium-Arsenide (AlGaAs) die that peaks at a wavelength of 650 nm, which is one of the optimal transmission windows of PMMA plastic optical fiber. The device package features an internal micro-lens and a precision-molded PBT housing to ensure efficient optical coupling with standard 1000 μm core plastic fiber cable.

The short transition times of the IF-E98 make it suitable for medium-speed analog and digital data links. Link distances in excess of 75 m at data rates of 50 Mbit/s are possible using standard 1000 μm core plastic fiber when matched to IFO’s IF-D97 photologic detector. The drive circuit is simpler than required for laser diodes, making the IF-E98 a good, low-cost alternative in a variety of analog and digital communications applications.

Lumex Industrial Communications4 also supports the full range of communications applications. Because the use of optoelectronics is expanding rapidly in the communications market, industrial customers with communications needs often seek a single supplier partner – such as Lumex – to ease the burden of sourcing multiple vendors.

“Whether we are supporting standard SMT and through-hole LEDs or working on a fully integrated solution, our engineering design team is focused on ensuring that the end product being designed will fit the customer’s needs for the application, versus bending a product design to meet the components available,” as stated on the Lumex website. “We are always engaged with our customers to fine tune our offering and designs to meet their needs. We believe that design collaboration has consistently offered the best results for meeting the demands in the industrial controls environment and the increasing complexity of communications equipment designs.”

By partnering with a wide range of industrial control companies over many decades, Lumex has become a leading player in bringing new optoelectronic and display technology specifically designed for this market. A notable partner of Lumex is ROHM Semiconductor5, which offers a range of optical sensors and communication devices, from IR LEDs and phototransistors to fully integrated remote control receiver modules, IrDA transmitters, photo interrupters, and customized proximity sensor detectors.

Industrial networks have long been the mainstay of POF communications, commonly using LED sources, alongside Plastic Optical Fiber networks. A wide array of applications use POF, including machine control, sensing, networking and isolation, using both proprietary and standards-based protocols such as SERCOS, PROFIBUS or INTERBUS. These generally operate at speeds of up to 30 Mbit/s.

The most significant development in this market has been the recent decision by the association of German car manufacturers (AIDA) to move towards the utilization of the latest industrial Ethernet networking standard called PROFINET over Plastic Optical Fiber in their production plants. Such is the size of this industry that it has the potential to influence the adoption of this technology combination across a much wider range of industries, thus creating a long-term roadmap for optical-Ethernet-based networking standards across the entire industrial spectrum.

The market needs for POF are distinct and growing in terms of its usefulness and breadth of application. The need for solutions that bridge the gap between the cost benefits of copper and the performance benefits of fiber is clearly filled by POF. As each of the above mentioned ranges of products, applications, and associated markets continue to evolve, it is clear there is an appreciable need for higher speed industrial/data communications systems such as these based on POF and lit by LEDs, microlasers, vertical cavity surface emitting lasers, and other solid state sources.