This article discusses how to electrically protect LEDs which are at higher risk than traditional lamps of damage from ESD and electrical transients caused by power supply problems and lightning strikes.


The advent of high-brightness (HB) LEDs has opened up a new raft of applications for solid-state lighting. In addition to more familiar uses, such as domestic lighting, billboards and display lighting for retail premises, LEDs are now commonly deployed in applications from vehicle lights to streetlamps, traffic lights, and airport runway markers.

Each of these applications makes use of one or more of the many positive features of LEDs. For instance, when compared with incandescent lamps, LEDs are resistant to vibration and shock; they can cut operating costs by decreasing electricity consumption and reducing the frequency of replacement and renewal – lifetimes of 35,000 to 50,000 hours are commonly quoted; they are reliable; and in terms of electrical characteristics, they respond quickly.

However, in order to gain these considerable advantages, designers do need to be aware of some of the potential pitfalls of designing with LEDs. For example, they are at higher risk than traditional lamps of damage from ESD and electrical transients caused by power supply problems and lightning strikes. Such events are more common in outdoor applications. Moreover, the technologies most often used to produce HB components – such as those that employ sapphire or SiC substrates – are the most susceptible to such damage.

LEDs are also prone to the effects of temperature cycling and vibration, both of which can damage their internal wire bonds, leading to degradation and eventual ‘open failure’. Over-current and over-temperature conditions can lead to thermal runaway-type phenomena. Nevertheless, even a fault that starts with an internal short, and the consequent heating, will most likely culminate, after failure of the internal wirebond connection, with an open circuit.

At first sight, these somewhat unusual potential failure modes might seem little more than interesting oddities. However, there are some important consequences, particularly when designers choose – as they commonly do – to power a string of LEDs via a single constant-current power supply.

There are good reasons behind this design strategy. First, simple economics dictates that a single power supply will be more cost effective. However, just as importantly, LED brightness is largely a function of current. This means that a series string is the easiest way of ensuring uniform brightness between LEDs within a group, and of exerting common brightness control over the group.

The problem is that when an LED goes open circuit, current stops flowing throughout the system and all of the LEDs in the string go dark. While merely unsightly in a billboard, this problem can pose a safety hazard in a vehicle signal or headlight. The problem compounds, in the case of a traffic light or streetlight, with the fact that access for replacement may not be straightforward.

As a solution to this problem, circuit protection component manufacturers offer a range of solutions. According to TE Connectivity, a sometimes-neglected fact is that LEDs conduct more heat and radiate less in comparison with incandescent or compact fluorescent (CFL) technologies. Because LED malfunctions often therefore lead to the generation of excessive heat, there is a risk of serious thermal conditions and even fire.

To avoid these problems, the company recommends the use of one of its Polyswitch RUEF series positive temperature coefficient (PTC) devices, otherwise known as resettable fuses, connected in series with the at-risk LED. 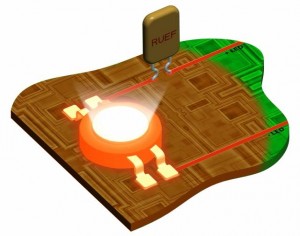 Figure 1: A Polyswitch positive temperature coefficient (PTC) device can be used in series with an LED to prevent thermal problems.

The Polyswitch device is placed in close proximity to the LED, so that in addition to protecting against electrically induced overcurrent conditions, it will also trip in the event of overheating due to environmental or circuit conditions. As with all of the company’s Polyswitch series, the advantages of using such devices include their resettable nature, fast time-to-trip, low resistance (and hence low power dissipation) in normal operation, and small size.

Manufacturers, such as Littelfuse, Bourns, ON Semiconductor, and STMicroelectronics, all offer components tailored specifically for protecting HB LEDs. These connect in parallel with one or more LEDs, and can perform a number of useful functions. Firstly, in-circuit, if an LED fails open, the protection component switches on and conducts the supply current, effectively bypassing the faulty LED and allowing other LEDs powered by the same supply to stay illuminated.

As part of a sub-assembly, these components can also provide protection against lightning and ESD events. These two transient phenomena have rather different characteristics: lightning surges have rise times measured in microseconds, while ESD events are measured in nanoseconds. The designer needs to assess the risks to the LED in-circuit, and implement whatever degree of protection is appropriate.

Finally, some LED protectors can be used to prevent damage to LEDs should the power supply be inadvertently connected in reverse. Without protection, this will typically result in the full supply voltage appearing across the LEDs, which enter breakdown conduction with consequent potential damage. LED protectors can be selected either with a bidirectional characteristic, or with a breakdown voltage below their designated forward bias voltage. Either approach will cause the reverse current to be shunted through the protection component, once again preventing damage to the LEDs.

In terms of specification and selection, these devices are relatively simple to design with. In normal operation, they draw very little current, minimizing their impact on steady-state system power consumption. However, when the voltage applied to a device reaches a certain threshold – the breakover voltage – the protector moves into a low-resistance conduction mode. It stays in this state for as long as the current passing remains above a level defined as the ‘hold-up’ current. If at any point the current falls below that level (for instance if the LED it is protecting is replaced or self-heals), the device will shut down and return to normal operation.

Choice of breakover voltage is essential to avoiding false tripping. The designer should choose a component whose breakover voltage is comfortably in excess of the specified forward voltage of the LED it is protecting. If the device is to be connected across several LEDs for lower-cost protection, the breakover voltage must clearly be greater than the sum of the normal operating voltages of all the LEDs. In addition, it is worth being aware that different colors of LED tend to have different forward voltage ratings: these typically range from about 2.7 V for red devices to approximately 4.1 V for blue.

Of course, specifying breakover voltage is not merely a case of “the higher, the better”. The designer must be sure that the device will in fact trip when a fault occurs. Here, the most important parameter is the open-circuit (or compliance) voltage of the power supply. If current stops flowing, this is the maximum voltage that will appear across the protector, and it must be sufficient to trigger conduction.

The component must be able to withstand the maximum current sourcing capability of the power supply. For lightning and ESD protection, it needs to conform to the various relevant IEC standards (for instance the human body model, or HBM specification for ESD). Additionally, if reverse-bias protection is required, the reverse breakdown voltage of the protector must be smaller than the corresponding value for the LED.

The Littelfuse PLED range is typical of such devices. PLED protectors are available with breakdown voltages of 6, 9, 13 and 18 V, giving the designer the option of protecting up to four LEDs with a single PLED device, depending on cost constraints and reliability considerations. The PLED5 Series offers inherent reverse-bias protection: it has a reverse-bias turn-on voltage of 1.1 to 1.6 V, substantially less than the reverse breakdown voltage of a typical high-power LED. When power is applied in reverse to an LED string with PLED5 devices, all the protectors therefore go into conduction, diverting harmful currents. 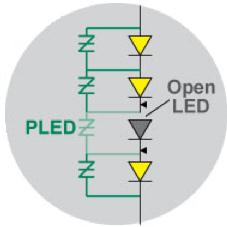 Figure 2: Each Littelfuse PLED device can be used to protect one or several LEDs.

Compatible with one-, two- and three-Watt LEDs, the PLED series also provides ESD protection at ±15 kV air discharge, ±8 kV contact discharge and EFTs (electrically fast transients) of ±40 A, 5/50 ns. Active current is of the order of microamps.

Bourns’ LSPxxxxAJR series are LED shunt protectors supplied in surface mount DO-214AC (SMA) packaging. The company says that the devices are particularly suitable for LCD backlighting, transport lighting, avionics, intrinsically safe, and low maintenance lighting, where in addition to the advantage of small size, they provide fast switching, automatic reset, and protection against surges and transients. 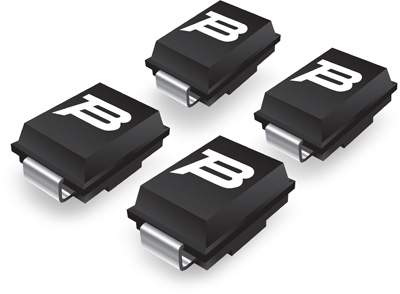 Available in 6, 9, 13 and 18 V versions, the devices can be used to protect single and multiple LEDs in a string. Bourns believes they provide a viable alternative to the use of Zener diodes, which are impractical in high-power circuits for reasons of cost. In line with low-energy requirements, when an LED fails, the LSPxxxAJR device in conduction mode dissipates less power than the LED it protects.

The NUD4700 from ON Semiconductor is recommended for use in high reliability applications such as headlights, lighthouses, bridges, aircraft and runways, as well as in situations in which LEDs are prone to transients and surge conditions. The device is designed for use with 1 W LEDs (nominally 350 mA at 3 V).

The company cites among the advantages of the NUD4700 its simplicity and the ability to reset itself should the failed LED self-heal or need replacement. On-state voltage is typically 1 V, with off-state current less than 250 mA. 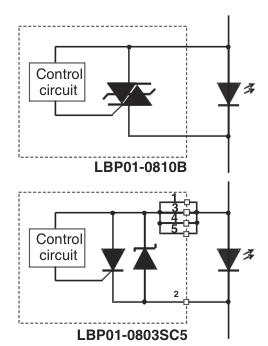 Figure 4: STMicroelectronics’ LBP01 is available in unidirectional and bidirectional versions.

Compatible with LEDs drawing up to 1 A of current, both versions of the device provide surge protection to the IEC 6100-4-2 and IEC 6100-4-5 standards, being rated for a peak pulse voltage for contact discharge of 30 kV, and repetitive peak pulse current (8/20 µs) of 24 A. They are available in either SMB or SOT23-5L packages. Operating current in normal operation is an extremely low 100 nA, while with a hold-up current of 200 mA, the devices in ‘tripped’ state dissipate less power than the LEDs they protect.

The advent of high-brightness LEDs has opened up a wide range of opportunities for the designer. However, in terms of component and circuit protection, they can present challenges. ESD and other surge-type phenomena have traditionally been dealt with by the inclusion of MOVs or TVS diodes, but these devices cannot defend a string of LEDs against a single failure. LED power supplies and driver ICs themselves routinely include open LED protection – but it is important to understand that this is generally intended to protect the (constant current) power supply against open-circuit conditions. Previous approaches often used Zener diodes to reduce the impact of a single LED failure – but for high-power LEDs, this approach is not cost effective.

The introduction of dedicated LED protectors by a number of circuit protection firms is therefore a valuable step forward. With careful design and component selection, engineers can now make sure that the lights stay on, even in the most demanding applications.