Ambient or mood lighting inside the car has primarily been the realm of high-end luxury vehicles, such as the Audi A8 in Figure 1 above, or the enthusiastic car customizer installing after market systems. 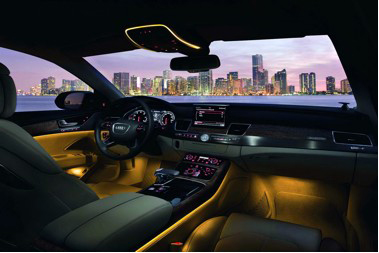 Figure 1: Ambient lighting in the Audi A8: functional and attractive.


Ambient or mood lighting inside the car has primarily been the realm of high-end luxury vehicles, such as the Audi A8 in Figure 1 above, or the enthusiastic car customizer installing after market systems. But the manufacturers’ horizons are broadening.

LEDs in cars are not new, of course. All carmakers are now using LEDs. Single LEDs have been used in instrument clusters and behind dashboards for 20 years or more. Headlamps and rear lights are the most eye-catching of recent innovations, replacing traditional lighting technologies. Increasingly, LEDs are being used in new applications, such as to back-light switches to indicate the location of door handles or window openers. More recently they have found their way into footwells, cup holders (see Figure 2) and map pockets, as well as door and roof panels. More subtle features include low-level colored overhead-directed lighting that gently highlights the gear stick, for example.


The economics and performance benefits of LEDs are convincing the automakers that these devices can provide a significant differentiator in terms of comfort and convenience in the family sedan or compact run-around. Ford, for example, has announced that its 2013 Fusion is the first to sport exclusively LED lighting throughout its interior. The model will be supplied as standard with lighting in the company’s signature ‘ice blue’ color. But, exploiting one of the benefits of LED technology, Ford can offer user-specified tones, including orange, red, green or purple.

Many other carmakers are focusing on interior lighting, not just to be functional, but also to add style and differentiation. Some, including Audi, Toyota and BMW are continuing research into ambient lighting to determine optimum colors and brightness levels, and how to improve the delivery of safety information dependent on the perceived mood of the driver. LEDs are likely to play a major role in future automotive interior lighting schemes.

Automotive OEM Federal-Mogul has developed two LED-based interior lamp designs, expected to be in production during 2012 or 2013. The first is an interior lighting module which, with a 12 mm profile, is considerably thinner than conventional technologies. Reduced headroom allows greater interior design options, the company claims. Other benefits include fewer parts and reduced energy consumption. When combined with its proprietary lens, called NovaLens, the lighting modules provide a consistent and homogeneous illumination with no hotspots. The innovative design of NovaLens locates LEDs at opposite ends of the lamp, and includes flute-like structures on the lens, so that the lens reflects and refracts the light to produce a more uniform illumination.

In addition, Federal-Mogul has developed a high-efficiency LED-based interior lamp unit that can be operated through hand gestures. Designers have considered that the long life and durability of LEDs means that these devices are likely to outlive the car, and that a mechanical switch is now the weakest link. Gesture control is also considered by some to be a safety feature.

The touch-free system operates via a capacitive proximity sensor, which triggers when it detects the conductivity of iron in the blood of a hand, even if gloved! The detection field can be set from 0 to 80 mm. Additional functionality can be incorporated, including control of light intensity and color by sliding or tapping a finger on the sensor.

Contrast these developments with the early days of interior lighting, typified by the bulky white light dome in the center of the roof panel. Backlit instrument clusters and glove box lighting came later. However, reliability and bulb lifetime are often-quoted limitations of pre-LED lighting technologies: most long-term car-owners will have had some experience of a failed bulb somewhere inside the vehicle, especially if it happened to be behind the dashboard or inside an instrument cluster. Bulb replacement may not have been a trivial task.

Getting in the mood

Today, with LEDs taking center stage, the focus is on ambient or mood lighting, and designers are in their element. Concept ideas include wide-area roof illumination and footwell lighting, which can be easily controlled in intensity as required, and in color to match the travelers’ mood. Of course it is not only about mood or fashion, but also about function and comfort. The ability to dim or brighten interior lights becomes an important feature: brightness should be reduced for night driving and increased in the daytime. But it also depends on the particular task in hand, such as map-reading or search mode, which may require brighter light levels.

Color is a critical factor in the designer’s shift to LED lamps for interior lighting. In motor vehicles, red or orange has typically been the ‘warning’ color, and red incandescent bulbs have been widely used in the past. Different colors were achieved through the use of colored lenses, but these also reduced light output, making them less efficient.

Color choice becomes significantly easier with LEDs. By combining red, green and blue LEDs, often also with amber and white, virtually any color light can be generated, in addition to light effects, such as simulating bright daylight or ‘soft’ lighting. Also, plain white no longer exists in terms of LEDs. Cold white LEDs produce a blueish white light, ideal for safety features, while warm white LEDs are used for subdued lighting. The ability to create color and light effects more precisely, combined with the LED’s inherent controllability, which not only makes the color choice user-selectable, but allows dimming too, has led car interior designers to embrace LED technology. This simple expedient of packaging red, green and blue LEDs into a single unit with waveguides has enabled Ford, for example, to give users a wide variety of lighting colors to choose from.

Meanwhile, the carmakers have become experts in presenting drivers with a range of critical and non-critical information without diverting their attention. The lighting of displays and instrument clusters is an important factor in how to present data in an effective and timely manner. The overall effect must also be considered, such as the glare and reflection of colored lights on interior surfaces, especially when driving at night.

The focus on color and mood lighting is not just a marketing ploy designed to appeal to boy racers wanting to attract the girls. Although green has been regarded as the color of relaxation and calm, Ford picked up on research first published in 2008 by the Rensseleaer Polytechnic Institute1, that blue lights can increase alertness by resetting a driver’s body clock.

There is no denying however, that ambient and mood lighting is also about making cars more attractive to buyers, enhancing the appearance of quality and providing a sense of comfort and well-being. It also adds an attractive branding element for manufacturers to visually enhance their car design overall.

A number of manufacturers specialize in LEDs for automotive interior lighting applications, and Hotenda has devices in stock available from many of these. Avago Technologies, for example, recommends two ranges for use in clusters, switches, backlighting of climate control systems and gear indicator displays. The PLCC-4 and PLCC-2 ranges include a wide choice of devices. A typical device in the PLCC-2 range is the HSMC-A101, a red LED in a compact package with a 120° viewing angle. While for backlighting applications that do not require such a wide viewing angle, there is the HSMC-A431 series, also in red.

Figure 3: An example of the XLamp MC-E LEDs available from Cree Inc. for transportation applications.


Several other ranges within Cree’s XLamp series are also suitable for automotive lighting applications. Contained in smaller packages and in a variety of colors, the XP-C and XP-E ranges are available in white, green, blue, royal blue, red-orange and amber. Viewing angles are 110° to 125°, and feature brighter color flux bins than previous devices.

OSRAM Opto Semiconductors is a major supplier to vehicle manufacturers, including Ford, and offers a wide range of devices for the fast growing aftermarket in LEDs for automotive interiors. In the business for nearly 30 years, it is not surprising that OSRAM offers LEDs for virtually every automotive interior lighting application.

Figure 4: An OSRAM Golden Dragon LED in one of various shades of white.


For dome and map lighting units, the Golden Dragon Plus range can be supplied in warm, neutral or cool white tones (see Figure 6 above). A typical cool white device, the LUW W5AM series, provides 292 lumens output and a 170° viewing angle. For more compact applications, the Oslon SX range includes an ultra-white version, in a package measuring just 3 x 3 x 2.43 mm with integrated lens and ESD protection. Devices in the Advanced Power TOPLED range, both colored and white, are also recommended for dome applications. Colors available include red, royal blue, amber, green, yellow, cool white and neutral white. One of the high brightness red Advanced Power TOPLED models, for example, is contained in a 6-PLCC package and has a viewing angle of 120°.

While Golden Dragon and Power TOPLED devices are also used in ambient lighting units, it is the MULTILED range, particularly the six-lead parts containing red, green and blue LEDs that are particularly sought after. A choice of styles is available, such as versions with black surfaces for greater contrast (See Figure 7 below). All multi-chip solutions allow colors to be controlled separately, including white. The manufacturer claims long product lifetimes and power saving due to low forward voltage. The six-lead LRTB GFUG MULTILED, for example, measures just 3 x 3 x 1.8 mm and features a diffused lens over the red, green and blue LEDs.

Despite significant and rapid advances in LED devices themselves, providing high quality, high performance light output, and consistently manufacturable parts that are increasingly cost-effective, LEDs must be carefully designed into an overall system. Controllers, drivers and sensing components may be required. Ambient light sensors, for example, are readily available from a number of companies already heavily involved in LED lighting applications. These include Avago, OSRAM, ROHM, Texas Instruments, and Toshiba.

The LED driver is a critical ancillary component in most LED lighting applications. It is designed to ensure a constant current to the LED even under voltage supply variations. High brightness LEDs are especially vulnerable to supply voltage fluctuations, such that brightness and color can be affected. The use of linear regulators, buck DC-DC converters, boost converters or a buck-boost topology, depends very much on the specific application requirements. More information from leading LED driver vendor, Rohm, can be found in their “LED Drivers for Automotive Applications” article previously posted in the Lighting Solutions TechZone.

Linear regulators may be suitable for all but the most complex interior lighting systems, although high power dissipation can shorten an LED’s lifespan if not addressed. Switching regulators are more commonly used. More information on selecting LED drivers from a range of vendors can be found by reading the Lighting Solutions TechZone article “Driving Automotive LEDs”.

This article has highlighted that after headlamps and rear lamps, interior lighting is the next major focus for LED lighting technology. The white ‘dome’ light in the car roof has been dramatically transformed. Designers are exploiting the color choices and controllability of LEDs, while taking advantage of LED features such as long life, low profile, consistent illumination and no hotspots. A number of devices have been selected from several manufacturers to provide typical illustrations of the applicability of LEDs for automotive interior lighting applications.