An outline some of the many device and topology options available to incorporate features that protect systems for both open and short circuit LED strings.

The increasing use of LED strings in a wide range of indoor, outdoor and automotive solid-state lighting applications is focusing attention on the need to ensure reliability and safety. Protection against damage from transients and over/undervoltage conditions is part of the solution. Another aspect is to design the luminaire, such that if one device fails and opens the circuit, the system can compensate and maintain a satisfactory light output.

While outdoor applications are particularly vulnerable, in the automotive sector circuit protection is a safety-critical issue. The optimum solution will largely depend on the chosen topology, and selection of the most appropriate LED driver, which itself may depend on the nature of the application.

This article will outline some of the many device and topology options available. It will further consider the efforts made by LED driver manufacturers to incorporate features that protect against damaging conditions and ensure continued safe operation with both open- and short-circuit LED strings.

Specific reference will be made to a number of the wide range of drivers available from Texas Instruments, Linear Technology and ON Semiconductor. Specific parts include TI’s LM3431 and LM3466 linear current controllers, Linear’s LT3795/6 DC/DC LED driver and ON Semi’s NCV7680 current controller, aimed at automotive and general-purpose lighting.

Finally, this article will highlight the latest in the PLED range of open LED protection devices from Littelfuse.

A key attraction of solid-state lighting is the flexibility of form-factor facilitated by LEDs, particularly the ability to connect multiple LEDs into strings. LED strings are widely used in a range of lighting application sectors, from domestic consumer through retail, architectural and automotive. Although comparatively rugged compared to some alternative lighting technologies, LEDs are susceptible to ESD, EMI and lightning-induced surges and transients. With LEDs connected in series, the need to protect the entire design is paramount to avoid the unacceptable situation where one open-failing LED turns off all the LEDs in the string.

Typically, designers choose a constant current rather than a constant voltage array because it is more efficient, particularly for LEDs connected in series. Constant current LED strings ensure that brightness is the same along the string, regardless of the input voltage or LED forward voltage.

In such cases, a constant current LED driver can be specified, which is by design only capable of driving voltages within a specific range. Selecting the right LED driver will depend on the topology and requirements of the application. 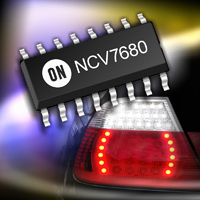 Figure 1: Constant current, boost-based current controllers, such as the NCV7680 from ON Semiconductor, are used for driving and protecting LED strings in automotive rear lighting and other in-car applications.

If, at the specification stage, the designer is not sure what voltage the luminaire will need, a universal input voltage driver may be the solution. Neither so economic nor as efficient, such a solution provides flexibility as it is designed to suit both high input voltage and high input current designs.

For multiple strings, often connected in parallel, a multi-channel driver is required. A true multi-channel driver will regulate each channel (string) independently of the other outputs. This style of design allows each channel to incorporate its own current regulation and/or fault protection. In addition, the ability to group channels allows LED switching to be slightly staggered, thereby minimizing switching transients and EMI.

In many applications, including automotive designs, a boost-based constant current driver is preferable, and protection against short circuits is particularly important. Increasingly, boost topologies are challenging the traditional SEPIC (single-end primary inductor converter) designs, which can be expensive and complex. Some devices can be configured in multiple modes, however, providing additional flexibility. Highly integrated, modern drivers offer sophisticated features such as frequency control and phased dimming, as well as providing superior protection against difficult conditions. A switch-mode boost converter can be combined with linear low dropout (LDO) regulators for precise control of each LED string.

An interesting example is the Texas Instruments LM3431 3-channel linear current controller, combined with a boost-switching controller. This Q1 automotive-qualified device is ideal for driving multi-string LED backlight panels, such as instrument clusters, and other applications where space is critical. The device drives three external NPN transistors or MOSFETS to deliver high-accuracy constant current to three LED strings. Output current is adjustable to drive strings in excess of 200 mA. The device can be configured to drive up to six LED strings.

The boost controller drives an external NFET switch for step-up regulation from input voltages between 5 and 36 V. Additional protection features include LED short and open protection, fault delay/error flag, cycle-by-cycle current limit and thermal shutdown for both the IC and LED array.

For general-purpose multi-string LED lighting applications, TI’s LM3466 also supports a constant current topology. With a wide input voltage range, it can drive multiple twenty LED strings up to a maximum of 70 V per string. The device automatically balances the current of every active LED string, even if the forward voltage of each string is different. If any LED string opens during operation, the LM3466 automatically balances the supply current through all of the remaining active LED strings. As a result, the overall brightness of the lighting system is maintained even if some LED strings are open during operation.

The driver integrates a 70 V 1.5 A N-channel MOSFET with a current limit of 2.06 A. The modular design means that an additional LED string can be added by simply adding a resistor and capacitor. Importantly, the device features undervoltage lockout, fault reporting, thermal latch-off and thermal shutdown protection. Being a purely linear device, EMI is minimized.

Linear Technology is an advocate of boost-based driver architecture, particularly for series-connected LED strings used in automotive designs, typically with a nominal voltage of 13.8 V or lower. The provision of robust short-circuit protection is a key feature of the company’s LT3795 boost DC/DC LED driver. The device can be configured in boost, buck-boost, SEPIC and buck mode architectures.

The device can, in fact, regulate a constant current or constant voltage. It features an input voltage range from 4.5 to 100 V. In operation, the device drives a low side external N-channel MOSFET from an internal regulated 7.7 V supply. Spread spectrum frequency modulation can be activated for improved EMC.

Another part in the series, with the same LED circuit protection features, the LT3796, delivers a 6 to 100 V input voltage range. A separate high-side amplifier is gain configurable with two resistors and can be used to regulate a second current or voltage. See Figure 2 below. 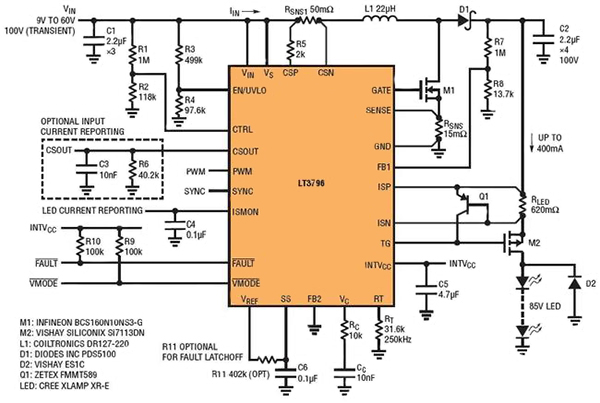 Figure 2:  The LT3796 configured as a boost converter to drive a 34 W LED string from a wide input range. The LED current is de-rated at low input voltages to prevent external power components from overheating. The front-end current sense amplifier monitors the input current by converting the input current to a voltage signal at the CSOUT pin. The resistor network at the FB1 pin provides OpenLED protection, which limits the output voltage and prevents the ISP pin, ISN pin and several external components from exceeding their maximum rating.

Open LED string and short-circuit diagnostic functions ensure that operational reliability is maintained. By connecting the FLTS pins together, multiple devices can be turned off in case of a detected error. A setback power limit reduces the drive current during overvoltage conditions. The device uses external bipolar transistors and feedback resistors to accurately regulate the LED driver current. Up to eight LED strings can be driven concurrently.

The NCV7680, meanwhile, is the company’s existing LED string driver, offering similar capability, and aimed at the same applications. It consists of eight linear programmable constant current sources, driving outputs up to 75 mA per channel. PWM is optional. This device is most useful for low current applications when no external FET is used.

Also automotive-qualified, but a simpler, more economical solution, is the NSI45025 45 V, 25 mA, linear constant current regulator. Based on self-biased transistor technology, it regulates current over a wide voltage range, handling up to 45 V for short durations. It is designed with a negative temperature coefficient to protect LEDs from thermal runaway at extreme voltages and currents.

Contained in a thermally robust package, the constant current regulator turns on immediately and is at 25% of regulation with only 0.5 V. It requires no external components, allowing it to be designed as a high- or low-side regulator. The high anode-cathode voltage rating withstands surges common in automotive, industrial and commercial signage applications. Higher output current and tighter current tolerance versions are also available.

An alternative approach to providing open-circuit protection in LED strings is offered by Littelfuse, with its PLEDxUx Unidirectional Series Open LED Protector. PLED devices are connected in parallel across each LED or every two or three LEDs in a series string. PLEDxUx Series devices are compatible with 1 W LEDs, nominally 350 mA at 3 V.

In operation, the PLED provides an alternate current path when any single LED in a string fails as an open circuit. Rather than provide protection against surges and transient events, it mitigates the ef­fects of single-LED failures. It also provides reverse battery/power polarity protection for greater LED reliability.

A typical constant-current source used for driving a string has a maximum (open circuit) output characteristic volt­age, called the ‘compliance voltage’, that will appear across any LED in the string that fails to open. That event trig­gers the associated PLED device to turn on and maintain cur­rent through the rest of the LED string. With a properly designed LED-string lu­minaire, the failure of a single LED is not critical and is rarely even noticeable.

LEDs connected in series are increasingly popular in a wide range of applications, from fluorescent tube replacements to large screen backlighting to automotive rear combination lamps and dashboard instrument clusters. Protecting these strings from open or short-circuit failures is critical. Solutions will depend on topology. This article has illustrated a number of approaches using constant current controllers and boost-based LED drivers, as well as independent, discrete protection devices.