LED Standards Development is Far from Over

An overview of developments for current and future LED performance standards in the United States.


Developing standards is unglamorous work, but nonetheless critical to ensure that the performance and safety of LED-based illumination can be tested and characterized to internationally agreed benchmarks. Moreover, the use of international standards encourages better lighting design and underpins consumer confidence in LED products.

In the early days, the lack of standards for LEDs created confusion in the market. Variations in testing methods and terminology from one manufacturer to another made it difficult to compare new LED products with other light sources, as well as with other LED products from different makers.

However, in recent years, organizations such as the U.S. Department of Energy (DOE) have worked closely with standards-setting bodies to accelerate the development and implementation of a suite of standards for solid-state lighting (SSL). Groups such as the Illuminating Engineering Society (IES), the National Electrical Manufacturers Association (NEMA), Underwriters Laboratories (UL), and the International Electrotechnical Commission (IEC) have been collaborating for over a decade. The result of their labors is a family of standards and methods familiar to engineers working with LEDs. However, the work is far from complete and several additional standards have reached an advanced stage of development.

This article summarizes the main standards that apply to contemporary commercial LEDs and LED-lighting fixtures and looks at standards that are currently being drafted and will further improve the quality, reliability, and safety of LEDs.

Engineers working with LEDs will be familiar with a few key standards that detail test and characterization of solid-state lighting. First among these key standards is LM-79 “Approved Method for the Electrical and Photometric Testing of Solid-State Lighting Devices,” which details how to calculate LED luminaire efficacy (net-light output divided by the input power (lm/W)). Luminaire efficacy is the most reliable way to measure LED-product performance, quantifying luminaire performance as a whole instead of relying on traditional methods that separate luminaire ratings and fixture efficiency. (See the TechZone article “The Latest Testing Requirements for Solid-State Lighting.”)

The second key standard is LM-80 “Approved Method for Measuring Lumen Depreciation of LED Light Sources”. LM-80 is a test procedure designed to indicate how quickly LED-relative-light output declines in order to give some indication of how long, barring the occasional catastrophic failure, a user might expect a product type to remain fit for use.

The standard works under the premise that LED failure is the point at which light output has declined to 70 percent of initial luminous flux in lumens (abbreviated as L70). Testing LEDs to the actual point of failure is impractical because modern devices can last in excess of 50,000 hours (nearly six years). Consequently, the results from the LM-80 test are used in conjunction with Technical Memorandum (TM) 21. TM-21, “Projecting Long-Term Lumen Maintenance of LED Light Sources”, specifies a recommended method for projecting lumen maintenance of LED-light sources based on LM-80 collected data. (See the TechZone article “Determining LED Rated Life: A Tricky Challenge.”)

Manufacturers have embraced the LM-80 and TM-21 standards because they quantify one of the key advantages of LEDs over other light sources: longevity. In addition, manufacturers are required to measure the lifetime of their devices to an agreed standard in order to meet regulatory agency criteria. ENERGY STAR requires LEDs to last for 25,000 hours in a domestic environment and 35,000 hours in a commercial one.

With appropriate temperature management, modern LEDs easily make this grade. Seoul Semiconductor’s Acrich series of white LEDs, for example, are capable of L70 lifetimes of over 40,000 hours at a junction temperature of 80oC (Figure 1). The Acrich LEDs typically produce 72 lm at an efficacy of 118 lm/W (at a forward voltage of 6.1 V and forward current of 100 mA). 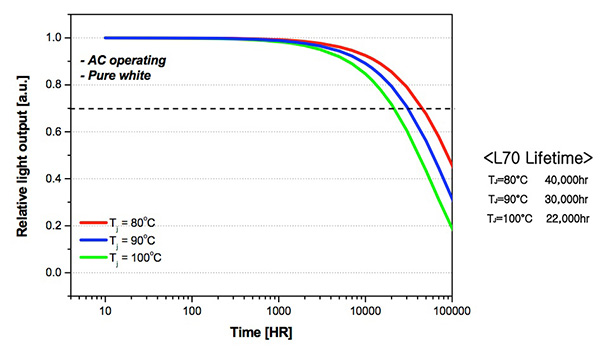 A third standard builds on the LED reliability and lifetime characteristics by introducing the effect of temperature. Since excessive temperature is a well-known killer of LEDs, this information is extremely valuable. LM-82, “Approved Method for the Characterization of LED Light Engines and LED Lamps for Electrical and Photometric Properties as a Function of Temperature”, provides a method for measuring the lumen degradation of light-engine products at various temperatures.

Figure 2 shows that for junction temperatures above 130°C, LED life is compromised. (The graph shows the B50, L70 lifetimes of tested sample. [“B50” indicates no more than 50 percent of a sample of LEDs would be expected to have their light output drop below the target-lumen maintenance level]). The tested device is a Philips Lumileds LUXEON Rebel white LED (235 lm, 135 lm/W, 2.9 V, 700 mA). 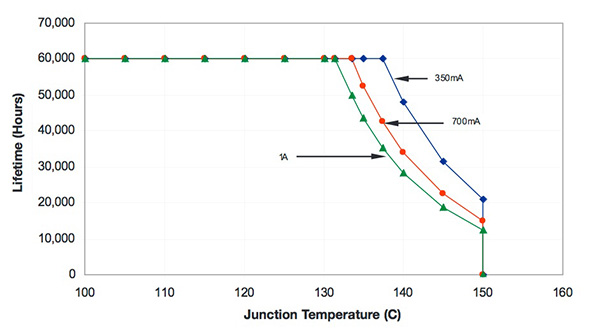 Another key standard, because it specifies the minimum safety requirements for SSL components, including power supplies and control circuitry, is UL 8750 “Safety Standard for Light Emitting Diode (LED) Equipment for Use in Lighting Products”.

Design engineers working with LEDs will be familiar with the key standards, but might also be surprised to learn of the publication of several others that have received less publicity. Nonetheless, these standards, issued by NEMA, are equally useful and cover various aspects of SSL design, manufacture, testing, and installation.

NEMA has continued its good work with the release of LSD 45 “Recommendations for Solid-State Lighting Sub-Assembly Interfaces for Luminaires,” which provides guidance on the design and construction of interconnects for SSL applications, and SSL 3-2011 “High-Power White LED Binning for General Illumination”, which provides a consistent format for binning-color varieties of LEDs during production and integration into lighting products. Finally, NEMA has issued SSL 4 “Retrofit Lamps: Minimum Performance Requirements”, which provides performance-criteria standards for integral LED lamps, including color, light output, operating voltage, and electrical characteristics.¹

As the LED market has matured it has become apparent that the work on standards for SSL technology is far from over, with standards and test methods becoming more focused on specific product types and characteristics.

For example, it was quickly recognized that although engineers could use LM-80 and TM-21 to determine the lumen maintenance of LEDs, once incorporated into a fixture, the LED’s longevity can be affected by factors such as heat, power supply fluctuations, and mechanical stress that were not present during the original test. There was no standardized way of testing how severe the effect of these factors might be, and consequently no way of improving their fixture design to maximize the product’s lifetime.

Test procedure LM-84 “LED Lamps, Engines and Luminaire Lumen and Color Maintenance Test”, addresses this oversight and is in its final approval stage with the IES committee. The document describes the procedures required to obtain uniform and reproducible lumen and color-maintenance measurements under standard operating conditions.

Like its counterpart LM-80, LM-84 only provides data on how well the fixture’s color and luminosity are maintained over a relatively short period. IES is progressing toward an approach that will combine the LM-84 testing data on lighting fixtures with a new TM-28 document that standardizes methods for projecting the measured data over (much) longer periods (Figure 3). (Also see the TechZone article “Standardized Testing for LEDs Extends to Lighting Fixtures”.) 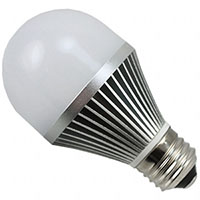 Other standards that are currently in development include LM-85 “Approved Method for the Measurements of High Power LEDs”, which addresses measurements for high-power LEDs that require a heatsink for normal operation, and TM-26 “Projecting rated life for LED packages”. This latter standard will provide more information than the LM-80 test because it will address that test’s weaknesses by increasing the sample size (which is typically small in the LM-80 test) and including all LEDs from the sample in the test results (including those that have catastrophically failed rather than just faded).

Standards that have been proposed, but are yet to be developed, include: LM-XX4 “Method for the Electrical and Photometric Measurements of Organic LED (OLED) Light Sources”, LM-XX5 “LED Reliability Tests”, and LM-XX6 “AC LED Measurements”.²

Over time, as the standards under development and proposed standards are introduced, they will remove the guesswork about comparative-product performance, making it easier for designers and lighting engineers to select the best product for a particular application.