With the adoption of LEDs for general lighting applications, color precision is vital.


When LEDs were primarily used as indicators on electronic equipment, a color palette of green, amber, and red was enough. And it wasn’t all that important that the color indicators be precisely consistent from one LED to the next. But with the adoption of LEDs for general lighting applications, color precision is vital.

Today, lighting system designers for commercial and residential use must be able to specify the precise color of the light source, and be sure the color is consistent from one product to the next. As a result, design engineers must understand exactly how and with what precision the color of light can be specified.

The American National Standards Institute (ANSI) and other standards organizations have defined standards for specifying the color of a light source’s output. Although the basis for the standards dates to early in the last century, they are continuously being refined based on new developments.

The fundamental way of describing color was established by the Commission Internationale de l'Eclairage (International Commission on Lighting, or CIE) in 1931. Space is described in terms of three coordinates – x, y, and z – in which x, y describe the chromaticity (color) while y defines the luminance (brightness). Thus, using the diagram seen in Figure 1, a color could be specified simply by giving its x, y coordinates. 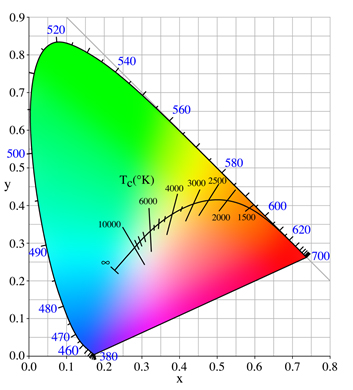 Figure 1: CIE xy 1931 chromaticity diagram including the Planckian locus. Lines crossing the locus are lines of constant correlated color temperature. Monochromatic wavelengths are shown in blue in units of nanometers.

Within the CIE 1931 x, y chromaticity space, a line is drawn to represent the color that an incandescent black-body would appear to radiate with changes in the black body’s temperature (called color temperature and given in kelvins). This line is called the "black body locus" or "Planckian locus". The lines crossing the locus indicate lines of constant correlated color temperature, where the perceived color most closely resembles that of an ideal radiator at the same brightness and under specified viewing conditions.

The quadrilaterals roughly coincide with the lavender ellipses called MacAdam ellipses, named for David Lewis MacAdam, who, in the 1940s at Eastman Kodak, attempted to measure how people perceived variations in color. The size of the ellipse is based on standard variance, called "steps." A one-step MacAdam ellipse is one in which every point of the circumference is exactly one standard variance from the center point. Such a region defines what x, y chromaticity coordinates can be acceptably associated with a target CCT.

The MacAdam ellipses shown in Figure 2 are seven-step ellipses, which the U.S. Department of Energy had set as a standard for compact fluorescent bulbs. The ANSI chromaticity specification was developed to be as consistent as possible with existing fluorescent lamp standards, and to reflect the current and near future state of SSL technology and color binning capabilities. ANSI recommends that lamp manufacturers stay within a four-step ellipse. 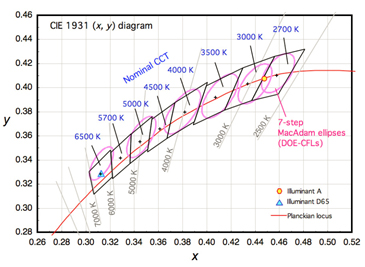 According to OSRAM SYLVANIA, this tighter requirement gives lamp manufacturers a fairly wide range of perceptible differences, since a point on the circumference of a four-step ellipse is eight steps from a point directly opposite it on the circumference. For its fine white binning, OSRAM bases its CCT quadrilaterals, commonly referred to as bins, on a three-step ellipse (Figure 3). Other manufacturers, such as Cree and Avago, also use refined binning to provide closer matching of color. Each manufacturer typically publishes these binning charts in their datasheets. 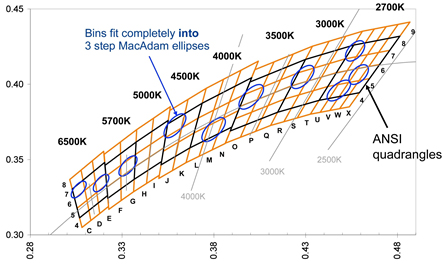 Figure 3: OSRAM chromaticity chart for its white fine binning, with CCT quadrilaterals based on a three-step MacAdam ellipse. (Source: OSRAM)

According to OSRAM, differences in the colors enclosed in a three-step ellipse are indistinguishable by most people. However, some industry professionals claim that under some circumstances, even differences in colors within a two-step ellipse may be discernable. But what is certain is that users can purchase LEDs today and know exactly what color range they will be working with.