Signage is among the most challenging LED applications. It encompasses a large and diverse market that includes monochrome informational signs (e.g., entrance and exit signs) and simple message signs.


Signage is among the most challenging LED applications. It encompasses a large and diverse market that includes monochrome informational signs (e.g., entrance and exit signs) and simple message signs; multi-color destination signs in bus and train stations; and displays inside the buses and trains. RGB applications include large and small displays in sports stadiums and multimedia billboards that use thousands of LED driver chips. A large billboard-sized sign adjacent to a highway, for example, can integrate 125,000 or more devices.

Large LED signs are composed of modules that include LEDs, drivers, power supplies, control units, sensors and some sort of processor that originates the LED sequencing data. An RGB signage display with a high refresh rate typically requires an MCU on each module to implement color calibration. The MCU is also critically important for handling contingencies after the LED sign/display has been deployed in the field. Over time, LEDs change color and sometimes fail. Modules begin to fail as well. The MCU stores information about the old module’s operating characteristics. This allows for the correct color calibration of the new module. Figure 1 shows the major components of a high-end signage display that might be found in a sports stadium.

The components of most interest in this article have the following primary characteristics:

LED color is adjusted using PWM brightness control technology and there are two options. One method is implemented in software with the control information carried over an SPI interface. This method is often referred to as soft PWM. The other method employs LED driver chips that have integrated PWM capability. Each option has its advantages and its disadvantages. (Soft PWM does not eliminate the driver chip. It just allows a less expensive driver to the used.)

In addition to PWM capability, the driver chip must have gain control, which is a linear adjustment for all channels to accommodate the variation in LEDs. The LEDs are invariably drawn from different process lots and therefore have at least slightly different colors when driven with the same current. Gain control allows designers to adjust them all at the same time and manage all the drivers.

Two advantages of the hardware solution are (1) the software development is easier and faster; and (2) a two-layer board can be used instead of the four-layer board.

The soft PWM solution requires a four-layer board because data transmitted over an SPI interface running at 20 MHz is susceptible to noise. Hence, a good ground plane is needed, as well as many options for routing traces. The board should be nearly perfect in terms of noise attenuation.

Soft PWM saves some time in hardware design, but its most important benefit is that is it is less expensive. Importantly, design teams with good software development skills do not have to give up accuracy or control granularity to achieve the same performance as the chip-based solution. In China, in particular, some designers are using soft PMW to create displays superior to displays that use drivers with PWM and other features. All these features add cost to the chip and because hundreds or thousands of drivers are required, using lower cost driver chips outweighs the cost advantages of using a two-layer board.

Row pitch is an important consideration in signage and it varies with application. A destination sign in a train station, for example, is typically not viewed from a short distance, but from tens of meters away. Here, a 6 mm pitch is sufficient. But for a video display, the rows must be narrow to avoid fuzzy images. A video display with a 4 mm pitch requires more LEDs, which means more drivers and more outputs because each output on each driver is driving a single color LED.

Power consumption is another important factor. Sometimes, this is due to the sheer size of the sign, i.e. to minimize operating costs. In other instances, power can be important for less obvious reasons. A monochrome display on a bus, for example, typically runs off the bus’ generator. However, the sign usually remains on when the engine is off, which depletes the battery.

A key to low-power consumption is a very low forward voltage. Power supplies based on DMOS transistors, such as boost and buck converters similar to STMicroelectronics’ L5973D013TR buck converter, are inherently capable of working with low dropout to improve the efficiency of the application. Two additional design characteristics to look for are the ability to select different output voltages and pin-out compatibility that allows the user to choose different devices without having to change anything on the board.

All signage applications share a few common design techniques such as voltage selection, regulating current in a group of modules and daisy chaining. The remainder of this article will consider these topics.

The LED supply voltage (VLED) is selected by weighing four key factors. These include:

The minimum LED supply voltage can be calculated from the following formula:

In order to take into account changes in the parameters noted above, the LED supply voltage should be higher than VLED,min, but it should not be allowed to range too high because power dissipation must remain low. Equation 2 (below) provides this voltage figure.

VDD is the device voltage supply, IDD the device supply current, and VO,I and ICHi are, respectively, the voltage drop across the current generator and the channel current. In particular, the power dissipation should be kept below the maximum power dissipation, defined as:

Tj and Ta are the junction and the ambient temperature and θja is the junction-to-ambient thermal resistance.

Choosing the optimal LED power supply voltage is a trade-off between the theoretical value calculated above and other factors. First, the desired LED current is produced and – importantly – that power dissipation is kept as low as possible. It should be noted that significant variability of LED forward voltage is an expected characteristic of LEDs. Red LEDs have a lower forward voltage than green and blue, for example.

When driving an RGB display, the voltage supply has to be high enough to switch the green and blue LEDs. Driving the red LEDs with the same voltage, however, results in an increase of the power dissipation and consequently a loss in system efficiency. In small signs, the difference may not be important but in reasonably large, narrow-pitch displays that contain tens of thousands of LEDs, the losses add up quickly. Moreover, in over-voltage conditions, the red LEDs can also cause an erroneous report of a shorted LED condition. (Most drivers have a fault-protection feature.)

There are two design approaches to handling this situation.

The first approach is a common practice in which the designer simply adds a resistor in series to each red LED so that the voltage excess drops across the resistor instead of dropping across the current generators. This solution achieves a significant reduction of the power dissipated by the chip and therefore avoids the false fault-protection scenario. It does not, however, address the problem of total power dissipation because power is still wasted on the series resistor.

Besides the loss in system efficiency, this approach also has a negative impact on system cost because heat generated by the resistor has to be dissipated effectively to ensure that the LEDs do not overheat and suffer from color degeneration and possible failure.

Figure 2 shows a superior solution that uses two separate voltage rails: one for blue and green LEDs (VLED) and one for red LEDs (VLED_RED). VLED_RED is derived from VLED by using a switching regulator.

This solution delivers much improved power dissipation results. Voltage rails are tailored to the type of LEDs they drive. Wasted power and heat are significantly reduced as well. 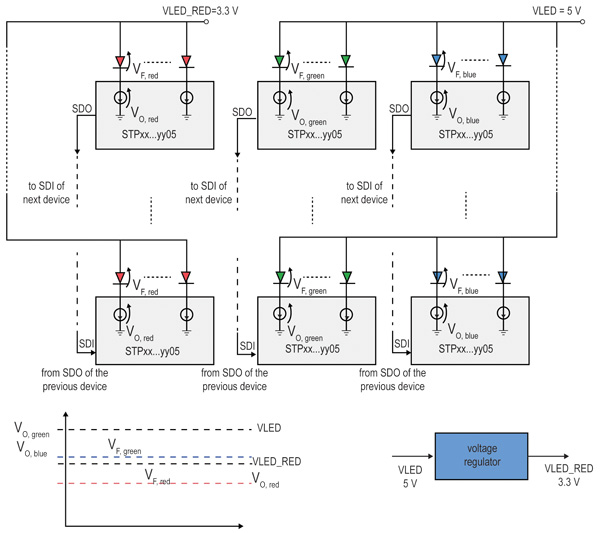 Daisy chaining LED drivers in a design is the commonly accepted solution to the challenge of controlling thousands of LEDs. A driver daisy chain is shown in Figure 3. This solution assures that all ICs in the chain share some serial interface signals such as CLK, LE and OE (clock, latch and output-enable). 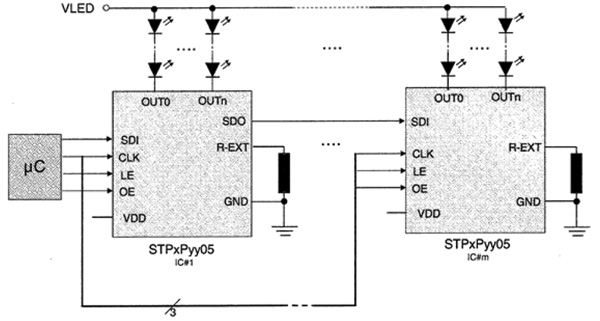 Whenever information generated by the controller for the LED display is updated, a new data packet is generated that contains the number of bits necessary to drive each device (4, 8, 16 or 24) multiplied by the number of devices contained in the chain; in other words, a large number. When devices are connected in a daisy chain, designers must keep two key issues in mind:

When it is necessary to regulate the current of a group of daisy chained devices, the solution shown in Figure 4 can be used. Although this is a common and workable solution, it is not the only way to address the problem. 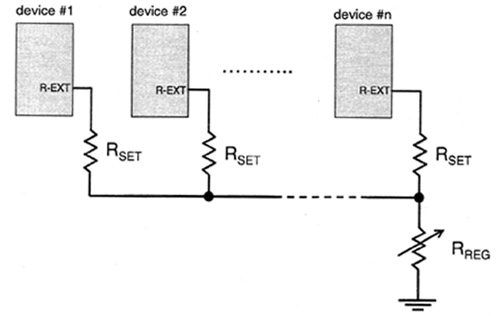 Figure 4: Example of current regulation for multiple devices at the same time (Courtesy of STMicroelectronics).

LED signage applications take the expertise needed for a successful design up a couple of notches from simple status light or even monochrome message signs. Hundreds of thousands of LEDs can be involved in a stadium sign that runs video, which makes the clever utilization of resources a critical consideration. Trade-offs can be made between feature-packed driver chips and software implementations, for example, and even straightforward, simple designs for providing the correct voltage to different color LEDs must be carefully considered. This is just as true of power consumption, which can be significantly impacted by the line pitch of the design, supply voltage selection and current control. Solutions have been presented in this article for several key features of the design, but many more need to be considered by the design team.