As manufacturers strive for market share in the burgeoning LED lighting market each tries to outdo the other with ever-improving efficacy claims.


As manufacturers strive for market share in the burgeoning LED lighting market each tries to outdo the other with ever-improving efficacy claims. But just how far can the LED chip makers go and how soon will they get there?

This article briefly explores the historical trend of improving efficacy of high-brightness LEDs, considers the theoretical efficiency limits, and takes a look at how contemporary devices stack up. Finally, the article takes a look at what manufacturers such as Cree and OSRAM are up to in their R&D labs to find out how tomorrow’s chips will perform.

From a purely scientific consideration, there are several ways to measure the luminous “efficacy” (i.e., the ability to achieve the desired result) of a light source. But as we are concerned with mainstream lighting here, the most useful definition from an engineering perspective is the ratio of luminous flux (lm) emitted to the electrical power used to power the light source (W).

Luminous flux is the measure of the perceived power of light adjusted to reflect the varying sensitivity of the human eye to different wavelengths of light (i.e., the light which we actually “see”). It differs from radiant flux, which is a measure of the total power of the electromagnetic radiation emitted from the light source, including infrared, visible light, and ultraviolet.

Measuring luminous efficacy (lm/W) this way is useful for lighting applications because it takes into account how much power is wasted generating heat and nonvisible electromagnetic radiation rather than visible light.

The quest for better lighting

LEDs have several advantages over traditional incandescent bulbs: compact dimensions, longevity, and robust construction are on the list, but efficacy (or efficiency, which is a slightly different measure of a device’s performance) is the feature that comes up most in comparisons.

That’s not a tough battle for LEDs to win, because incandescent bulbs convert electrical power into around 95 percent heat and only 5 percent light. And, even after over a century of development, the overall efficacy of incandescent bulbs has only improved from 1.5 lm/W to 16 lm/W.¹

But to carve a sizeable niche in today’s mainstream lighting market, LEDs will need to do more than displace incandescent bulbs. Fluorescent tubes and related compact fluorescent lights (CFLs), for example, are much more competitive, boasting efficacies of up to 100 lm/W.

The LED chip manufacturers are rising to the challenge. And progress has been dramatic; where fluorescent tubes took 60 years to double in efficacy, LEDs took just a decade to improve over 10 times (Figure 1). 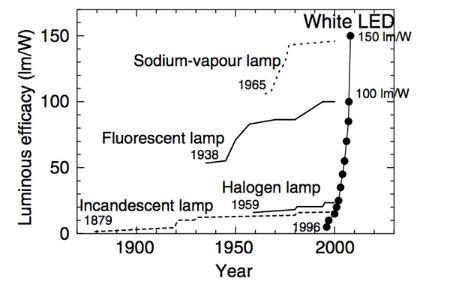 When high power white LEDs were first commercialized in 1996, LED luminous efficacy was about 5 lm/W. Today, for example, commercial chips such as Everlight Electronics’ Shuen 1W Series and Lite-On’s LTPL Series boast efficacies of 90 and 95 lm/W, respectively (at a current of 350 mA). And, as we shall see below, things are about to get much brighter.

Overall efficacy of LEDs is influenced by the efficiency of four processes.²

The rapid increase in LED efficacy has come about because scientists and engineers have been able to improve the performance of the devices in each of these areas simultaneously. For example, light extraction efficiency has improved by changing the shape of the die, roughening the surface, and encapsulating with a material of a refractive index close to that of the semiconductor (see TechZone article).

Knowledge of the physics behind these processes allows scientists to make reasonable estimates as to the natural limits to LED efficiency. For example, it is known that internal quantum efficiency is influenced by a phenomenon known as efficiency droop, which causes efficiency to drop as drive current is increased (see TechZone article).

It turns out that the theoretical limit for white LEDs (using a blue LED and yellow phosphor, see TechZone article) is around 263 lm/W.³ (Incidentally, the highest possible efficacy of any light source is pure green light at a wavelength of 555 nm which can reach 683 lm/W.4)

But still more efficient LEDs are lighting up R&D labs across the world.

In March 2011, for example, OSRAM set a new laboratory record of 142 lm/W (at 350 mA) for the efficacy of a warm white LED light source. Warm white LEDs are designed to mimic the ‘warmth’ of the light emitted by an incandescent bulb. The company’s test chip has a correlated color temperature (CCT) of 2755 K and a color rendering index (CRI) of 81.

“If we explore this technical approach further and allow deviations from the Planckian curve we should even now be able to achieve higher efficiency values of up to 160 lm/W for a CCT of 3000 K,” explained Dr. Norwin von Malm, Predevelopment Manager at OSRAM (Figure 2). “If we apply this approach to a 2-mm² chip we can improve efficiency by a further 10 to 15 percent for the same operating current. We would then expect 180 lm/W for a pure warm white LED and good color rendering.” 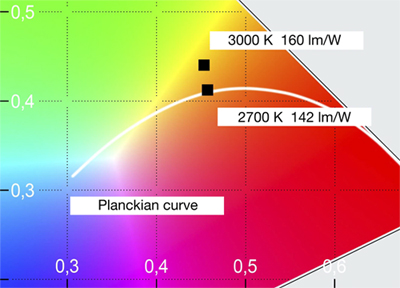 Figure 2: OSRAM’s warm white LED set a new record for this type of device at 142 lm/W. By deviating from the Planckian curve, the company expects to push the record to 160 lm/W.

For its part, Cree broke the 200-lm/W barrier (Figure 3) for a white power LED with a CCT of 4579 K and then in May 2011, the company announced it had produced a device with a remarkable efficacy of 231 lm/W (at a drive current of 350 mA) using a single-die component. 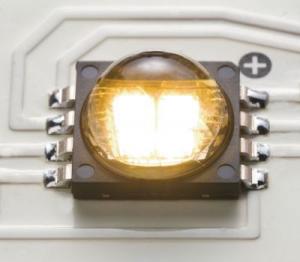 Figure 3: Cree’s white power LED was the first to break the 200-lm/W barrier.


Elsewhere, researchers at Nichia (the Japanese company that invented the high-brightness blue LED that is used as the foundation of most “white” LEDs) have taken the white LED's luminous efficacy a step further. The company has achieved values as high as 265 lm/W (at 5 mA), or 249 lm/W at (20 mA), values that nearly reach the theoretical limit. However, because the drive current is so low, the luminous flux is poor at about 14.4 lm

Flattening of the curve

The trend indicated in Figure 1 shows the rapid increases in LED efficacy show no sign of slowing just yet. And with a mainstream lighting market for LEDs potentially worth billions of dollars, manufacturers are not shy about pouring hundreds of millions into R&D.

But with only around 30 lm/W to go before experimental devices with practical luminous flux levels hit the theoretical limit, the efficacy curve is likely to flatten out soon. Nonetheless, it will still take lots of development for these experimental devices to reach volume production - so don’t be surprised to see regular news on steadily improving devices for years to come.