LED-driver manufacturers incorporate power-factor correction as well as primary-side regulation to lower cost and flyback topology to simplify the design.

LED lighting designers are generally looking for LED drivers that provide low power loss, a smaller system package and, of course, lower cost (while still providing high reliability) for applications in the low- to mid-power range.  To meet this demand, LED-driver manufacturers in their latest efforts have been incorporating power-factor correction (PFC) circuitry for higher power quality as well as primary-side regulation (PSR) to lower cost by eliminating secondary feedback circuitry. They are also using flyback topology to simplify the design.

LED driver manufacturers use PFC circuitry in their designs to achieve better power quality – lower power loss – to meet various regional regulatory standards. PSR does a couple of other beneficial things: it eliminates the output current sensing loss and all secondary feedback circuitry, which enables development of a higher-efficiency LED driver without a big accompanying price tag. It also permits higher reliability because it regulates the LED-driver output voltage without secondary feedback circuitry.

One example is Fairchild Semiconductor’s FL7733A single-stage PSR flyback LED driver. This LED driver is designed to deliver constant brightness and instant flicker-free turn-on of LED lighting. The FL7733A with PSR lowers component count in low- to mid-power LED converters, eliminating the need for an input bulk capacitor and secondary feedback circuitry, which also drives down cost. Further contributing to space savings is the FL7733A controller’s small 8-pin small-outline package (SOP). The device is well suited for SSL downlights, as well as PAR and A19 bulb applications.

The FL7733A LED driver (Figure 1) can be used in a variety of 5 watt (W) to 60+ W indoor and outdoor LED applications. The LED driver also provides tight constant current regulation, high-power factor (PF) and low total-harmonic distortion (THD) so it can meet the requirements of many regional markets.  It meets global standards with <10 percent THD at universal-line voltage conditions, which is significantly less than 30 percent THD included in most regional regulations, according to Fairchild. Together, Fairchild said, these features help designers meet global standards and regulations for LED lighting in a single solution.

The high PF of >0.9 and low THD are achieved by minimizing turn-on fluctuation. In the flyback or buck-boost topology, constant on-time and constant frequency in discontinuous-conduction-mode (DCM) operation enables high PF and low THD. In general, the industry has acknowledged that DCM is commonly used for PSR flyback topology because it delivers better output regulation. 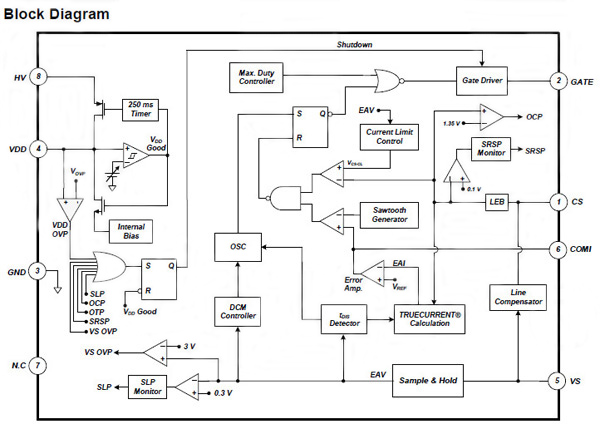 In addition, the LED driver has an integrated high-voltage startup circuit that implements fast startup (<200 ms at 85 VAC) and high system efficiency. The device uses adaptive feedback loop control during startup to set the initial feedback condition close to the steady state so there is no over- or under-shoot of LED current.

Thanks to Fairchild’s TRUECURRENT technology for tight-tolerance constant-current output, the FL7733A enables designs with constant-current tolerance of less than ±1 percent over the universal line voltage to meet LED brightness requirements. TRUECURRENT works by regulating accurate constant LED current independent of several factors -- input voltage, output voltage, and magnetizing-inductance variations. One of the key reasons why accurate constant control is so important in LED lighting designs is because current is what determines the LED brightness. Without tight control, brightness will likely vary from lamp to lamp. It also could result in a shift in color from lamp to lamp.

The LED driver delivers flicker-free constant brightness over a wide operating range with < ±3 percent constant-current tolerance over all conditions and < 0.2 second startup performance. Another key feature is compatibility with high-voltage LED modules with an ultra-wide output voltage range of 10 percent to ~100 percent.

For designers who also are concerned about the supply chain, in addition to reducing the bill of materials (BOM), it also simplifies things by providing one solution for 5 W to 60+ W designs.

In addition, the device offers single-stage PSR along with high PF and low THD with protection features. The IRS29831 (Figure 2) is primarily targeted at LED-driver applications up to 25 W using an isolated or non-isolated flyback converter or buck-boost topologies.

One of the key things that LED-driver manufacturers have continued to work on over the past several years is higher integration for a number of reasons including cost and ease of design. The IRS29831 integrates an LED-driver control IC and power MOSFET using 700 V technology, which contributes to a lower BOM cost and space savings. This device also features high-voltage startup, providing a simple single-stage solution while still maintaining a high PF and low THD for improved efficiency. 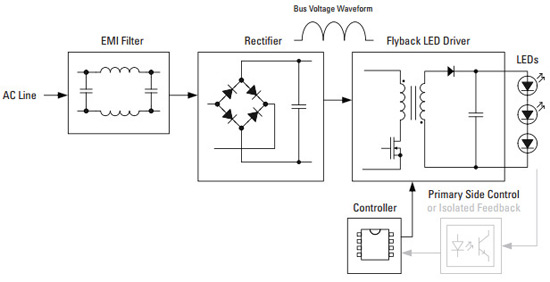 If that isn’t enough, the IRS29831 also features critical-conduction mode operation with discontinuous and burst modes at light load. It allows users to configure isolated designs without an opto-coupler. The control IC is housed in an 8-pin DIP package.

In summary, for low- to mid-power LED lighting applications, PSR flyback LED drivers with DCM operation can achieve high efficiency, high PF, and low THD to meet LED lighting requirements around the globe. These designs also offer the benefits of a lower BOM to reduce space and overall cost, while simplifying product design. These are all factors that designers are continually looking at as part of their overall design requirements.