One of the biggest challenges that engineers face is how to simplify their designs without sacrificing performance or functionality.


One of the biggest challenges that engineers face is how to simplify their designs without sacrificing performance or functionality. For LED lighting, designers would do well to evaluate their LED driver options very closely. Many of these drivers integrate multiple components, including MOSFETs and circuit protection devices, as well as other features, enabling simpler designs.

In all cases of component integration, there are always tradeoffs, but which ones designers can live with is determined by each individual application. Two of the biggest concerns for LED driver integration include lack of flexibility and thermal issues.

In this article, we will look at a sample of AC/DC and DC/DC LED drivers that promise to ease design complexity, save space, and accelerate time to market. For example, many LED drivers for incandescent bulb replacement applications integrate 1- or 4-A MOSFETs, which not only simplify designs and reduce design time, but also save board space and cost by cutting the bill of materials (BOM) via eliminating the need for external components. These parts also meet system circuit protection requirements by integrating overtemperature protection, undervoltage lockout, thermal shutdown, and other protection features that improve system reliability. Lastly, these drivers speed up product launches by shrinking design and qualification cycles.

"When everything is integrated, it's very good for the mass market because it's very easy to design with and [the part] offers a very small form factor," said Jim Patterson, systems and applications manager, Lighting Power Products, Texas Instruments, Inc. "That combination makes time to market much quicker, because issues like EMI performance have already been well tested in the package."

Patterson also admits "retrofit lamps are a difficult market due to the size constraints,” adding that “you're taking a light bulb, such as a MR16 or GU10, in very small two-inch-diameter envelopes that have to fit all the electronics."

The primary reason why LED driver manufacturers integrate MOSFETs into their drivers is to help designers reduce board space. "Because you no longer need an external MOSFET, it increases the amount of PCB available for other features, or it reduces the board space to fit into smaller fixtures such as decorative lighting or lighting under cabinets," said Brian Johnson, LED lighting technical marketing manager for Fairchild Semiconductor.

Another big factor is cost. Eliminating the packaging and placement of the MOSFET on the board reduces overall cost, and the integrated device could eliminate other components including a resistor and diode combination, often used to adjust the turn on/ turn off time of the MOSFET. As an example, Fairchild Semiconductor's FLS0116, FLS3217, and FLS3247 drivers with integrated MOSFETs handle that function internally on the chip so it guarantees how fast that MOSFET turns on and off.

A related benefit is reliability. One less part translates into one less part to worry about failing in the driver circuit.

The FLS0116 (Figure 1) with an integrated 1 A, 550 V MOSFET uses an "adopted digital" technique to achieve active PFC. The technique senses where the zero voltage is occurring and then synthesizes the voltage waveform in order to control the current and achieve good power factor (PF). It also automatically detects AC and DC input voltage conditions.

Other helpful features of the FLS0116 include a built-in high-voltage circuit for self-biasing, which means it derives the power directly from the high-voltage input, and programmable oscillation frequency. This allows the designer to adjust the frequency, which affects the size of the inductors required and how the EMI filter is designed. 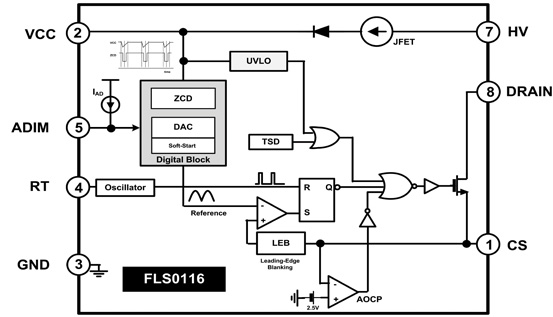 The FLS3217 and FLS3247 (Figure 2) with primary-side regulation (PSR) are set for AC voltage input. The FLS3217 integrates a 1 A, 700 V MOSFET and the FLS3247 integrates a 4 A, 700 V MOSFET. Typical drivers with 1 A FETs are used in candelabra type applications, while drivers with 4 A FETs target some versions of the GU10, A19, PAR20 and MR16 bulbs. The FLS3217 and FLS3247 drivers eliminate the need for several external components, including an optoisolator, thanks to its TRUECURRENT PSR technology. The technology also allows for accurate constant-current control.

Another product of note is ON Semiconductor's NCL30160 constant-current driver with an integrated 1 A, 50 mΩ MOSFET for high-power LEDs, targeting MR16 bulbs. A dedicated PWM input delivers a wide range of pulsed dimming and a high switching frequency up to 1.4 MHz, which allows for the use of smaller external components. Integrated protection features include resistor-programmed constant LED current, broken/open LED protection, undervoltage, and thermal shutdown.

Also targeting MR16 lamp replacements, as well as other 12 V, AC- or DC-input LED lighting applications, is the MAX16840 from Maxim Integrated, which includes a 0.2 Ω (max), 48 V switching MOSFET. What is unique about this product is that it uses a proprietary architecture to control the input current of the lamp for flicker-free, dimmable operation. The design also eliminates the need for electrolytic capacitors, which extend the lifetime of the LED lamp, since these capacitors are typically the first to fail in driver circuits, according to Maxim.

One of Texas Instruments' controller products with an integrated 3.75 Ω, 600 V power FET is the TPS92310 AC/DC constant driver with PFC. It targets LED retrofit bulbs including the A19, PAR30/38 and GU10. This offline converter is suitable for driving 8 W LED loads and below. It also includes protection features such as cycle-by-cycle primary side inductor current limit, VCC under-voltage lockout, output overvoltage protection, and thermal shutdown. TI evaluation boards also are available.

TI has taken integration to the next level with its LED driver micro modules, which eliminate several external components and simplify complex layouts. These modules incorporate all power and passive circuitry required for LED driver designs in a single 10 x 13 x 5 mm package, and can eliminate four or more components.

TI's 450 mA TPS92550 (Figure 3) and TPS92551 (Figure 4) micro modules integrate the entire switching converter in one package, eliminating the need for power supply design resources and simplifying procurement, according to TI. The only external parts required are an input capacitor and a resistor to set the current level. However, if the designer wants to keep the module set at the default current level of 350 mA, no resistor is required. 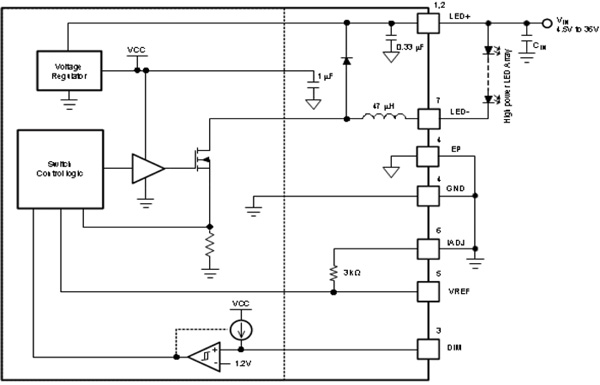 Figure 3: The TI 14 watt TPS92550 DC/DC LED driver module requires no external current sensing elements. With a minimum configuration of 350 mA nominal current output, the LED driver only requires an input capacitor. It is adjustable from 350 mA to 450 mA using an external resistor. Additional capacitance at the output can be added to reduce LED current ripple. (Courtesy of Texas Instruments.) 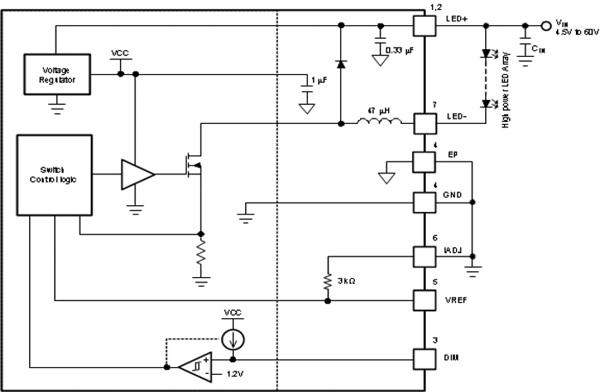 Figure 4: The TI 23-W TPS92551 DC/DC LED driver module, at a minimum configuration of 350-mA nominal current output, only requires an input capacitor. If 450 mA is desired, only a single external resistor is needed. To reduce LED current ripple, additional capacitance can be added at the output. (Courtesy of Texas Instruments.)

As always, there are tradeoffs

Although all of these integrated LED drivers save space, reduce cost, and allow for use in smaller form factors, there are a couple of tradeoffs. One big one is thermal management. With the additional power on the controller due to the integration of the MOSFET, that heat is now being dissipated in the integrated package.

If the designer does not do a good enough job as far as thermal design, it could possibly raise the junction temperature of the IC and reduce the driver's reliability, explained Fairchild’s Johnson.

One of the key things is keeping the thermal junction temperature stable, according to LED driver manufacturers. Fairchild recommends putting as much "free space" as possible around the package in order to transfer some of that heat away from the package. The company also has "maximized the thermal transfer design in the package."

Be sure to look at the junction-to-case thermal resistance (θJC), which is a measure of how good the device is in handling temperature and is typically found on the datasheets. As an example, TI's micro modules have a θJC of 1.9°C/W, which translates into roughly a 2°C rise per watt of power in the device.

"Any time you integrate a power handling device, you have to worry about thermal issues," said Patterson of TI. "We have to make a package that can handle worst-case conditions. In conjunction, the assembly, the layout of the PCB, and entire fixture has to be taken into account."

Patterson recommends that designers use evaluation modules as a template for their layouts, along with other available design tools, including the company’s WEBENCH®.

Most LED driver manufacturers will work with designers to ensure that they are operating the FET within its current and voltage ratings. They also provide design tools and reference designs, making sure the board layout is optimized so it does not create a hotter device.

The other tradeoff is a lack of flexibility. If a designer selects a LED driver with either an integrated 1 A or 4 A MOSFET, that is the current rating for the MOSFET.

Patterson noted that if a designer is developing a platform driver design to cover a large array of power levels, then a fully integrated device might not be the right choice, especially if different switch FETs are required to optimize for efficiency and performance for each solution.

However, integration may not be practical in platform designs that call for the use of different MOSFETs. If a designer selects a LED driver with a 1 A MOSFET, there is no changing the current. Designers must pay special attention to thermal issues, as more heat is dissipated in the package with an integrated MOSFET.