Design options include both external and integrated output versions


Design options include both external and integrated output versions, all of which meet exacting automotive qualification standards.

The usage of lighting-emitting diodes (LEDs) in automotive applications is increasing for many of the same reasons that LED lighting is penetrating non-automotive sectors. LEDs are more efficient and smaller in size, have a substantially longer life, allow considerably greater design freedom for improved aesthetics, and more. In brake lamp applications, the fast turn on of LEDs provides an added margin of safety to warn the driver of the car behind. LEDs can respond as much as ten times faster than traditional incandescent bulbs. In addition to this safety aspect, the color of LED lighting is more natural, making it safer for forward illumination. The ease of controlling LEDs also makes them a natural for intelligent lighting systems that adjust based on vehicle sensor inputs. An essential aspect of the control is the power management provided by integrated circuit (IC) drivers.

According to Strategies Unlimited, a market intelligence firm that focuses on LED lighting, LED lighting penetration of exterior and interior lighting functions continues. Strategies Unlimited analyst Dr. Robert Steele says that as auto production recovers from the recession, so too will sales of LEDs for these applications. For 2010, Steele predicted that the automobile segment would grow by more than ten percent from 2009.

Automotive applications for LEDs include interior lighting (such as dome, dash and footwell lighting), indicator and telltale lights and infotainment backlighting as well as exterior (signaling) functions such as tail lights, turn signals, brake lights (including center high-mount stop lamps (CHMSL), parking lights, side marker lights, fog lamps and daytime running lights (DRLs). More recently, a few vehicle manufacturers have introduced LED headlamps on production models based on high-brightness (HB) LEDs. In some cases, the capabilities of an LED driver can enable more than one application to be addressed with the same LEDs.

With leading automotive headlamp manufacturers AL-Automotive Lighting (Magneti Marelli), Hella, Ichikoh, Koito, Valeo, Visteon and others providing prototypes with HB-LEDs, almost all carmakers have displayed concept vehicles with LED headlights. In fact, at least one headlight manufacturer predicts that several standard vehicles will have LED headlights in 2012. As LEDs continue to improve in efficiency and decrease in cost based on projections from Haitz’s Law (the light output levels from packaged LED devices roughly doubles every 18 months), an increasing amount of LEDs and LED drivers will be used in vehicles.

With the low-power consumption of LEDs compared to conventional lighting, an estimated 0.2 liters of fuel per 100 km and about 4 grams lower CO2 emissions per kilometer are being cited as the ultimate advantage of replacing incandescent lighting with LEDs in the DRL application alone. In electric and hybrid vehicles, an 85 percent reduction in energy consumption from LED usage instead of incandescent bulbs translates into increased range. As a result, there are several compelling reasons to implement LEDs in automotive applications.

LEDs require a constant current to produce consistent lighting. Consequently, this forms the basic operating requirements for an LED driver. The accuracy of the current source determines its customer appeal. Current fluctuations than can occur with voltage supply variations in vehicles must be avoided. Linear regulators provide a simple control and do not require electromagnetic interference (EMI) filters. However, their power dissipation can become excessive for higher power applications. Buck DC-DC converters are commonly used in vehicles as the next step up from a linear regulator. When the driver must control several LEDs in series, a boost converter topology is used. In some cases, a buck-boost topology provides the capability to address a variety of application requirements including the ability to handle voltage extremes.

LED drivers can be designed to offer a combination of series and parallel LED control. Devices with this capability built-in provide circuit designers flexibility to control LEDs in different applications with a single driver rather than requiring different devices that increase qualification testing.

Dimming the light level is a common requirement for interior lighting. However, exterior lighting has applications for brighter and normal requirements from the same LEDs. For example, brake lights/tail lights, low beam/daytime running lights, and high beam/low beam headlights are bi-level lighting. In some cases, lighting design may be able to address both situations with the same LEDs with the right LED driver.

Unlike other market segments, automotive applications have several tougher requirements that are reflected in industry standards and purchasing specifications. These unique criteria include temperature and humidity range, voltage range, ability to withstand harsh chemicals, electromagnetic interference and electromagnetic compatibility (EMC) as well as reliability requirements dictated by qualification testing. For example, the automotive passenger compartment temperature range is -40 to 85°C.

The automotive voltage range extends from normal operation of 9 to 16 V (nominally 14 V) to charge the 12.6 V battery under ambient temperatures from Arizona to Alaska and includes extreme conditions such as reverse battery (-12 V), jump start conditions of continuous double battery voltage (+24 V) to faults conditions such as load dump, which occurs when the battery is disconnected from the alternator, and other voltage transients. An unclamped load dump can be as long as several hundred milliseconds and can easily exceed 80 V but today many manufacturers have centralized load dump clamping circuits and subsequently require that components must withstand the transient for levels of 40 or 60 V. In addition to higher voltage requirements, cranking conditions cause lower voltage that require protection for worst case situations.

High reliability in automotive applications is indicated by the need for protection circuitry such as overvoltage, undervoltage, reverse polarity, overcurrent, short circuit, and overtemperature protection in many ICs. Also, the component’s life must be verified by testing to meet the vehicle manufacturer’s target life and warranty requirements that could be 10 years or 100,000 miles. In general, automotive IC qualification requirements are reflected in tests such as the Automotive Electronic Council’s AEC Q100 series for integrated circuits but individual automotive suppliers and carmakers can require tighter criteria and even further testing.

A power IC process with analog and digital as well as power circuitry allows device designers to integrate the LED power switches with the control circuit — as long as the package can dissipate the power. Integrated LED switches reduce the number of components, saving board space and simplifying inventory and manufacturing. As power levels increase, such as the LED drivers for HB LEDs or when the option for driving LED arrays is desired, a driver, or pre-driver, that controls external discrete output devices provides flexibility with the output switches selected based on the circuit requirements. As a result, a single LED driver can cover the requirements of several applications.

ROHM Semiconductor’s BD8119FM-M is a 4-channel constant current backlight LED driver for medium to large automotive displays such as navigation or dashboard panels. The driver uses an original current mode buck-boost DC-DC converter and requires only a single coil for simplified design. It is packaged in an 18.5 x 9.9 x 2.31 mm HSOP-M28. The BD8112EFV-M is a 2-channel version, suitable for backlighting small-to-medium size TFT displays, for example, the TFT installed in an instrument cluster. It is offered in a HTSSOP-B24 package. The flexible buck-boost LED drive is shown in Figure 1. It has external PWM control and voltage control of the VDAC terminal for brightness control. 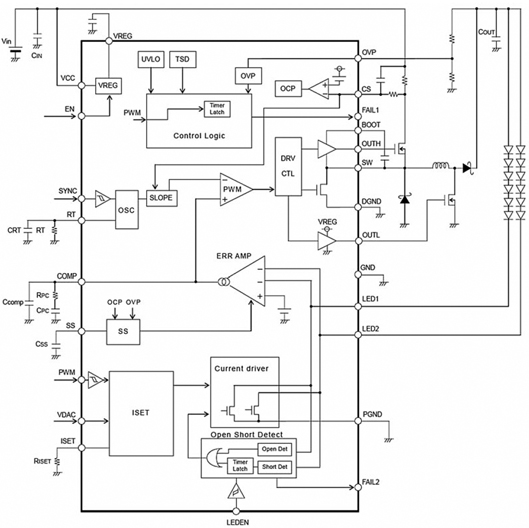 Figure 1: The highly-integrated BD8112EFV-M can drive 150mA through two LED lines and requires a minimal number of external components.

Operating from a supply voltage of 5 to 30 V, the switching frequency of the BD8112EFV-M and BD8119FM-M can range from 250 to 550 kHz with external synchronization option to avoid EMI problems with vehicle radios or other sensitive circuits. A total of 28 LEDs from a 7 x 4-channel matrix can easily be driven by the BD8119FM-M driver with a maximum current of 150 mA per line and even more with a properly configured external circuitry. The driver has built-in LED abnormal state detection for Open and Shorted conditions as well as built-in protection functions including undervoltage lockout (UVLO), overvoltage protection (OVP), thermal shutdown (TSD), overcurrent protection (OCP) and short circuit protection (SCP).

ROHM Semiconductor’s BD8105FV and BD8115F fully-integrated drivers provide serial and parallel control to address telltale indicators for instrument clusters, especially clusters and center stack controls such as HVAC, radio and more. The units require only a few external components minimizing board space. The BD8105FV consists of 12 open-drain outputs (see Figure 2) and the BD8115F has eight open-drain outputs. The maximum DC current for each output is 50 mA with a pulsed maximum value of 150 mA.

The drivers can have at least two devices cascaded in series as shown in Figure 3, so that more LEDs can be controlled without increasing the number of I/O pins of the microprocessor. Packaged in an SSOP-B20W, the devices have thermal shut-down (TSD) circuitry (nominal detection point at 175°C) built in to prevent overheating. 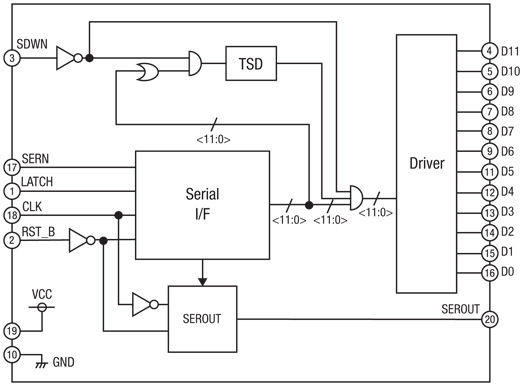 Figure 2: The block diagram of the BD8105FV shows the 12 drain connections to the internal power MOSFETs.

Since the power devices are integrated in the IC, the TSD can protect the 12 outputs from excessive temperature.

ROHM Semiconductor’s newest LED driver is the BD8381EFV-M for driving multiple HB-LEDs in high- and low-beam headlamps as well as daytime running light applications. The BD8381EFV-M is a white LED driver with the capability of withstanding high input voltage (50 V MAX). As shown in Figure 4, a current-mode buck-boost DC-DC controller is integrated to achieve stable operation over varying voltage input and also to remove the constraint of the number of LEDs connected in series. 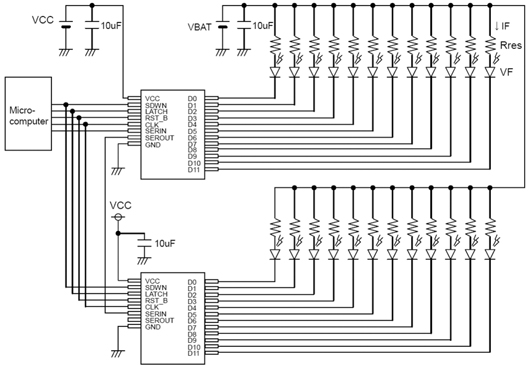 Figure 3: Application circuit for two cascaded BD8105FVs being controlled by a microcomputer with a 4-wire (3-line plus enable) I/F serial input.

The BD8381EFV-M provides dimming by either a built-in PWM or linear control. Operation with or without a microcomputer is possible. The operating frequency can be set internally between 100 to 600 KHz or externally synchronized from the internal oscillator frequency up to 600 kHz. Built-in protection functions include UVLO, OVP, TSD, OCP, and SCP with LED error status detection function for OPEN/ SHORT circuit. The circuitry is housed in an HTSSOP-B28 package. 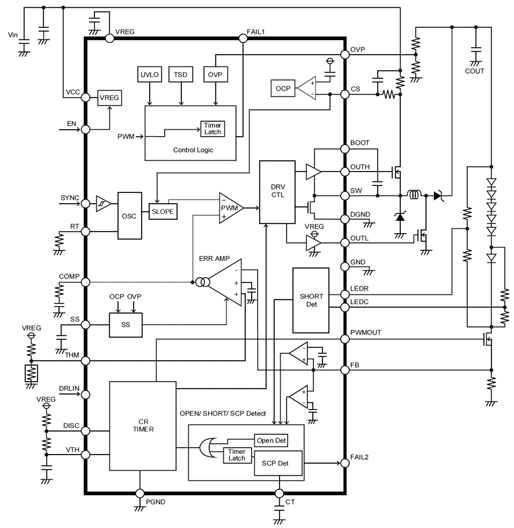