The ZXLD1371 can be integrated into new automotive designs, reducing the inventory across a vehicle design range and cutting the number of on-board components.

Daylight running lamps for motor vehicles are now a legal requirement in Europe. They became mandatory for new cars manufactured from February 2011 and for commercial vehicles from August 2012. Although they now need to be incorporated in vehicles by law, the daylight running lamp provides a number of opportunities for car and van designers to improve multiple aspects of the driving experience and their own brand image.

The key to these improvements lies in the shift to the solid-state technology of the light-emitting diode (LED). Thanks to improvements in the quantum efficiency of the core processes, high-brightness LEDs with the level of reliability required for automotive use are now readily available.

LED-based lamps offer much higher energy efficiency than traditional incandescent bulbs. According to some estimates, the lower power consumption of LEDs for daylight running compared to conventional bulbs can result in a saving of two liters of petrol every 1000 km in a conventional vehicle. They will also improve the effective range of plug-in hybrid and electric vehicles.

A further advantage of the LED-based option for daylight running is the much higher reliability of the components. The longevity of LEDs – they have an effective service life of more than ten years – means they may never need replacing during the lifetime of the vehicle. This provides manufacturers with greater freedom over styling and design, as accessibility for replacement is not as important as with incandescent bulbs.

Furthermore, the smaller space required by LEDs compared to bulbs allows the daylight-running lamps to be placed in a wider variety of locations – all allowing greater reinforcement of the vehicle maker’s brand image. For example, designers can define shapes using strings of LEDs that echo the manufacturer’s logo or which follow the contours of the vehicle for a more aesthetically pleasing shape. 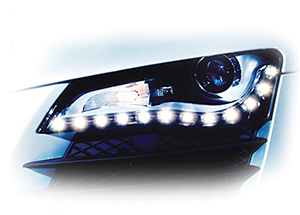 LEDs for daylight running can react better to changes in driving conditions, increasing output when fog descends, for example, or reducing the brightness when the lamps can act as parking lights. As a result, effective dimming control over LED strings is a key requirement of power controllers. However, this is far from the only requirement.

The automotive environment has a number of ramifications for the design of LED-based headlamps, for both daylight and night-time running. There is a clear requirement for the components used in these designs to be developed and qualified to industry standards such as AECQ100 and TS16949. They must function across a wide temperature range that goes beyond that required for consumer-oriented applications, reaching up to +125°C for those parts deemed critical to driving. Because of the close proximity of electronic control units in the front section, low electromagnetic interference is important.

There are electrical requirements that are specific to the needs of LED power and control circuits. Even under normal operation in a motor vehicle, the supply voltage spans the range from 9 V to 16 V. This is sufficient to charge the battery while running in a wide range of temperature conditions, from the subarctic to the tropics. However, the actual voltage can easily move outside these limits.

Input voltages can extend from accidental reverse battery connection to a doubling of the 12 V battery voltage under jump-start conditions to faults that result in load dumping, such as when the battery is disconnected from the alternator, which can happen temporarily if the cables have worked slightly loose.  The result is a transient voltage spike as the alternator attempts to charge a battery that is not connected.

Even with centralized load-dump clamping circuits, components need to be able to handle input voltages up to 60 V. Although there are often protection mechanisms built into the car’s electrical systems, there is also a need for protection circuitry for conditions such as overvoltage, undervoltage, overcurrent, short-circuit and over-temperature.

As well as these fault conditions, the focus on energy-efficient design with the introduction of engine start-stop technology means attention has to be paid to a wider operating voltage range. When the vehicle restarts ready to pull away from a stationary position, the large demand for current from the engine can pull the battery voltage lower than 9 V, often down to as low as 6 V. The challenge for the LED driver is to deliver a well-regulated output voltage and LED current so that even when suffering voltage spikes of 30 V or more, the light produced by the LEDs does not change.

A single regulator topology is not sufficient to deal with the range of conditions that an LED controller must handle. For much of the time, the circuit needs to act as a boost regulator to provide the higher voltage needed for longer LED strings but will need to switch to buck operation temporarily, producing a lower voltage than the supply when the supply voltage increases. For lower-voltage LED chains a buck configuration will be required. To avoid the need for the automotive designer to work with different LED controllers for different layout configurations, the ZXLD1371 from Diodes offers the ability to work in buck, boost or buck-boost modes. Buck-boost mode makes it possible to respond effectively to changes in supply that oscillate around the voltage needed to drive the LED string. A switching frequency of 400 kHz provides high-efficiency voltage regulation. 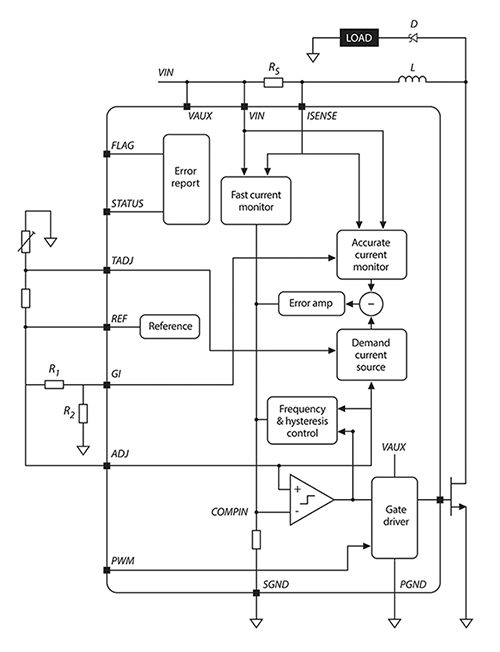 Changing the arrangement of support components such as sense resistors switches the controller between its different power-control modes. To aid design, a calculator application on the Diodes website provides fully-automated component selection to speed up development and prototyping.

The device employs a modified hysteretic control algorithm to provide high current accuracy under any of the three modes. Current accuracy is vital for ensuring that the LEDs are driven to provide a consistent color and output level across changes in supply voltage and between LED arrays. The design ensures a deviation of no more than 5 percent, allowing excellent visual matching between the two or more forward-facing lamp arrays on the front of the vehicle. On-board support for pulse-width-modulation (PWM) dimming makes it possible to control the brightness of the LED string over a 1000:1 ratio – enabling support for high output when driving visibility worsens, and reducing brightness to very low levels for parking support.

With the ability to work across a 5 V to 60 V supply range, the ZXLD1371 can meet the requirement for full battery and alternator voltage support, including conditions such as load dumping. The controller will work in temperatures up to +125°C and includes a thermal protection loop for the LED string to ensure that they do not suffer from excessive current stress in hot conditions.

Integrated fault reporting provides effective integration into the rest of the vehicle electronics. Two pins are used for fault diagnosis. A flag pin signals a fault; the other is a multilevel status pin to provide further information on the nature of the fault, such as over-temperature.

The availability of an integrated LED controller such as this not only reduces the inventory required across a range of vehicle designs, it cuts the number of on-board components, saving board space and simplifying manufacturing. As it is approved to AECQ100 and TS16949 standards, the ZXLD1371 can easily be integrated into new automotive designs, providing manufacturers with access to the benefits of LED-based daylight running lamps.