LCD TVs are popular due to recent technology advances. Much of the improvement can be attributed to the switch to LED backlighting.

Television picture quality is a hot topic. While some still prefer the picture quality offered by plasma TVs, LCD TVs are popular due to recent technology advances. Much of the improvement can be attributed to the switch to LED backlighting, which has replaced cold-cathode fluorescent lights (CCFLs), and enhanced color accuracy and boosted contrast (the difference in brightness between black and white parts of the picture).

Unlike the cells of a plasma screen, the pixels of LCD TVs and LCD computer monitors don’t emit light. Instead, the screen is illuminated with backlight. White light from the backlighting is altered in color and intensity by millions of sub-pixels each comprising a progressive LCD “shutter” and a red-, green-, or blue-colored filter.

Light from the three different-colored sub-pixels combines into a single pixel to produce a tiny spot of the appropriate color and intensity for the image being displayed. Over two million of these pixels form the vivid, bright picture on a high-definition LCD TV.

Backlighting is a critical element determining the quality of the image produced. Not only does it determine the brightness of the picture, it also affects the color accuracy. For example, if the white light has a yellow tinge, red pixels will appear to be slightly orange. Multiplied two million times, this effect will significantly degrade the quality of the image.

Time for the next generation backlighting technology

Historically, CCFLs have served LCD TVs with inexpensive, long-lasting, good backlighting. But as TV and monitor makers strive for better picture quality, the drawbacks of CCFLs have become only too apparent.

CCFLs have a limited color gamut (the range of wavelengths, and hence colors, in the white light emitted), which impacts color accuracy. They also are relatively inefficient – expressed as luminous flux (in lumens) for a given power input (in watts) – of around 40 lm/W, increasing power consumption. Also, as screens are becoming thinner and more durable, the size and fragility of CCFLs render the technology substandard.

LEDs address all of the deficiencies of CCFL backlighting – but at a higher cost. Nonetheless, consumers of premium LCD TVs and computers are prepared to pay for the improvements LED backlighting brings to picture quality. 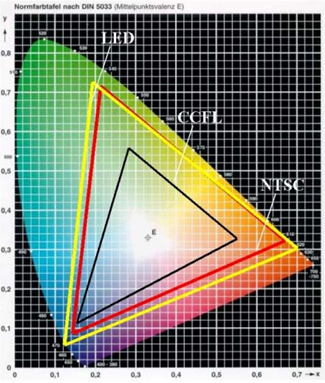 In addition, LED backlighting addresses one of the major remaining differences in the picture quality between plasma and LCD technologies: the degree of contrast. Plasma cells can be selectively turned off, so black areas are truly black, whereas CCFL backlighting can’t, so black parts of the picture remain grey. However, because LEDs can be rapidly turned on and off, selected areas of the screen can be made truly black, improving contrast.

LED backlighting is implemented using either an array of LEDs across the whole screen area, or by using edge-mounted LEDs combined with a light diffusion panel.

As the name suggests, edge mounted LEDs are positioned around the periphery of the screen and a special panel diffuses the light from the LEDs across the screen. Edge-mounted LEDs allow the production of panels measuring no more than 10 mm thick but suffer from the disadvantage that areas of the screen can’t be selectively dimmed, limiting contrast compared with an LED array backlight.

The LEDs used for LCD screen backlighting are either white or a group of red, green, and blue (RGB) LEDs that combine to produce white light.

White LEDs are typically blue LEDs combined with phosphor. Blue light from the LED is absorbed by the phosphor, which then re-emits it as white light. The quality of the white light produced can be compromised by the characteristics of the phosphor. In addition, the efficiency of the LED is reduced because energy is lost in the transition of blue light to white light, reducing intensity for a given power input.

White light produced from RGB LEDs is superior to that from white LEDs because it has a wider color gamut and the white point (which determines the actual hue of the white light) can be adjusted to compensate for aging effects. In addition, RGB LEDs produce white light more efficiently than white LEDs because the spectral power distribution of the red, blue, and green LEDs can be optimized to match the transmission spectra of the LCD color filters.

The additional electronic circuitry required to control the constituent colors of RGB LED backlighting is expensive, and the LEDs take up more space because three devices are needed to produce the white light instead of one. 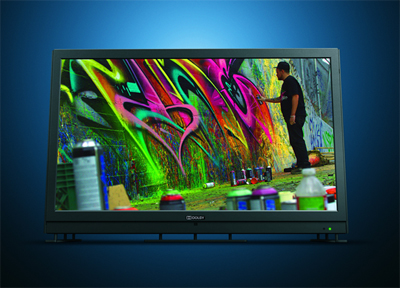 National Semiconductor, for example, produced an application note that describes an LED backlighting solution for a computer monitor using its LM3432 six-channel high-voltage current regulator and LM3430 companion device to supply the high voltage required to drive serially connected LED strings. The company says the LM3430 and the LM3432 provide a complete solution for most high-brightness LED backlighting applications. 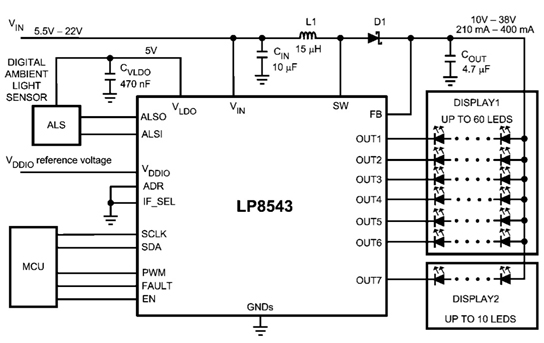 
Similarly, OSRAM has produced a white paper that describes how to optimize and stabilize the white color produced by RGB LEDs. In the paper, OSRAM advises a combination of 64 percent green, 8 percent blue, and 28 percent red produces white with a wide color gamut. The company advises that aging and temperature will affect the quality of the white light the RGB LED produces. The paper describes how to compensate for these effects.

Lastly, STMicroelectronics supplies an LCD panel backlight demonstration board based on its LED7706 LED driver with boost regulator. The demonstration board implements a high-efficiency monolithic boost converter and six controlled current generators specifically designed to supply LED arrays used in the backlighting of LCD panels.

Despite the increased cost of TVs with LED backlighting, the sector is proving to be lucrative. According to U.K.-based analyst group IMS Research, LED sales boomed in 2010 on the back of their popularity for LCD TV backlighting.

Note: Some manufacturers refer to LED backlit TVs as “LED TVs.” Do not confuse LED backlit TVs with very rare examples that use organic LEDs (OLEDs) – which emit light and hence require no backlighting – to replace the LCD pixels in the image panel. Although some small screen sets are available, larger OLED TVs are unlikely to be available before the middle of the decade.