Key Criteria to Evaluate LEDs for your Next Lighting Design

LED lamps, manufactured by many companies, are now widely available for use. The engineers who implement them need to know about and compare specifications to make sure they meet the performance parameters required for their next design.


LED lamps, manufactured by many companies, are now widely available for use. The engineers who implement them need to know about and compare specifications to make sure they meet the performance parameters required for their next design. The successful implementation of LED technology requires an intimate understanding of these performance metrics (as well as of the many industry standards for solid-state lighting; see also the TechZone article “The Latest Testing Requirements for Solid-State Lighting”).

This article will review LED and luminaire specifications that are likely to appear on a datasheet and explain the criteria you need to consider when evaluating different manufacturers’ claims.

For LED modules, the International Electrotechnical Commission/Publicly Available Specifications (IEC/PAS) recommends that designers look at the: Here are some short definitions to help you understand the criteria when you are reviewing datasheets for LEDs in your next design:

f) Rated Color Rendering Index (CRI)
The color rendering of an LED module giving white light is the effect on the color appearance of objects by conscious or subconscious comparison with their color appearance under a reference illuminant.

g) Correlated Color Temperature (CCT)
The color temperature of an LED module giving white light is determined by comparing the light emitted by the LED module with light of an ideal black-body radiator at the given temperature. It is expressed in Kelvin.

i) Lumen maintenance code
The measured initial luminous flux (initial value) is normalized to 100% and used as the first data point for determining the LED module life. The maintained luminous flux (maintained value) is measured at 25% of rated life-time up to a maximum of 6.000 hours, and expressed as percentage of the initial value. The maintained value determines the lumen maintenance code.

j) Rated life of the LED module and the associated rated lumen maintenance (Lx).The length of time during which a population of LED modules provides more than the claimed percentage (x) of the initial luminous flux, always published in combination with the failure fraction. It is expressed in hours.

k) Failure fraction (Fy), corresponding to the rated life of the LED module in the luminaire The percentage (y) of a number of LED modules of the same type at their rated life designates the percentage (fraction) of failures. This failure fraction expresses the combined effect of all components of a module including mechanical, as far as the light output is concerned. The effect of the LED could either be less light than claimed or no light at all.

Let us now look at a datasheet to see what information it provides. The Cree XLamp ML family of LEDs offers information on Luminous flux range (10.7 to 13.9 lumens in “F” group code) and extend to “N3” group code with luminous flux from 56.8 to 62 lumens. CCT range for cool white extends from 5,000 to 8,300 K. The typical CRI for cool white is 75. You can also get information on relative flux versus junction temperature (Fig. 1). Other important pieces of information include how to get the longest life from the LED in your designs. There is also a link to an application note to find out how thermal design, ambient temperature, and drive current affect the LED junction temperature and lifetime.¹ 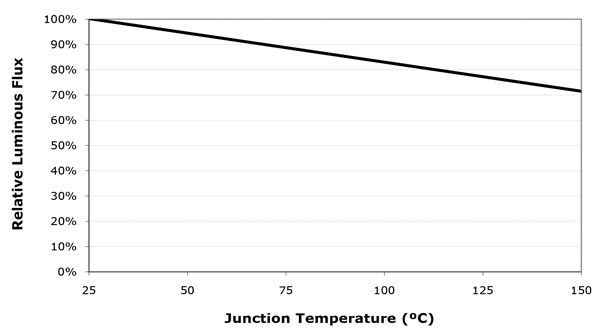 In summary, lighting engineers need to take the time to research details in the datasheet to find the right LED for their project. It is also a good idea to look for application notes and other reading material to discover the nuances of the LEDs you are considering. To further aid you in this effort, the IEC has published IEC/PAS 62717 performance requirement document for LED modules,² as well as the IEC/PAS 62612 for LED lamps self-ballasted for >50 V.³

For more information on the products mentioned here, use the links provided to access product pages on the Hotenda website.