SAN JOSE, Calif. – February 22, 2011 – North America-based manufacturers of semiconductor equipment posted $1.54 billion in orders in January 2011 (three-month average basis) and a book-to-bill ratio of 0.85, according to the January Book-to-Bill Report published today by SEMI. A book-to-bill ratio of 0.85 means that $85 worth of orders was received for every $100 of product billed for the month.

"Orders declined slightly in the January book-to-bill report, although they remain well above January 2010 orders," said Stanley T. Myers, president and CEO of SEMI. "Industry spending remains solid at the start of the year and we are encouraged by the strength in capital expenditure plans announced over the past month."

The SEMI book-to-bill is a ratio of three-month moving averages of worldwide bookings and billings for North American-based semiconductor equipment manufacturers. Billings and bookings figures are in millions of U.S. dollars. 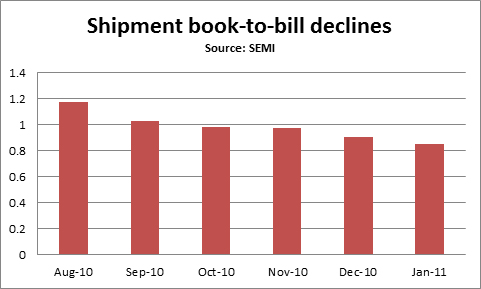 The data contained in this release was compiled by David Powell, Inc., an independent financial services firm, without audit, from data submitted directly by the participants. SEMI and David Powell, Inc. assume no responsibility for the accuracy of the underlying data.

The data is contained in a monthly Book-to-Bill Report published by SEMI. The report tracks billings and bookings worldwide for North American-headquartered manufacturers of equipment used to manufacture semiconductor devices, not billings and bookings of the chips themselves. The Book-to-Bill report is one of three reports included with the Equipment Market Data Subscription (EMDS).