Is 5 GHz the Promised Land for Embedded Wireless Applications?

This article interexamines the trade-offs between ference, range, and speed that need to be considered when choosing to operate in the 5 GHz band or the 2.4 GHz band.

The 2.4 GHz ISM band is frequently referred to as a “junk band” because of interference issues resulting from its heavy use in Wi-Fi, Bluetooth®, cordless phones, baby monitors, and video cameras. The 5 GHz ISM band is relatively free of such interference and provides an attractive alternative for embedded wireless applications. This article will examine the trade-offs between interference, range, and speed that need to be considered when choosing to operate in the higher band.

A bit of history

The International Telecommunication Union (ITU) originally created the Industrial, Scientific, and Medical (ISM) bands in 1947. The ITU designated twelve different ISM bands, but the two of interest to us in this article are those at 2.4 to 2.5 GHz and 5.7 to 5.8 GHz. Devices in these bands were to be unlicensed, but subject to regulation by regional telecom authorities – in the case of the U.S. by the FCC.¹ Originally, these bands were used primarily by microwave ovens, industrial heaters, and welders. Two-way communications were rare.

In 1985, the FCC opened up these frequencies to unlicensed spread-spectrum devices for wireless LANs and mobile communications. There was a lot of interest, but the technologies were not there yet. To add additional incentives in 1997, the FCC added additional bands in the 5 GHz range known as the Unlicensed National Information Infrastructure (see Table 1). Now the race started in earnest.


In 1997, IEEE 802.11 – the original Wi-Fi standard – was introduced proposing the use of Direct Sequence Spread Spectrum (DSSS) and Frequency Hopping Spread Spectrum (FHSS) techniques. The Bluetooth specification was formalized in 1998. In 2003, the 802.15.4 standard defined a physical layer (PHY) for the 2.4 to 2.4835 GHz band that could accommodate up to sixteen channels using DSSS with a data rate of 250 Kbit/s. WirelessHART™, ZigBee®, and MiWi™ are all based on 802.15.4. These unlicensed devices are covered by Title 47 Part 15² of the FCC regulations.

With the advent of Wi-Fi, Bluetooth, ZigBee, and WirelessHART, use of the 2.4 GHz band took off like a rocket. Unfortunately, so too did interference, since the band was also shared with cordless phones, baby monitors, wireless computer networks, and myriad of other devices. Newer collision avoidance schemes proliferated. In 1999, Wi-Fi dropped FHSS for OFDM (802.11a), but kept DSSS (802.11b). Bluetooth upgraded to adaptive FHSS. ZigBee stuck with DSSS with CSMA/CA for collision avoidance, though the data rate could drop markedly in the presence of multiple interferers.

5 GHz to the rescue

All of the protocols previously discussed, with the exception of 801.11a/n and HyperLAN in Europe, work exclusively on the 2.4 GHz ISM band. As the lower 2.4 GHz ISM band got crowded, the 5 GHz band started to draw attention. The higher band has some key advantages as well as some disadvantages (see Table 2): As with everything else there is trade-offs:


Range and power are, of course, directly related, though the indoor path loss problem is apparently overrated. According to a University of Southern California study³, “While it is true that Friis’ formula dictates that propagation losses will be 20 Log10 (5.25/2.4 )≅6.8 dB higher at 5 GHz in the case of isotropic transmit and receive antennas, propagation losses through most building and home-construction materials are almost the same for both frequency regimes.”

So all things being equal, in order to maintain the same signal strength over a given path when switching from 2.4 GHz to 5 GHz, you would need to increase the output of your PA by 4.5 times, which is not allowed by FCC rules (see Table 1). Using high-gain antennas will not help much, since there is a power penalty that kicks in for antennas with gains greater than 6 dBi. When you move from 2.4 GHz to 5 GHz devices, you are going to take a hit on range. Once you adjust for that, you still have the major 5 GHz advantages of greater throughput and less interference.

While the 5 GHz band is far less crowded than 2.4 GHz, it is hardly undiscovered. In fact, unlicensed devices are secondary users of this part of the spectrum, and under the FCC’s Part 15² rules they must share it with numerous satellite, aeronautical, marine, and land-based navigation and tracking services, all of which have priority access (see Figure 1). Under the rules, unlicensed devices must not interfere with primary users and in turn must accept any interference that other users cause to their devices. In practice, this currently is not much of a problem since the primary users generally use single-carrier schemes and unlicensed users use OFDM. That will change over time as the band becomes more popular. 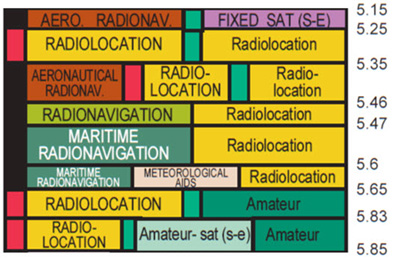 An 802.11n router can increase performance by taking up a 40 MHz chunk of the band instead of the standard 20 MHz channel. Combining adjacent channels is called channel bonding. Channel bonding is possible on 2.4 GHz, but ill-advised because of the impossibility of bonding adjacent channels; 802.11n allows channel bonding on this band but doing so can take up as much as 82 percent of the band – not exactly a “good neighbor” policy. On the other hand, channel bonding is highly advisable at 5 GHz, and can double the data rate you can hope to get at 2.4 GHz. Overall the 5 GHz band is a much better choice for ensuring the top speed in your wireless network or device.

Front-end modules (FEMs) for the 2.4 GHz band have become something of a commodity and are widely available – neither of which is true for designs that operate at 5 GHz. Fortunately Hotenda has pretty much everything you will need to implement such a design. 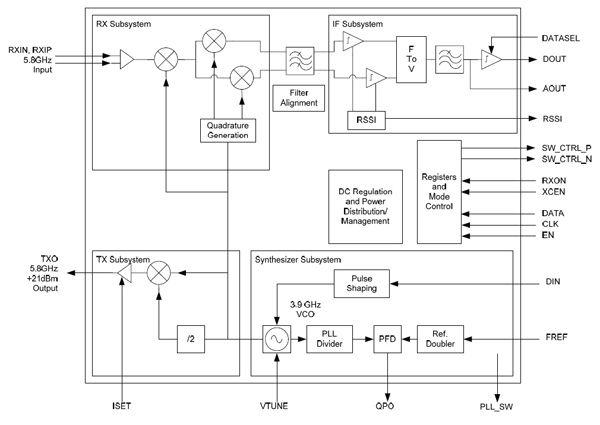 Moving in from the antenna, RFMD’s ML5805 Variable Data Rate FSK Transceiver (see Figure 4) is a single-chip wireless digital transceiver for the 5.725 to 5.850 GHz ISM band. The ML5805 contains a dual-conversion, low-IF receiver with on-chip channel selectivity and IF filtering. The receiver has an input sensitivity of -97 dBm for < 0.1 percent BER at 1.1220 Mbps. The PA can deliver 21 dBm at 5.8 GHz into a matched 50 Ω load. The ML5805 lacks only a T/R switch – for which it has a control pin – to be a complete 5 GHz transceiver.

Skyworks Solutions’ SE5008L 5 GHz WLAN Switch/LNA Front End is an integrated front-end module that provides 14 dB of gain with a 2.0 dB noise figure from 4.9 to 5.85 GHz. The chip integrates an integrated SPDT switch and LNA with bypass mode. It does not include a PA, but can handle one up to 30 dBm into a 50 Ω load, for example, Skyworks’ SE2567L 5 GHz power amplifier with 30 dB gain and 19 dBm power output from 4.9 to 5.9 GHz. Skyworks makes the SE5008L-EK1 evaluation kit to help you check out the operation of its FEM and start designing with it.

At this point you are now ready to down convert to IF, and Hotenda has literally hundreds of mixers and IF amplifiers from which to choose to get you down to baseband. On the way back toward the PA, it has an equal number of modulators.

The 5.4 GHz ISM band is a good alternative to 2.4 GHz if you are willing to trade range for speed and lack of interference. Where there is not yet an 802.15.4 PHY that operates on this band, 802.11n can take full advantage of the extra bandwidth that this band makes available.