With the rapid progress in power electronics and semiconductors, each power electronics application has required dedicated and specialized semiconductor switching devices from a cost and performance standpoint. The field-stop (FS) IGBT provides lower-saturation voltage drop and lower switching losses versus the conventional non-punch-through (NPT) IGBT. In addition, a relatively recent improvement, the integration of an anti-parallel diode on the IGBT die through use of the shorted-anode (SA) technology, makes the FS IGBT well suited for soft-switching power-conversion applications.

Although a NPT IGBT improves switching speed by reducing the minority carrier injection quantity and by raising the recombination rate during the turn-off transition, it is undesirable for certain high-power applications due to its higher VCE(sat) because its n- substrate has to be lightly doped, and consequently, the thicker substrate is needed to sustain the electric field during the off state as shown in Figure 1(a). The thickness of the n- substrate is the major factor of the saturation voltage drop in IGBTs.

The “n” doped field-stop layer between “n-” drift layer and “p+” collector of a conventional NPT IGBT, as shown in Figure 1(b), drastically improves the performance of IGBT. This is the field-stop IGBT concept. In the FS IGBT, the electric field rapidly decreases within the field-stop layer while gradually decreasing within “n-” drift layer. Therefore, the thickness of the “n-” drift layer and the saturation voltage drop can be significantly improved. The trench-gate structure also improves the saturation voltage drop. The field-stop layer of a FS IGBT accelerates the majority carrier recombination during the turn-off instance, and thereby, its tail current is much smaller than NPT or PT IGBTs. This leads to lower switching losses and lower turn-off energy, Eoff. 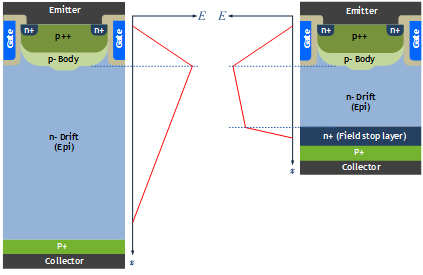 Meanwhile, a new idea emerged: a shorted-anode IGBT (SA IGBT) that allows embedding of the body diode into an IGBT in the same fashion as a MOSFET. Figure 2 shows the basic structure of a field-stop trench shorted-anode (FS T SA) IGBT concept where the “n+” collector is adjacent to the field-stop layer and acts as a cathode of a PN diode, while the “p+” collector layer acts as the general collector of the FS T IGBT. 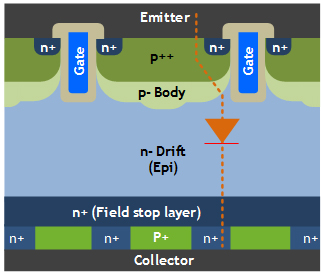 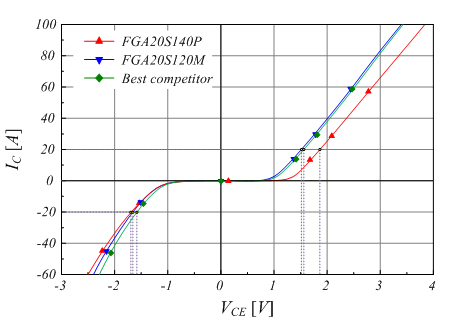 Figure 3 shows the typical output characteristic comparison of the new shorted-anode device (FGA20S140P), the previous generation device (FGA20S120M), and the best competitor. At the rated current, 20 A; the saturation voltage, VCE(sat) of FGA20S140P is 1.9 V, while that of FGA20S120M is 1.55 V and that of the best competitor is 1.6 V, respectively. Figure 4 shows the reverse-recovery performance comparison results. The reverse-recovery performance of SA IGBT is slightly inferior to the ultra-fast recovery diode (UFRD) co-packaged with IGBT. Fortunately, higher VCE(sat) is not detrimental in induction heating (IH) applications. 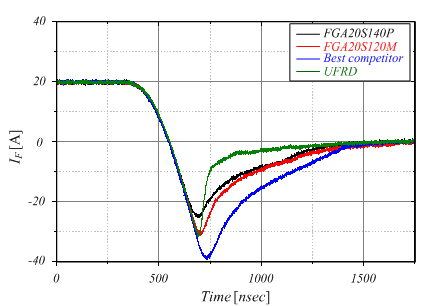 With an advanced field-stop shorted-anode technology optimized for IH, the recent Fairchild second-generation FS T SA IGBT technology has greatly improved not only breakdown voltage but also switching performance compared to the previous version; even though, VCE(sat) is a little bit higher. The turn-off characteristic comparison using a soft-switching test jig is illustrated in Figure 5. The turn-off energy of the FS T SA IGBT is 573 μJ, while that of the previous generation FGA20S120M is 945 μJ and the best competitor is 651 µJ, respectively. Consequently, the new generation FS T SA IGBT device has at least a 12% lower turn-off energy than other devices in this particular soft-switching test that simulates an IH application. 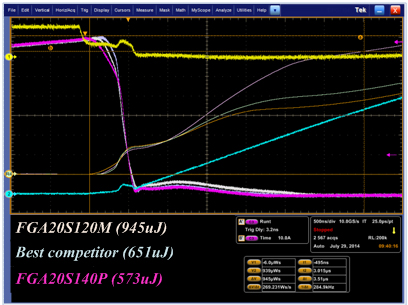 The key parameters of each device are compared in Table 1.

The latest-generation shorted-anode IGBT that embeds the intrinsic body diode in a fashion similar to that of a MOSFET was introduced. This device has smaller Eoff characteristics than the best competitor, as well as the previous Fairchild Semiconductor version. In summary, the new device can make the FS IGBT more useful for designs of soft-switching applications that are not requiring a high-performance anti-parallel diode.