STMicroelectronics - Intelligent Power Switches (IPS) are discussed including their function, features, and safeguards.

In an Intelligent Power Switch, a MOSFET is positioned between the VCC and the OUT pins. This MOSFET is controlled by the input pin (which is connected to the microcontroller). These devices have no contacts, so when compared to mechanical relays, there is no wear-out. That, coupled with the diagnostic outputs allows for increased reliability. Intelligent Power Switches can be powered directly from 24 V, but the operating voltage of Intelligent Power Switches, depending on the part, starts at 5.5 V and ranges as high as 55 V. The ambient temperature range, in general, is 40°C up to 125°C, which allows these devices to be used in very harsh environments. They also have fast demagnetization due to a chopping technique, and can detect an open load.

ST offers many different products including single-channel, quad-channel, and eight-channel devices. High-side switches are the majority of the product range, but low-side switches like the TDE1737 and the two TDE170x devices can be configured as either high- or low-side switches.

Let’s review some key features of IPS devices. Because these devices were developed to address specific customer’s requirements, not all devices have every feature. Also, some features can only be implemented in a certain technology, as already discussed above.

One important feature present on all VNxxxx devices, and some of the L637x part numbers, is Output Current Limiting. During an overcurrent or short circuit event, the output current is limited to an internally set value. The VNI2140J is a new, increasingly popular two channel IPS device with this feature.

Another feature is Overtemperature Protection. When the junction temperature exceeds an internally set value, the IPS device switches off the relevant channel until it reaches a reset temperature point. This function automatically restarts the channel and allows the device to function with minimum interruption.

It is also possible to parallel the outputs to increase the maximum current as demonstrated in the diagram. This will be done in order to increase the current in the load and to decrease by a factor of two ,the total Rds(on) and hence, decrease the power dissipation for the same amount of current. So, for a given current, we do not just take just the current on a given channel, but multiply the current by channel by the number of channels to see if we can meet the requirement. Similarly, for a target Rds(on), we divide the Rds(on) of a channel by the number of channels.

ST IPS devices can drive any kind of load, but obviously have some limits. The value of the capacitive load is limited by over temperature in the junction. To drive a capacitive load, the following condition must be met, characterized by the formula below:

As cable has a capacitance of 0.3 μF per km, there is a problem of cable capacitance with long control cables, which often occurs in large-scale installations such as crane systems in container terminals.

Thanks to a fast demagnetization, using a chopping technique, ST can quickly dissipate the inrush of excess energy when an IPS connected to an inductive load is turned off without damaging the device.

Another feature, offered in the VNI2140J device for example, is the open load detection in the OFF-state function. 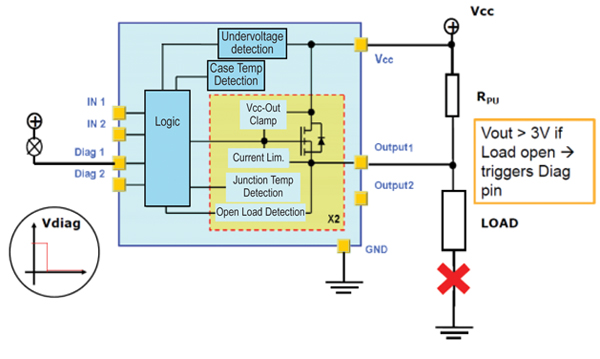 Figure 1: The VNI2140J open load detection in the OFF-state.

If an open load occurs on one of the two outputs, the condition is signaled through the diagnostic pin. However, in order to detect the open load fault, a pull-up resistor must be connected between VCC line and the output pin.

In OFF state (when the VIN pin is Low and the transistor is OFF), an open load can be detected. For that, a resistor must be connected between the VCC and the output pin.

An open load detection in the ON-State can be designed only with a Multipower BCD. In that case, the current value is monitored and not a voltage value. 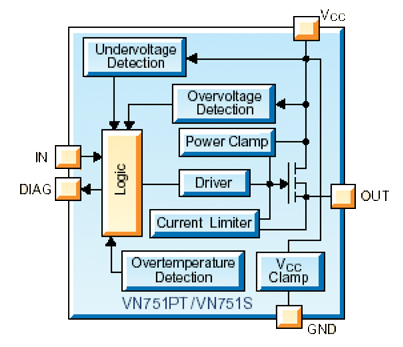 The active VCC pin clamp protects the device against low energy spikes. In addition, the active current limiting, combined with thermal shutdown and automatic restart, protects the device against overload. The device also automatically turns off in case of ground pin disconnection. It is especially suitable for industrial applications and conforms to the IEC61131-2, the programmable controllers’ international standard.

The L6370 is manufactured with Multipower BCD technology and has features that the VIPower technology products do not have, like Programmable current limit, Open ground in ON state and Programmable ON delay to drive a capacitive load.

Figure 4: The L6370 has additional features that the VIPower technology products do not.

The VNI2140 is a new generation, two-channel IPS manufactured with the VIPower technology. By providing an integrated solution for two output channels, the VNI2140J also simplifies design, enhances reliability, and saves PC board-space in equipment such as Programmable Logic Controllers (PLCs), peripheral I/O, industrial process controls, robotic systems, vending machines, alarm and security systems, and textile machines. The VNI2140J has a space-saving 6 mm x 5 mm footprint and integrates all the necessary logic, driver circuitry, power stage, protection, and diagnostic functions. The chip’s inputs are 3.3 V TTL/CMOS compatible; its outputs are connected in the high-side configuration; and two independent resistive, inductive or capacitive loads can be driven.

The chip’s built-in, shorted-load protection with independent active current limitation for each channel prevents load faults from pulling down the system power supply. If either channel becomes overloaded, that channel is turned off independently while the other continues operating normally, and it is restarted automatically when the junction temperature has returned to normal. If both channels are overloaded, they are restarted non-simultaneously to avoid drawing high peak currents from the power supply. Other features helping designers to deliver rugged, highly featured solutions include protection against loss of ground, as well as diagnostics such as open-load detection in the OFF state. 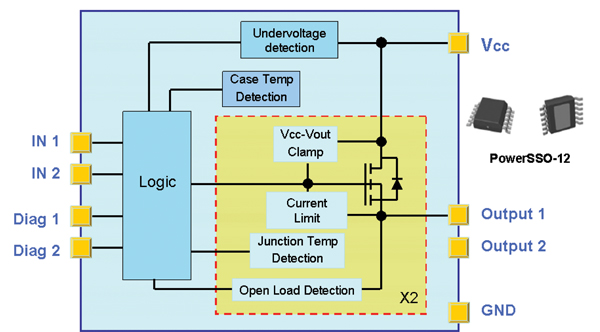 
The technical features of the VNI2140J include: The new VNI4140K is a four-channel, high-side driver with diagnostics for each channel. It also offers a double temperature protection feature which monitors the junction and case temperatures. The feature was added to protect not only the device, but also the printed circuit board (PCB).

The VNI4140K has an Output current of 0.7 A while the VNI4140K-32 has high-current capability. These devices are produced using the latest generation of ST's VIPower™ technology to achieve a 50 percent saving in Rds(on) compared to earlier devices with the same die size. Power consumption is cut by 40% compared to earlier generation VIPower devices. Additionally, optimizing the trade-off between Rds(on) and die size allows the VNI4140K to be produced in a compact PowerSSO24 package, saving space in the application compared to competitive four-channel devices. 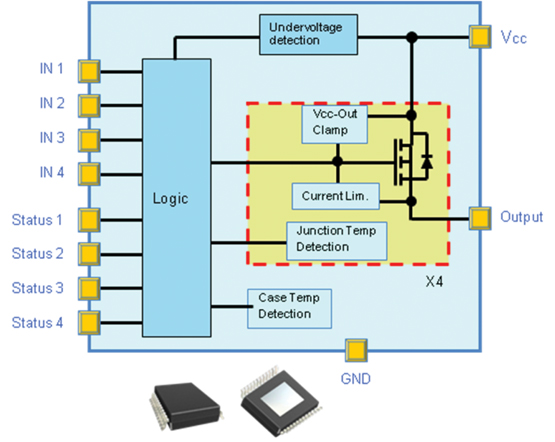 The VNI4140K provides short-circuit and overcurrent protection, undervoltage shut-down, fast demagnetization for safe operation with large inductive loads, and protection against loss of ground. Diagnostic outputs are open drain to enable wired-OR configuration with other devices, and the logic inputs are 3.3 V CMOS/TTL compatible. The switch conforms fully to the IEC 61131-2 standard for programmable logic devices.

The VNI8200XP is a new device being developed for the octal-channel, high-side switch family, slated to offer engineers an SPI interface. Currently, the VN808 family has a parallel interface, and will also have many additional features including an LED matrix driver for diagnostic outputs and an integrated DC/DC converter. 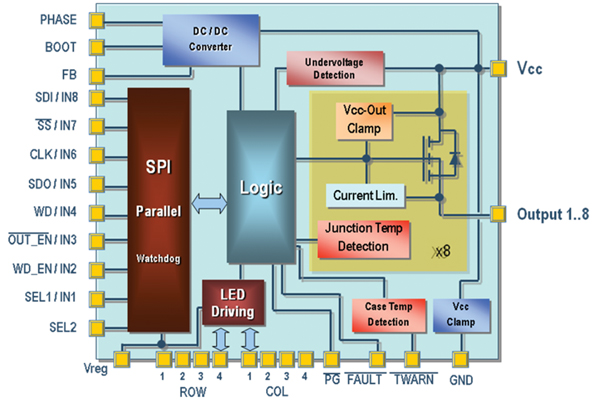