Intelligence Comes to the Commutation Encoder

Encoder users traditionally have been reluctant to change—with good reason. Motor control on the factory floor or in an industrial installation is not the place for innovations that make performance and reliability claims but lack a track record and substantive history to back them up. Although optical and magnetic encoders are long established, and employ what may seem like "more-tangible" physical concepts, the capacitive encoder also uses fully-tested principles, as proven through many successful years in the field.  This alternate approach to motion sensing, being digitally based, opens up a range of benefits and delivers a new level of intelligence for designers utilizing rotary commutation encoders.

Rotary encoders are critical to nearly all motion-control applications, and the need for them is expanding further due to the increased use of brushless DC (BLDC) motors, which brings benefits in control, precision, and efficiency. The encoder's task is simple, in principle: to indicate the position of the motor shaft to the system controller (Figure 1). Using this information, the controller can accurately and efficiency commutate the motor windings as well as determine speed, direction and acceleration – parameters that a motion-control loop needs to maintain desired motor performance. 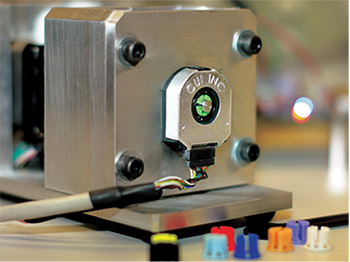 Encoders can be based on a variety of technologies, all of which provide the standard digital outputs of A and B quadrature signals, plus an index output in some models (Figure 2a). Commutation encoders (described fully below) also provide U, V and W commutation-phase channel outputs (Figure 2b).

Figure 2a: Standard A and B quadrature signals plus an index signal, shown here for an optical encoder.

Figure 2b: The U, V and W waveforms produced by a commutation encoder.

The three best-known encoder approaches use optical, magnetic, or capacitive techniques. In brief, the optical approach uses a slotted disk, with an LED on one side and phototransistors on the opposite side. As the disk rotates, the light path is interrupted, and the resultant pulses indicate shaft rotation and direction. Although low cost and effective, the reliability of an optical encoder is degraded by two factors: contaminants such as dirt, dust, and oil can interfere with the light path, and the LEDs have a limited lifetime, typically losing half their brightness in a few years and eventually burning out.

The magnetic encoder's construction is similar to the optical encoder, except that it uses a magnetic field rather than beam of light. In place of the slotted optical wheel, it has a magnetized disk which spins over an array of magneto-resistive sensors. Any rotation of the wheel produces a response in these sensors, which goes to a signal-conditioning front-end circuit to determine shaft position. While it offers a high level of durability, the magnetic encoder is not as accurate and is susceptible to magnetic interference produced by electric motors.

A third approach, capacitive encoding, offers all the benefits of optical and magnetic encoder designs, but without their weaknesses. This technique uses the same principle as the well-established, low-cost yet precise digital vernier caliper. It has two patterns of bars or lines, with one set on the fixed element and the other set on the moving element, together forming a variable capacitor configured as a transmitter/receiver pairing (Figure 3). As the encoder rotates, an integral ASIC counts these line changes and also interpolates to find the position of the shaft and direction of rotation to create the standard quadrature outputs, and also the commutation outputs that other encoders provide to control brushless DC (BLDC) motors.

The beauty of this capacitive technology is that there is nothing to wear out and it is immune to contaminants such as dust, dirt, and oil, which are common in industrial environments, making it inherently more reliable than optical devices. Capacitive encoders also offer performance advantages derived from their digital control features – this includes the ability to adjust the encoder’s resolution (the pulses per revolution count) without the need to change to a higher, or lower, resolution encoder. 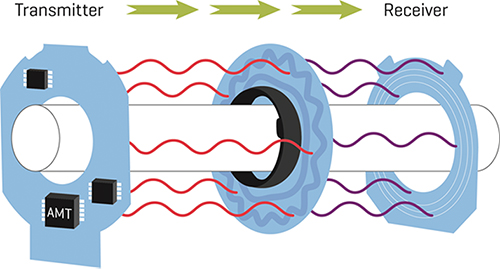 Figure 3: A capacitive encoder counts the received pulses resulting from the modulation of the transmitted signal by the rotor that is attached to the motor shaft.

The Best of All Worlds

CUI’s new AMT31 series is an example of a state-of-the-art capacitive encoder, providing A and B quadrature signals, an index signal, as well as U, V, and W commutation-phase signals. Twenty selectable incremental resolutions between 48 to 4096 pulses per revolution (PPR) and seven motor pole-pairs from 2 to 20 are available. The AMT31 series also features a locking hub for ease of installation, operates from a 5 V rail and requires just 16 mA of supply current.

However, the benefits of the capacitive encoder go far beyond superior performance, flexibility, and short- and long-term reliability. Unlike optical and magnetic encoders, its digital-output side takes system design into the 21st century, offering many unique system benefits in all phases of encoder use, from product development, to installation, and even maintenance.

Why is this so? The output of the optical or magnetic encoder is functional but "dumb", and offers users no flexibility, insight, or operational advantages. In contrast, the capacitive encoder is digitally based and uses a built-in ASIC and microcontroller to provide additional features and enhanced performance. This smart output changes the user and performance scenario in many ways, while still being 100% compatible with standard encoder outputs.

Substantial, beneficial change is in place

Let's look in more detail at the enhancements made possible by the ASIC and microcontroller which are part of a capacitive encoder such as the CUI AMT31 series:

In contrast, zeroing to mechanically align the commutation signals with the motor windings using an optical or magnetic encoder is a multistep, complex, and often frustrating process. It requires locking the rotor, physical alignment, and then back-driving the motor while using an oscilloscope to observe the back EMF and encoder waveforms for proper zero cross alignment. This is often an iterative process with the steps usually needing to be repeated for fine-tuning and verification, so the entire cycle can take 15 to 20 minutes.

The intelligence built into the AMT series also allows for onboard diagnostics for quicker field-failure analysis, an industry first.  The encoder can be queried to indicate if it is operating properly or if there is some sort of failure due to mechanical misalignment on the shaft or other issues. Therefore, the designer can quickly determine if the encoder is at fault and if not, look for the source of the problem elsewhere, thus ruling out the encoder itself as possible problem. Furthermore, engineers can use this feature for preventative measures - for example, executing an “encoder good” test sequence before running the application.  These capabilities, not available in optical or mechanical encoders, allow designers to keep downtime to a minimum while anticipating issues that might occur with units in the field.

The Windows PC-based AMT Viewpoint™ software for CUI capacitive encoders speeds development, and also turns time-consuming mundane tasks, such as identifying model number and version, into simple operations. It requires just a USB cable to interface to the encoder, and implements a simple serial-data format.

The GUI allows the user to tailor and customize the encoder to the application’s needs (Figure 4). 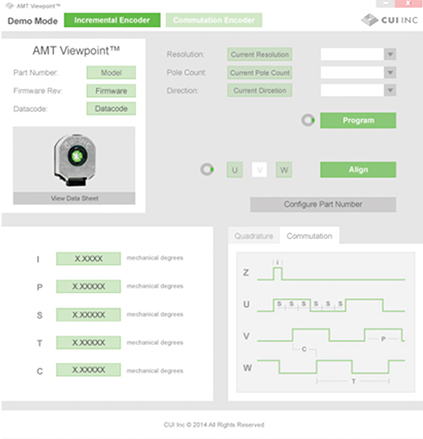 A settings screen in the GUI lets users see key encoder waveforms and timing, with automatic adjustments as the encoder options are changed. Programming an encoder through the GUI takes just a few keystrokes and about 30 seconds for the cycle to complete. Most dramatic, the aligning and zeroing of an encoder for either A, B, index or commutation mode takes only seconds, a sharp contrast to completing this task with a non-programmable encoder.

In demo mode, users can go through the GUI and also perform encoder-related operations as if an actual encoder is attached, a convenient way to become familiar with the encoders and tools prior to any purchase or hands-on use. Finally, the GUI also supports creating orderable part numbers for specific encoder versions, which include options in output format, sleeve (bore) adapter, and mounting base, among others.

The benefits of encoders based on capacitive technology offer much more than just improved performance and reliability. A device like CUI’s AMT31, with its built-in ASIC/microcontroller, provides intelligent functionality supporting programmable set-up and installation features, enabling operating insight and simplifying inventory management. When these features are coupled with the PC-based GUI, it can provide an easy-to-use yet sophisticated capability, which greatly simplifies all aspects of encoder use from prototype design-in, evaluation, and debug through installation and configuration, to diagnostics and inventory minimization. Furthermore, all of this is available at comparable cost to other encoders, maintaining compatibility with standard outputs types and formats, while also achieving lower power consumption. The AMT31 with its easy-to-fit adapters for different shaft sizes (Figure 5), represents the logical next step in leveraging the power of an intelligent interface to provide wide-ranging benefits that are not available with other encoder technologies.