Designers and engineers have overcome the deployment of the 400 VDC power distribution topology within data centers and telecom facilities.

Over the years, we have seen a big surge in the use of data centers to meet the needs of spiraling Internet traffic, expanding mobile voice/video/data communications, and rapidly developing Cloud computing services. As a result, power consumption has become a major factor in the economics of these centers. Added to the mix is tremendous pressure to cut power losses and save energy, which is coming from regulatory agencies like the Environmental Protection Agency (EPA) and industry associations such as Green Grid. In response, engineers have taken several approaches to improve the overall efficiency of power systems used in data centers and telecom facilities.

One of these strategies involves the use of a higher-voltage DC (HVDC) bus. The use of 400 V (max)DC power distribution (also referred to as a 380 VDC bus), has been gaining support in the industry for several reasons. One major attraction is improvement in the overall energy efficiency of the power chain. From a systems standpoint, researchers have shown that about ten percent higher energy efficiency can be achieved by using high-voltage DC-power distribution as compared to the traditional AC-to-48 VDC conversion, according to a Vicor white paper “High-voltage DC distribution is key to increased system efficiency and renewable-energy opportunities”.1

This white paper points out that there are several other factors driving power-electronics designers toward the new 400 VDC topology. For example, unlike AC, DC does not require source synchronization and can draw power from renewable sources like solar and wind.  In addition, it does not need phase balancing and harmonics is not an issue. Moreover, most back-up energy sources, such as batteries and flywheels, are inherently DC. Finally, by minimizing power-conversion stages, along with building wiring, copper, and connectors, HVDC offers a lower total cost of ownership (TCO).

Earlier, the adoption of 400 VDC distribution bus had been a challenge because of the unavailability of UL-certified, production-ready high-voltage power supplies. At the INTELEC conference, key manufacturers like Anderson Power Products, Emerson Network Power, now called Artesyn Embedded Technologies, IBM, Universal Electric Corp. and Vicor demonstrated the feasibility of a 400 VDC ecosystem. These manufacturers, along with other component suppliers, displayed a fully functional 400 VDC power-distribution solution, highlighting the viability of the technology and the availability of its building blocks for the solution.

Details of the HVDC solution

As per the description in the Vicor article “Display Demonstrates Increasing Viability of 400-V DC for Telecom and Datacenter Applications”,2 the rack-mounted power supply products used in the demonstration indicated how 400 VDC could power different types of loads representing different power levels. For instance, an Emerson rectifier generated 380 VDC, which was used to power loads such as a high-voltage lighting unit, a Vicor bus converter, and a small Intel industrial microserver. The 380 VDC also fed a second Vicor bus converter that in turn fed a telecom-level router from Juniper Networks (Figure 1). All the power components starting from AC rectifier to point-of-load (POL) DC/DC converters, including power connectors and protection devices, were housed in two racks. The discussion suggested that the rack-mounted equipment was used for the demo to resemble an equipment configuration typically found in telecom and data-center facilities. 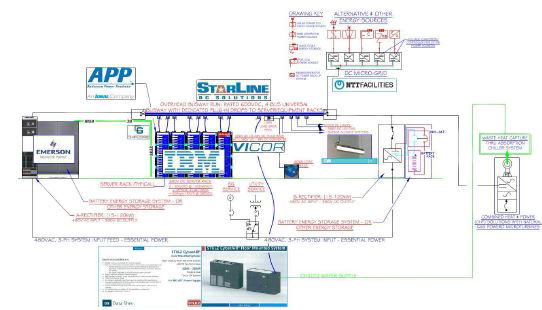 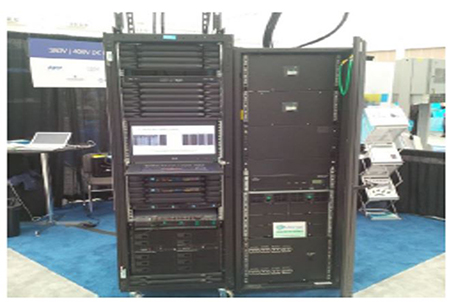 Figure 2: All the power components used to demonstrate a functional 400 VDC power system were housed in two racks.

The Vicor bus converter used as part of the solution was the BCM bus converter housed in the maker’s proprietary ChiP package (Figure 3), available as BCM400P500T1K8A30.  It operates from a 400 (or 380 V) VDC input to deliver an isolated, unregulated 48 VDC output with up to 1750 W continuous-output power. It can be paralleled for higher power output. To achieve ninety-eight percent peak efficiency with 2750 W/in3 power density, the BCM DC/DC converter uses the manufacturer’s proprietary sine-amplitude converter (SAC) topology with zero-voltage/zero-current switching (ZVS/ZCS). In addition, it leverages the thermal and density benefits of Vicor’s ChiP packaging technology. 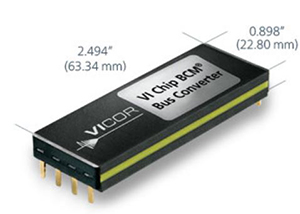 As a result, the BCM-bus power-converter module offers flexible thermal-management options with very-low top- and bottom-side-thermal impedances. According to Vicor’s data sheet, the BCM power module in ChiP package offers full power operation at 95°C case temperature with no de-rating when dual-sided cooling is used. Furthermore, per Vicor’s explanation, the architecture maintains high efficiency across wide load variations and allows seamless, dynamic use of multiple sources, such as rectified DC line, battery and renewables, as they become available in the HVDC ecosystem.

To further step-down the 48 VDC bus to lower point-of-load (POL) voltages to drive IC loads such as microprocessors, FPGAs, and ASICs, Vicor has prepared an isolated buck-converter family designated PI31xx to convert 48 V input down to 3.3 V or higher. For example, PI3101-00-HVIZ can deliver 3.3 VDC output at up to 18 A. Housed in a PSiP package, these modules integrate controller, power switches, planar magnetics, and support components within a single high-density surface-mount package.

In conclusion, the joint INTELEC 2014 demonstration of a fully functional HVDC power-distribution solution shows that the obstacles to the deployment of a 400 VDC power distribution topology in data centers and telecom facilities (including buildings and industrial complexes), has been overcome. Deployment now is well supported by multiple power-component suppliers.