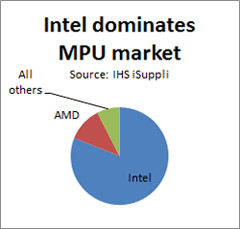 Intel has 81 percent market share in the global microprocessor market and continues to lead AMD.Intel, the world's largest chipmaker, maintained its dominance in microprocessors in 2010, growing its market share 0.4 percent to 81 percent, according to researcher IHS iSuppli. AMD's share of the global processor market fell 0.8 points to 11.4 percent.

The processor market, which grew 25 percent to $40 billion in 2010, remained "very much the same two-horse race it has been for more than 20 years, with Intel firmly in the lead and AMD a distant second," said Matthew Wilkins, principal analyst, compute platforms, for IHS iSuppli, based in El Segundo, Calif.

An opportunity for both Intel and AMD in 2011 is provided in the form of graphics enabled microprocessors (GEMs) which combine a central processing unit (CPU) with a graphics processing unit.

In 2010, GEMs represented more than one-third of total microprocessor shipments for notebook and desktop PCs alike in 2010, and demand for GEMS will grow in 2011 and beyond.

Use of GEMs in notebooks in 2011 will increase by 11 percentage points from 39 percent in 2010. Worldwide shipments of notebooks are expected to total 230 million in 2011, and 115 million notebooks will be equipped with GEMs by the end of the year, reported IHS iSuppli.

GEM penetration with desktops this year will increase from 36 percent in 2010 to 45 percent. By 2014, 83 percent of all notebook PCs and 76 percent of desktop PCs worldwide will ship with GEMs.