Manufacturers are using many techniques to produce thinner LED backlighting modules, accommodating requirements such as high brightness and color fidelity.


LED modules are becoming the integrated circuits of the solid-state lighting industry. In the same way that microcontrollers evolved, incorporating a range of commonly used peripherals, LEDs are increasingly being sold in module format for virtually all applications. The advantages, again, paralleling the IC market, include faster and easier design, lower total cost through reduced component count and smaller form factor. In lighting applications, superior energy efficiency and luminaire performance can also be achieved in many cases.

Interestingly, in the solid-state lighting market, miniaturization is not always the overarching benefit, but it is certainly a primary factor in display backlighting applications, and the fast growing automotive LCDs sector is a particularly demanding subset. The number of screens inside new cars is increasing, with applications including GPS, dashboard, information clusters and rear-seat entertainment.

This article will outline a number of techniques that LED manufacturers are using to produce thinner backlighting modules, accommodating requirements such as high brightness and color fidelity. Design choices include the use of white or RGB LED modules, direct or indirect backlighting approaches, and the use of reflector boxes or lightguides. Reference will be made to OSRAM Opto Semiconductors’ PowerTopLED and MultiLED LED module ranges.

Further, while the light source and its construction are important, overall size and efficiency of the solution will be much dependent on the driver electronics and power management solutions implemented, particularly for functions such as dimming. Highly integrated LED drivers for backlighting are now available from a number of sources. Two designed specifically for the strict requirements of the automotive market will be highlighted: The A8513 from Allegro Microsystems and the LT3518 from Linear Technology.

LED modules vary in composition, ranging from single or multiple bare die packaged and ready to solder, through packaged LEDs mounted on a tiny PCB or substrate, such as COB (chip on board) LEDs, up to sophisticated devices incorporating secondary optics and thermal management, housed in a small enclosure. Modules that integrate the driver electronics are largely more specifically defined as a light engine.

With the increasing efficiency of LEDs, higher lumen output and integrated package design, LED backlighting for LCDs has become the norm. Once limited to relatively small displays, the technology can now be applied to larger display panels, including large format TV screens. Increased display size and information density requires high performance, particularly in terms of color gamut and color consistency – and this is precisely where LED technology outperforms CCFL sources that have traditionally been used for large display backlighting.

In automotive applications, resistance to mechanical stress and vibration is additionally important. Again, LED technology is proving superior. Robustness combined with long life, simpler control circuitry operating at low voltage levels and short switching time, makes LEDs a compelling choice for in-car displays and infotainment systems. Further information on the advantages and requirements of LED backlighting in automotive displays can be found in an earlier article.²

OSRAM suggests that for displays with a monochromatic backlight requirement, either single color, multicolor or white LEDs are equally fit for the purpose. However, for backlighting multicolor displays, designers should be aware of the advantages and disadvantages of each type. Single color LEDs are less than ideal, as they require additional space for effective color mixing. In both multicolor and white LED modules, the color mixing takes place within the package, facilitating a more compact design.

The advantage of white LEDs is the availability of a wide range of packaging styles and power levels, and they tend to be relatively simple to drive at low voltage levels. White devices such as those in OSRAM’s Power TopLED series are based on the traditional method of luminescence conversion. Light from a blue diode is converted to yellow light by means of a phosphor layer. The precise color temperature of the resulting white light is determined by the ratio of blue to yellow light produced, itself determined by the thickness and composition of the phosphor layer(s). OSRAM recommends its Power TopLED series of LEDs for automotive applications such as dashboard displays, map lighting and rear seat entertainment displays.

The recommendation for color display backlighting, however, particularly if a large color gamut is required, is multicolor LEDs. Incorporating multiple, different color (normally RGB) die into a single module, provides greater design flexibility, as well as a compact package that can be constructed to meet the stringent requirements of the automotive market (Figure 3). When all three chips are driven simultaneously with the appropriate RGB intensities (a ratio of 30:60:10 is typical), a white light is produced. 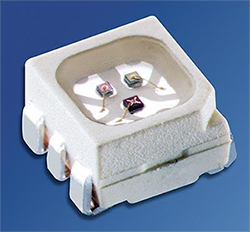 Figure 3: One of OSRAM’s 6-lead RGB LED modules in the MultiLED range.

For high brightness, space-constrained applications (>500 cd/m²) of medium size, direct backlighting tends to be the preferred scheme. LEDs are spaced in a regular pattern, with a reflector box construction to provide a homogenous illumination across the display panel. The depth of the reflector box is dependent on the LED spacing and the emission angle of the diodes. Direct backlighting can be scaled for various display sizes and brightness levels. 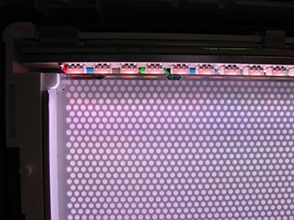 For large size displays that do not necessarily require high brightness, an indirect backlighting construction can work well. Light is deflected or reflected on to the back surface of the panel, normally using a lightguide. Microlenses built into the lightguide help achieve a uniform distribution of light. Various configurations of lightguide and angled deflector surfaces are possible. Both top looking and side looking LEDs may be used, depending on the design.

A 17 inch LCD screen, for example, could typically be backlit using two rows of fifty RGB LED modules, side mounted with direct contact to the upper and lower sides of a lightguide. A typical example in OSRAM’s MultiLED range, is the LTRBGFSF-ABCB, a six-leaded RGB rectangular module with 120° viewing angle and a diffused lens. Optical efficiency is quoted at 45 lm/W typical, with individual millicandela ratings of 700 mcd (red), 1350 mcd (green) and 160 mcd (blue). As LEDs become brighter, fewer devices will be needed in future designs.

OSRAM’s MultiLEDs are designed and packaged for use in automotive interior applications, including driver dashboard displays.

Automotive display backlighting applications require highly integrated LED drivers, especially as larger format LCD instrument clusters and driver information systems are becoming more pervasive. Although driving LEDs for backlighting is flexible, suiting both pulse operation and PWM dimming, for example, not all drivers are AEC-Q100 qualified and meet the appropriate automotive voltage and temperature ratings. Drivers also need to be selected to match the number of LEDs or modules per string, number of strings and LED current. LED current itself varies depending on the color combinations and mixing required.

A suitable LED driver candidate can be found in the A8513 from Allegro Microsystems, aimed specifically at automotive infotainment, instrument cluster and center stack display backlighting. Designed as a single output white LED driver, the device integrates a current mode boost converter with an internal power switch and current sink. It operates from a single power supply from 4.5 to 40 V, and features a 2 MHz boost converter switching frequency.

Importantly, the devices are available in tiny 10-pin MSOP or 16-pin TSSOP packages. Both feature an exposed thermal pad for enhanced thermal dissipation.

Another option is the LT3518 from Linear Technology, once again a highly integrated device available in a 16-pin TSSOP or a 16-lead QFN (4 x 4 mm) package. Described as a current mode DC/DC converter with an internal 2.3 A, 45 V switch, it is specifically designed to drive LEDs for display backlighting applications in automotive and avionics systems. Operating as an LED driver in boost, buck and buck-boost modes, it combines a traditional voltage loop and a unique current loop. This allows it to function as a constant current or a constant voltage source.

Programmable switching frequency allows optimization of the external components for efficiency or component size. Switching frequency can be synchronized to an external clock signal, and the LED current is externally programmable with a 100 mV sense resistor. The external PWM input provides 3000:1 ‘true color PWM’ LED dimming, a useful feature for night running in automotive displays. The ctrl pin provides a further 10:1 dimming ratio.