Integrating Gesture Control Inside the Car

The proximity sensor has become a critical component as touch screen technology has rapidly evolved to become the man-machine interface of choice for a wide range of electronic products today.


The proximity sensor has become a critical component as touch screen technology has rapidly evolved to become the man-machine interface of choice for a wide range of electronic products today. Inside today’s vehicles is no exception, as designers seek innovative, safety-conscious and differentiated ways of controlling the expanding array of instruments and features available to drivers and their passengers. The fact that proximity sensor based interfaces, as their name suggests, do not always require a physical touch, is proving particularly useful in automotive applications. This technology, which enables gesture sensing, is appealing especially to the automotive human-machine interface (HMI) design team for controlling in-car electronic devices.

In terms of HMI design, touch control, gesture recognition and reliable and accurate proximity sensing enable a more coherent electronic man-machine interface, based around a central console control panel. As a result, the reliance on mechanical control switches is reduced, with a consequential impact on cost, reliability, durability and power consumption. In addition, carmakers are finding that customers are attracted more to touch switch and slider technology than to traditional mechanical switches and rotary dials.

Importantly, proximity sensors and their associated controllers are now becoming available with support for the automotive-specific communication protocols LIN and CAN, thus making them even more attractive to automotive OEMs and more easily integrated with other in-car electronic systems. The combination of proximity sensors with the fast growing new generation of LED-based interior ambient lighting will be a focal point of 2012 mid-size models.

Automotive OEM, Federal-Mogul, for example, has developed LED lighting that can be operated with a simple wave of the hand.² The technology is claimed to enhance safety as it keeps a driver’s eyes on the road. Additional benefits include greater durability and reliability, as mechanical switches are all but replaced, and lower power operation. In this case, capacitive switching technology is used to detect the proximity of the hand as it enters a pre-set field (between 0 and 80 mm). The switch is triggered by the conductivity of iron in the blood. With capacitive proximity sensors, the device operates even with a gloved hand, unlike systems using infrared technology, for example. The lighting control system can be enhanced by programming the sensor to recognize a sliding or tapping action to dim or change the color of the lights.

Other product examples combining LEDs and proximity sensors in even mid-range vehicles are emerging from a number of carmakers. These include their use in backlights for door handles and window openers, other compartment lighting such as map or vanity lights, and central dome lighting. Light intensity can be programmed to vary according to the proximity of the conductive object. Lighting color can also be user-programmable. Other non-lighting automotive applications for proximity sensors include keyless door unlocking, waking up instruments or screens, and parking aids.

There is a range of proximity detection technologies and approaches to choose from: capacitive, inductive, resistive, infrared, ultrasonic and optical, among others. Capacitive sensing is currently finding most favor in many modern applications, particularly for its range of up to 300 mm. Proponents claim excellent reliability, simple mechanical design, low power consumption and low cost.

Typically, capacitive sensing systems comprise either a single electrode (self-capacitance) or a pair of electrodes (mutual capacitance). In operation, the system measures the change in capacitance, between the electrode and ground or the two electrodes, created due to the proximity of a conductive object (such as a human hand). This measurement is used to determine the distance of the object. Mutual capacitance technology can be used to detect multiple objects.

The use of multiple capacitive proximity sensors enables the recognition of simple spatial gestures such as hand waving; a sweep in one direction will turn the switch on, and a sweep in the other will turn it off. There are various methods employed to implement a capacitive system, including Relaxation Oscillator, Sigma Delta, Charge Transfer and Amplitude Modulation.

Atmel, for example, has developed the Charge Transfer method using both self-capacitance and mutual-capacitance sensors, technologies for which it holds various patents. For self-capacitance devices, voltage is generated on the sampling capacitor during the repetition of a specific control sequence applied over the I/O pins. Its QTouch range of self-capacitance sensors is readily available. Typical in the AT42QT series, for example, is the AT42QT1110-AZ, an 11 key device with an extended operating temperature range from -40 to 125°C. Many other models are available with a range of data interfaces and 1 to 11 key support.

Meanwhile, Atmel’s mutual capacitance range is called QMatrix. A typical part available is the 16 slider device. Again, many other variations are also available.

With a major focus on automotive applications, particularly interior lighting control (see Figure 1 below) and keyless entry, Atmel has ensured its capacitive proximity detection technology meets the stringent requirements of this industry. It sees the major challenges for designers of automotive capacitive proximity sensors as moisture resistance (water on the surface can create a greater change in capacitance than an approaching object) and rapid temperature changes. Other important features to look out for include high sensitivity, (by increasing sensitivity, a sensor can be used to detect objects in three dimensions with no line-of-sight restrictions), noise immunity and fast response time. The company offers sound advice on the effects of capacitive loading, incorporating active shielding, and sound mechanical design. Ongoing developments are likely to result in new proximity methods and algorithms to increase sensitivity, to support finger or hand detection ranges of up to 200 mm and more. 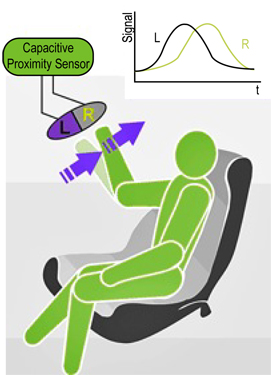 In support of its capacitive proximity sensors, Atmel offers a number of evaluation kits. For low cost, simple support of the AT42QT 16 slider device mentioned above, there is the EVK2160A evaluation kit containing the board, battery, full documentation, and samples. Intelligent control

Key to the performance of all capacitive-sensing devices is an intelligent control system that can more precisely determine the range, direction of approach or to recognize a specific gesture or multiple finger touch. Programmable sensors also enable current consumption to be reduced by varying scan speeds, depending on the application, and can help provide immunity to EMI. One solution is the microcontroller, which can be particularly effective at helping to measure the very small capacitance changes. For no-contact systems, the sensitivity must be increased, requiring even more accurate measurements. Atmel, also a major microcontroller manufacturer, offers a number of comprehensive solutions for developing sophisticated capacitive sensing applications. Kits may be based on the microcontroller with sensors added, or on the sensors with a choice of microcontrollers added.

The QT600, for example, is a complete capacitive touch development kit for buttons, sliders and wheels. Supporting both QTouch and QMatrix acquisition methods, the kit includes a USB-powered interface board, three MCU boards representing Atmel’s tinyAVR®, megaAVR® and AVR XMEGA™ families of microcontrollers, and three touch sensor boards supporting up to 64-channels, plus cables. This development platform, pictured in Figure 2 below, allows designers to experiment with Atmel touch technology and provides the easiest way to analyze and validate touch products. 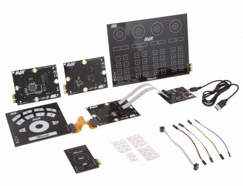 Meanwhile, Cypress Semiconductor has many years of experience developing devices for capacitive sensing applications. The company has a wide range of devices including sensors, controllers and ancillary components, starter kits and more comprehensive development systems which are virtually reference designs. In particular, the company specializes in solutions for multi-touch, all point sensing: the ability to sense the presence of multiple fingers simultaneously and the ability to recognize gestures. These all form part of the Cypress CapSense platform-based family.

For ‘proximity’ rather than ‘touch’ applications, the key is to use more sensitive sensors, according to Cypress. Sensors are scanned and the data is analyzed to identify finger range, direction of movement, and thus gestures. Systems may also drive output devices such as LEDs or control motors. This capability, together with support for CAN/LIN interfaces, makes Cypress’ CapSense proximity sensing solutions particularly applicable to automotive functions. The company is seeing a significant trend towards replacing mechanical buttons and switches with a sleek, coherent and more refined interface inside the car. Typical CapSense applications, in addition to infotainment systems, include sunroof control, key fob and keyed entry systems, door and window controls, wing mirror control and dome lighting control (Figure 3). 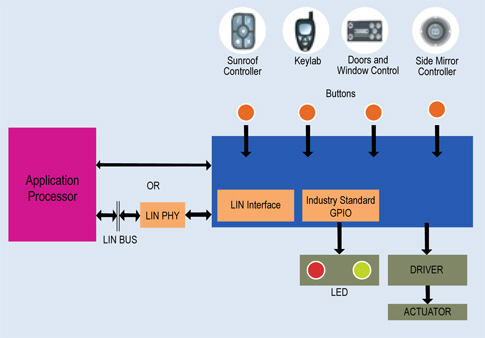 For designers new to capacitive sensing and gesture control, Cypress offers the CY3280-MBR evaluation board and starter kit. Based on the simplest device, the CY8CMBR2044, it provides up to four hardware configurable CapSense buttons with direct LED drive capability.

A range of controller board development kits is available, starting with the universal CY3280-BK1 featuring pre-defined control circuitry and plug-in hardware. The kit is supplied with controller boards for the CY8C20x34 and 21x34 PSoC devices, as well as a breadboard module and five-button slider module. However, for automotive applications, Cypress specifically recommends the CY3280-22X45 controller board, based on the CY8C22x45 8-bit microcontroller.

A range of daughter cards is available, including the CY3280-SLM with five CapSense buttons, a linear slider with ten sensors, and five LEDs. Others include the BMM 4 x 4 button matrix module, the BSM simple ten-button, ten LED module and the SRM radial slider module with four buttons and four LEDs.

For those already convinced of the CapSense opportunities, the CY8CKIT-001 PSoC Development Kit provides a common development platform for prototyping and evaluating various solutions using any of the PSoC 1, PSoC 3 or PSoC 5 architectures. To take advantage of the high-precision analog, low power, low voltage features of devices in the PSoC 3 and PSoC 5 families, the CY8CKIT-031 CapSense Expansion Board Kit is available, which can be used in conjunction with the CY3280 module board.

These extended development kits not only facilitate device evaluation, but are also designed to accelerate the development cycle by providing a hardware platform for firmware development before an application specific board is designed.

Freescale Semiconductor is a well-established supplier to automotive OEMs, and offers a range of both resistive and capacitive solutions for touch control. For example, the MPR03X is a capacitive touch sensor controller, optimized to manage two electrodes with interrupt functionality, or three electrodes with the interrupt disabled. It features high sensitivity and a specialized feature set. Importantly, the device is included in Freescale’s product longevity program, assuring supply for a minimum of 10 years after launch; an important feature for the automotive sector.

The MPR03X Evaluation Kit (pictured in Figure 4 below) is available, providing an ideal opportunity for designers to observe the basic functionality of the device. It helps the user learn how to configure the part and how to allow rapid changes to settings. Multiple devices can be configured to support up to six electrodes, and the package supports up to three touch pads. 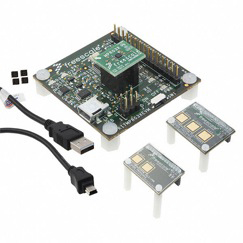 Another company well established in the specialized automotive market is Microchip Technology. The company’s popular and extensive mTouch range of touch sensor controller boards and components can be deployed in a wide range of applications. A good start point for automotive applications is the Microchip mTouch Advanced Capacitive Evaluation Kit. This enhanced package provides a flexible platform for developing a variety of capacitive touch sense applications using a choice of the ubiquitous PIC microcontrollers, including the PIC16F, PIC24F, PIC18F and PIC32 devices.

In-car systems providing driver and safety information as well as safety and comfort features are evolving fast, particularly with respect to the human-machine interface. For ease of use, style and differentiation, mechanical buttons and switches are rapidly giving way to touch sensitive control panels and direct gesture control. Additional benefits include design flexibility, longer life, robustness and lower power. Proximity sensors and their associated controllers have become critical components. Capacitive touch is currently the technology of choice.

This article has focused on capacitive touch solutions that can typically be employed in gesture control systems. Typical examples of devices and development kits from a range of manufacturers are highlighted to illustrate this emerging technology.