This article focuses on three microcontrollers that stand out as candidates for Internet of Things (IoT) applications due to the peripherals they contain.


It could be said that the Internet of Things is currently experiencing some ‘growing pains’ in terms of what it does (or does not) comprise. Although it may not be seen as driving the trend, the embedded electronics industry certainly enables it and so is unarguably in a commanding position to shape it.

Some in this industry — who understand the technology at a level most outside do not — feel that the IoT will be a subset of something even bigger: the ‘Internet of Everything’; but semantics aside it is clear that the opportunity is huge, estimates range as high as 50 billion devices by 2020 and some even predict hitting 1 trillion by 2025.

Given that many of those devices will be small nodes on larger networks, the Bill of Materials will need to be small in terms of components and total cost. For this reason it follows that every node, however big or small, will have at its heart some form of microcontroller. Given the pressure developers will be under to keep the BoM as low as possible, it seems probable that they will be selecting only those MCUs that offer the right combination of features within their price and power budget.

The range of MCUs on offer today reflects the diverse nature of the applications they enable; Freescale currently ranks as the manufacturer offering the most Cortex-M variants, with a portfolio in excess of 200 different parts. The promise the IoT holds is already driving innovation at the integration level and manufacturers are focused on developing new ranges of MCUs that will address specific IoT use-cases as they emerge, meaning developers can expect to enjoy even greater choice in the near future.

However, while there will undoubtedly be demand for very specific configurations in the future, MCUs are popular because of their general-purpose nature, which means there are already many devices on the market that can easily meet the initial needs of IoT applications, in terms of cost, power, performance and features.

The issue of low power operation is not new, of course, and most manufacturers fully understand the trade-offs developers need to make between performance and power consumption. As a result, the majority of MCUs that have been introduced over the past several years have been designed to offer some form of power management. Typically this comes in two guises; low-power operation and power-saving sleep modes. Both will be crucial in the IoT, as many of the smaller nodes are expected to operate from a single battery and, ideally, be maintenance-free for several years after going into service. This acutely highlights the need for low-power operation and good power management features.

Fortunately, many of the nodes deployed will have extremely modest performance demands by most standards, meaning that as long as developers fully exploit the power-saving features of an MCU, they should be capable of meeting extended operational lifetimes from a single battery. While it may still be more aspiration than realization, the demand for nodes that operate only from power scavenged or harvested from its environment will undoubtedly grow as more diverse use-cases emerge. This will be driven by and enable another mega-trend emerging across many vertical sectors; Big Data. The IoT will play a key role in enabling this and the two are likely to be somewhat symbiotic in the future.

While physical size will be critical, it cannot come at the price of features. To support IoT applications the list of ‘must have’ features will likely include flexible analog and digital interfaces (to accommodate a range of sensors) and some form of connectivity. Increasingly that means wireless, so a level of RF integration will be highly sought after.

From the many MCUs available today, three stand out as offering the right combination of features: the Si106x/08x from Silicon Labs, the CC2538 from Texas Instruments, and the nRF51422 from Nordic Semiconductor. 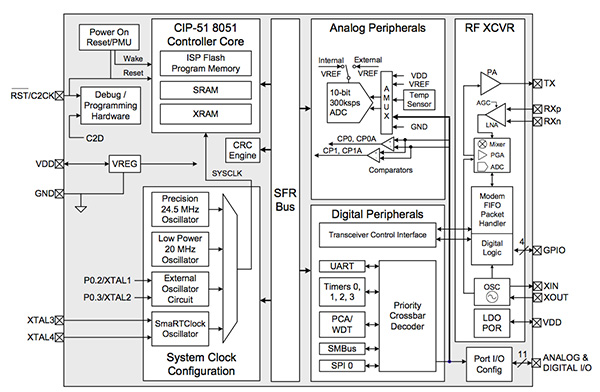 As shown in Figure 1, the Si106/x/08x integrates Silicon Labs’ proprietary 8051 core, the CIP-51, which is code-compatible with the MCS-51 instruction set while offering the peripheral set of a standard 8052. Silicon Labs has designed the core as a pipelined architecture, which greatly improves instruction throughput over a standard 8051 architecture. The majority of instructions in a traditional 8051 take 12 or 24 system clock cycles to execute, while the CIP-51 executes 70% of its 109 instructions in one or two system clock cycles, and only eight instructions require four or more cycles.

However, perhaps more importantly, the Si106x/08x range of devices integrate a low-power Sub-GHz transceiver, which includes a power amplifier that consumes just 85 mA when generating +20 dBm output power at 915 MHz, and 70 mA at 169 MHz. This efficiency is even more apparent at an output power of +10 dBm, when it drops to just 18 mA. The power amplifier also implements automatic ramp-up and ramp-down to minimize spectral spreading, as well supporting frequency hopping and antenna diversity.

Thanks to its low power and the ability to implement simple or customized protocols, nodes operating at Sub-GHz frequencies will likely be widespread (as they are today), however the IoT will also require a level of interoperability between manufacturers, and in this scenario, a standard protocol is often required. One protocol likely to be prevalent here is, of course, ZigBee. The CC2538 from Texas Instruments is a ZigBee-enabled RF MCU which employs the ARM Cortex-M3 core capable of running at up to 32 MHz, coupled to a 2.4 GHz IEEE 802.15.4-compliant transceiver (Figure 2). Furthermore, the device is capable of supporting dual ZigBee application profiles. In order to keep the node secure, it also integrates an AES-128/256, SHA2 hardware encryption engine and an optional hardware acceleration engine for secure key exchange. 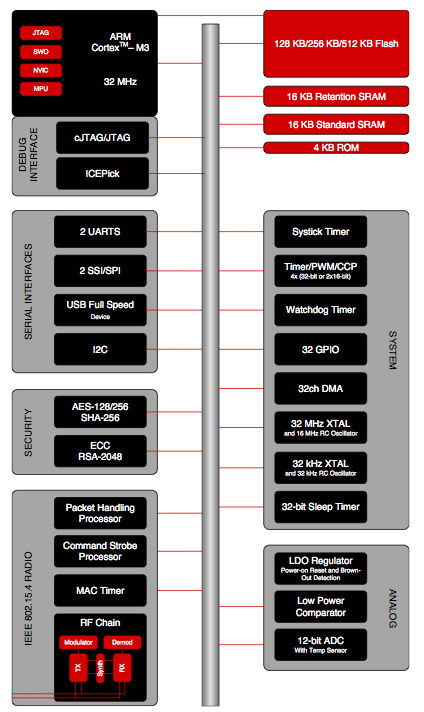 A third option offers a low-power solution to developing IoT nodes that comply with the Bluetooth Low Energy protocol, the nRF51422 from Nordic Semiconductor. This device integrates the ARM Cortex-M0 core and a multi-protocol 2.4 GHz radio, capable of running Bluetooth, ANT/ANT+ or proprietary protocols (Figure 3). The Bluetooth and ANT protocols are offered as pre-compiled binaries from Nordic Semiconductor, removing a further development phase. 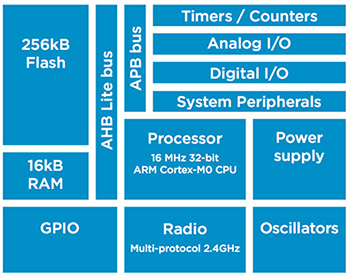 Figure 3: The nRF51422 from Nordic Semiconductor focuses on low power by integrating the ARM Cortex-M0 core and a Bluetooth Low Energy-compliant transceiver.

Big data and the IoT

While many of its inevitable benefits remain somewhat undefined, the IoT will initially allow pseudo-intelligent devices to be not only reactive but also proactive. Nodes will determine actions based on data they have either gathered directly, or had passed to them through their local network and, more significantly, any other network with access to the Internet.

This data, which will be ‘created’ by nodes measuring every parameter conceivable, will represent enormous amounts of information -- the so-called ‘Big Data’ paradigm. While mining this wealth of information will fall outside the responsibility of most IoT devices, they will no doubt make good use of it, relying on other (cloud-based) processing farms to do the majority of the collating, analyzing and distributing.

IoT nodes, meanwhile, will become the ‘worker bees’ of this new digital ‘hive’, and as such they will work relentlessly to collect data. More than that, they will become an integral part of modern life, automating many tasks that will allow users — and other nodes — to operate more productively. Sensor-enabled nodes will likely become the most widely deployed of all variants, and along with being powerful enough to locally process the data they collect, they will need to be capable of transmitting this data in a power-efficient way across their local network, mostly using a ‘gateway’ device that acts as a local hub. This gateway will be mains-powered and feature much more processing power than the average node, acting as a coordinator for many tens or even hundreds of nodes on its local network, relaying much of the data they provide on to other networks via a Wide Area Network or, indeed, the Internet.

In this scenario, the short list of requirements for an MCU suitable for deployment in an IoT sensor-based node become clearer to determine, allowing developers to quickly focus in (or rather discard) many of the thousands of general-purpose MCU variants available today.