Inside the New LED Retrofit Bulbs

The first LED replacements for 60 W incandescent bulbs are now appearing on shelves in local stores across the United States.

The LED bulb that has received the most attention so far is the AmbientLED Model 12E26A60, a 12.5 W, 800-lm replacement for 60 W incandescent bulbs made by Philips Lighting (Figure 1). It is similar in configuration to the bulb that won the U.S. Department of Energy’s first Bright Tomorrow Lighting competition, or L Prize. It was also declared a standout among the CFL and LED bulbs in lamp and ceiling fixture tests conducted by Consumer Reports magazine. 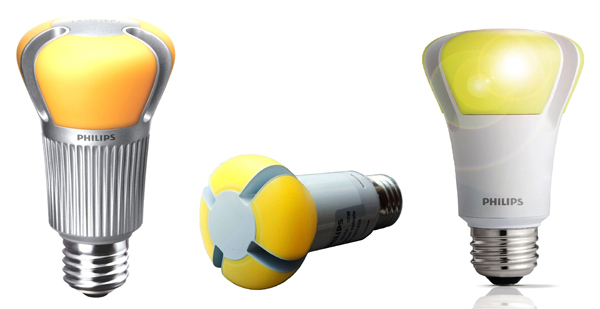 Figure 1: Philips Lighting’s 800-lm, 12.5-W AmbientLED (left) is a replacement for 60 W incandescent bulbs. The LED bulb is similar to the Philips bulb (center) that won the first Bright Tomorrow Lighting, or L Prize, competition from the U.S. Department of Energy, but the latter has four lighting segments while the former has three. In 2012, Philips’ will begin selling the bulb at left, which includes features from both the current and L Prize bulbs. (Courtesy of Philips Lighting).

At first glance, these yellow-orange-colored bulbs do not look like they would produce the 2,700 K warm-white light we’ve come to expect from a typical household incandescent bulb. That’s because the LED bulb’s outer plastic surface has a remote-phosphor coating on its inside, which is actually key to its performance. The phosphor efficiently converts the light of high-efficacy blue LEDs into warm-white light while simultaneously making the lighting even across the surface.

Intematix Corp.’s ChromaLit remote phosphor technology (Figure 2) is commercially available in various shapes and sizes. Thus designers can easily make use of the technology for whatever lighting designs they may be considering. 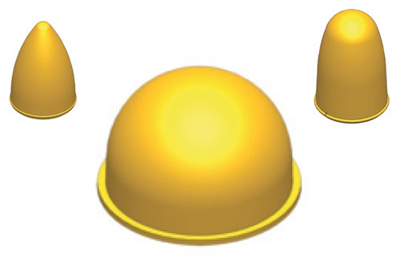 Figure 2: ChromaLit remote-phosphor technology is available in candle and dome shapes (shown above), as well as flat square, round, ellipse, and more.

The bulb actually uses three sets of six blue LEDs. In each of the three portions of the lamp, the LEDs are set on a board that is held in place against the heat sink by a plastic frame that is screwed to the heat sink. A piece of thermally conductive padding sits between the board and the heat sink.

Cree recently introduced the XLamp XT-E Royal Blue LED (Figure 3), a high performing source of blue light for remote phosphor applications that the company says sets new standards of efficiency and light extraction in royal blue LEDs. Compared to the standard XLamp XP-E Royal Blue, the XT-E Royal Blue is up to 20 percent more efficient, and is available with minimum radiant flux of 475 or 500 mW when operated with a 350-mA driving current and a high, but realistic, junction temperature of 85°C. 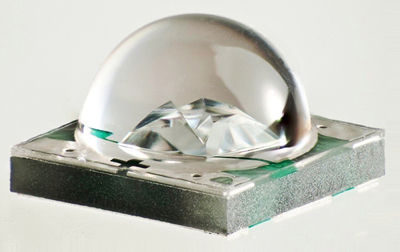 The LED lighting boards all have connectors which provide a more reliable design than simple soldered wire. The leads from the boards go through the center of the heat sink to connectors on a small board that is connected to the lamp’s driver electronics system (Figure 4). The AmbientLED is designed to work with standard dimmer circuits, and so requires more than a simple AC/DC converter.

On one side of the driver board are the capacitors, inductor coils, and heavy-duty resistors. On the opposite side of the board are the driver chip, chip resistors and capacitors that take on the digital functions needed to control the LEDs. The triac-dimmer-adjusted 60-Hz AC signal coming into the lamp is converted by the driver into a Pulse Width Modulation (PWM) signal that turns the LEDs ON and OFF for variable amounts of time. The switching frequency is high enough that the human eye does not perceive any flicker, yet the eye sees the decrease in light output as a continuous even dimming. 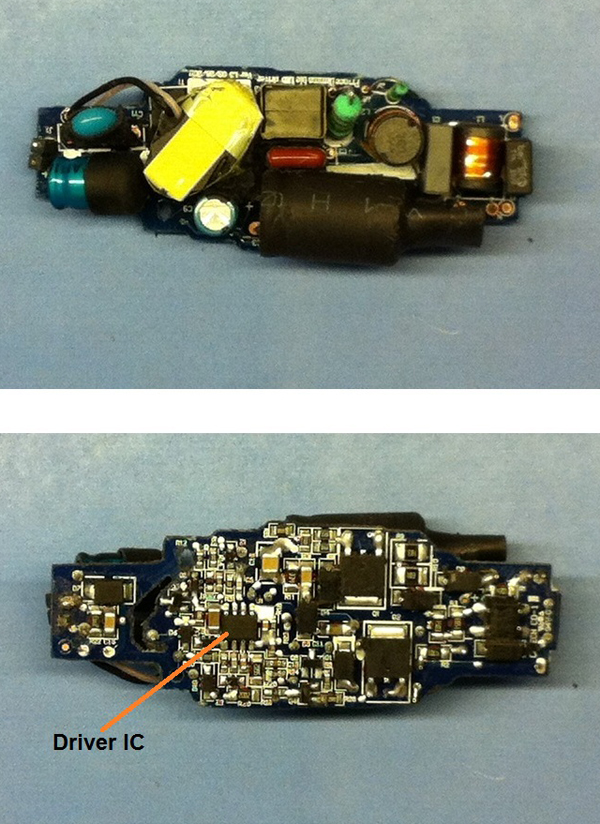 Figure 4: On one side of the driver board (top) are the capacitors, inductor coils, and heavy-duty resistors that tackle the 120-VAC input to the lamp. On the opposite side (bottom) is the driver chip, at the left side of the board.

The EZ-Color family supports a range of independent LED channels -- from 4 channels at 32 bits of resolution each, up to 16 channels at 8 bits of resolution each -- to let designers choose the most suitable LED array size and color quality for their application. PSoC Designer software, with lighting specific drivers, can significantly cut development time and simplify implementation of fixed color points through temperature, optical, and LED binning compensation. EZ-Color's broad analog and digital customization capability enable simple integration of features in addition to intelligent lighting.

While the AmbientLED has enjoyed an early success, it is unlikely to be the final word in incandescent replacement bulbs. Indeed, both Cree and General Electric have unveiled LED bulb designs which they hope will also receive the approval of the DoE. With the wide availability of components for LED bulbs, practically any designer can try his or her hand at inventing the next light bulb.