Remember how we used to push buttons, flick switches, or turn knobs on a consumer device? Now, fueled in large part by the Apple iPhone’s introduction of multi-touch zooming capabilities, users can pinch and spread content on the screen for ease of readability; a cool slide of the finger or wave of the hand activates device functions much faster that mechanical controls could, and is definitely more reliable.

The concept of touch-based technology actually predates the iPhone by several decades. Dr. Sam Hurst developed the first touch sensor in 1971 while he was an instructor at the University of Kentucky, and during the 1990s, adoption of touch sensors was driven by ATMs and point-of- sale systems.

However, it was not until we learned to tap, brush, and pinch our iPhones that we became familiar with the seamlessness of the touch interface (in this case, projected capacitive touch). This article, the first of a two-part series, will explore the different varieties of touch-based technology including projected, resistive, surface capacitive, infrared, surface acoustic wave (SAW), and optical imaging. In Part 2, we will present specific controllers and drivers and focus on demo and evaluation kits developed so design engineers can more easily implement touch technology.

Magic in your fingers

The use of a finger or stylus – or touch gesturing – provides both high resolution and high refresh rates to the display. There are many other advantages, including: The magic is not just in the display, however. The most common version of projected capacitive touch, called mutual capacitance, makes use of the fact that most conductive objects are able to hold a charge if they are very close together. If one conductive object, such as a finger, comes close to another conductive object, the charge field (capacitance) between the two objects changes because of the conductive properties of the human finger (conductive electrolytes are covered with a layer of skin).

Indeed, it is the additional charge storage capacity or finger capacitance that is actually sensed. The finger holds that charge. Sensing can take place whether the finger actually makes contact, or instead floats or hovers near a display surface. In a mutual-capacitance touchscreen, transparent conductors are patterned into spatially separated electrodes in two layers.

As we will see, each of the other available touch sensor technologies detects touch differently, and some can detect gestures without direct contact or by the absence of touch. Let’s look now at some of these touchscreen technologies.

Still the most common touch method, resistive technology is widely used because of its low price and ability to employ a number of input objects. It features two layers not directly in contact with each other, but separated by a thin space. Resistive touch uses a controller and a coated glass overlay. The touchscreen is made up of two thin, electrically conductive layers with a narrow gap in between. When pressure is applied to a point on the outer surface of the panel, the two layers connect. The touch registers as a change in electrical current. Unlike optoelectronics, which is free from continual recalibration, resistive technology is not. As the resistive film becomes scratched or begins to break down from use, recalibration is required.

Surface acoustic wave (SAW) technology is known for its image clarity, but it only works on small screens. Ultrasonic pulse waves are passed over the glass screen panel. When the panel is touched, part of the wave is absorbed, registering the actual position where the touch occurred and sending information to the controller. This technology is commonly used in ATMs, kiosks and in banking. It is not ideal for certain applications due to “noise.” The display is also susceptible to contamination and must be cleaned or replaced, which makes it less than ideal for industrial use.

Infrared technology also relies on the interruption of light in front of the display touchscreen to create a measureable event. Touch occurs on a glass face in front of an LCD and emitters and sensors along the viewing area are built into a raised bezel. Infrared LEDs and phototransistors are mounted on opposite sides to create an infrared light grid. Touch obstructs the infrared beams, and it is the absence of light that is detected. These screens are used in medical and industrial applications. The fact that they are sealed and avoid contamination makes them ideal for these applications.

Capacitive touchscreens are all glass, with applications running the gamut from industrial functions based on durability, to kiosks and ATMs. For this type of touch mechanism, electrical current runs across the screen and the screen’s corners have circuits that measure the capacitance of touch on the overlay. It works when the current is interrupted by the act of touch. Capacitive touch is only activated by the conductive electrolytes in a human finger, and not a stylus or other instrument.

An example is 3M’s 17-8031 a 15.68” overlay capacitive touch system, the MicroTouch™ ClearTek™ II (Figure 1), which uses the required finger-input method. Reported touch coordinates are within 1.0 percent of true position within the precision area when linearized and used with 3M’s MicroTouch EX II Series Touch Controllers. Touchscreen resolution defaults to electronics and software settings, typically 1024 x 1024, but it is capable of 16K x 16K when used with EX II electronics. 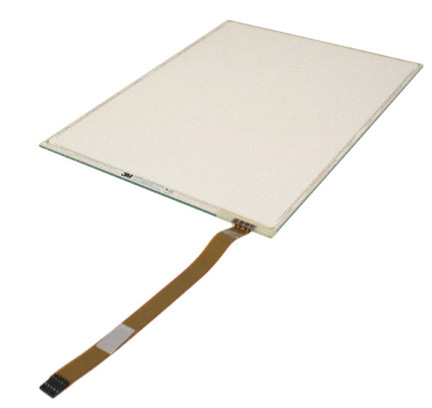 
ClearTek II features a hard coat with optimal anti-glare properties. The scratch-resistant top coat provides a smooth and easy glide touch surface. With this product, the minimum contact required is 5.4 ms for finger input. The glass surface is 3.18 mm typically, not including flexible tail connection. In this case, the display sizes supported are 6.4 to 32 in. diagonal.

In other system types, a finger is not the only catalyst for operation. Optical sensors are used to detect a touch point, and the act of touch is registered just before contact with the screen. Contact is typically with a finger, but a stylus, pen, or other devices also work. Optical imaging eliminates calibration drift. Once calibrated the touchscreen does not require additional adjustments.

The Atmel ATEVK1010A (Figure 2) is an evaluation board based on Atmel’s single key capacitive touch controller. This calibration-free device is low cost and easy to implement. It comes in a 2.9 x 1.6 mm SOT-23 package, and feature low power consumption (17 μA at 1.8 V). There is a range of response speed settings and it has a maximum on duration of 60 s. If there is an obstruction on the sensor, the device output will go low after the maximum on detection period so that subsequent touches can be detected. The device features three speed settings: fast, a low power slower version, and the ability to synchronize the device to an external clock, synchronizing several ICs in the same device. This last option can enhance noise immunity. 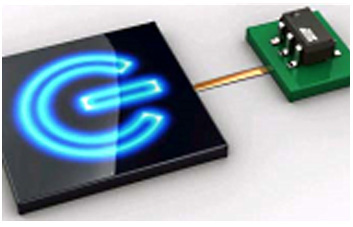 
Standard features of the Atmel family of devices include drift compensation algorithms to constantly adjust the reference level, ensuring the device remains calibrated, spread spectrum acquisition to reduce emission levels and susceptibility to interference, minimal power consumption, capacitive settings to work with a wide range of panel thicknesses and materials, automatic calibration on power up and signal processing that helps to suppress detections caused by electrical noise and quick brushes with the surface.

In comparison, the Atmel AT42QT1011 is a digital burst mode charge-transfer sensor (Figure 3) capable of detecting near-proximity or touch making it ideal for replacing mechanical buttons, sliders and wheels.

Figure 3: The Atmel AT42QT1011 uses bursts of charge-transfer cycles to acquire its signal.


The self-contained digital IC projects a touch or proximity field to several centimeters through any dielectric like glass, plastic, stone, ceramic, and even most woods. It is designed specifically for human interfaces such as control panels, appliances, toys, lighting controls, or anywhere a mechanical switch or button may be found.

In Part 2 of this series we will feature more ICs that support touch sensing and examine some demo and evaluation kits developed to help you to easily implement touch technology.