A look at solutions that achieve high efficiency in LED driver circuits using components from Texas Instruments, STMicroelectronics, and ON Semiconductor.


LED driver manufacturers continue to look for ways to lower cost, cut component count, and simplify the design and implementation of LED driver circuits. This work is being done across the board for SSL applications, from indoor lighting fixtures to area and street lighting uses.

In this article we will discuss three solutions that address different markets. Our first example is Texas Instruments' TPS92411 floating MOSFET switch, which uses the company's AC switched-matrix technique to replace flyback, buck, and boost converters in lamps and downlights. Designed to simplify the offline linear drive of LEDs in these applications, the TI approach delivers low-ripple LED drive current without magnetic components. One of the key benefits here is that the solution does not require any inductive components for power transfer. Upshot: It cuts cost and size while simplifying the circuit design.

In the second example, we will inspect the STLUX385 from STMicroelectronics, which the company touts as the industry's first digital controller that is dedicated to lighting and power conversion. With embedded state machines and a digital addressable lighting interface, the STLUX385 is said to provide faster design of digital lighting controllers while providing greener, safer, and more cost-effective lighting, particularly for street lights and buildings.

Our third example is ON Semiconductor's NCL30160, a constant-current step-down buck regulator LED driver. It can be used with the NCL30051, an offline power factor correction (PFC) controller and resonant half-bridge combo device. Together, these devices integrate all the features required to implement a small-form-factor driver, simplifying the system design.

Let's now take a closer look at the Texas Instruments technology. The TPS92411 floating MOSFET switch, which employs the company's AC switched-matrix technique, is used to replace flyback, buck, and boost converters (traditional switch-mode power supply (SMPS) topologies) in lamps, downlights, and fixtures. It is touted as the industry's first floating-switch architecture that simplifies the offline linear drive of LEDs and is used in conjunction with a current regulator that can attain greater than 0.9 power factor (PF) to create an LED driver with low ripple current.

This solution is an "innovative approach to producing low-ripple LED drive current without magnetic components," according to TI. In addition to the high PF, the TPS92411 also offers low total harmonic distortion (THD), while offering compatibility with legacy wall dimmers.

One of the key advantages of the floating-switch architecture is that it does not require inductive components for power transfer, which cuts cost and space, while simplifying design. This is unlike designs using flyback, buck, and boost converters, which operate at high frequencies and require inductive components to turn mains AC current into the constant DC current required to drive LEDs. These circuits also require an electromagnetic interference (EMI) filter consisting of four to ten passive components to prevent the SMPS circuit from damaging other electronic equipment. If phase dimming is required, several design iterations may be required to optimize dimmer compatibility and to prevent LED flicker, according to TI.

An evaluation board (TPS92411EVM-001) is available. The TPS92411EVM-001 provides a high-brightness LED driver based on the TPS92411 in conjunction with a discrete linear regulator. It is designed to operate with an input voltage in the range of 90 to 135 VAC with a 120 VAC nominal input voltage. This input voltage range is typical for offline applications. 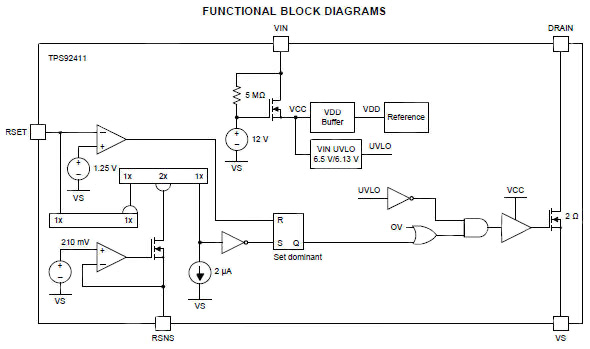 Figure 1: The TI TPS92411 simplifies the design of phase-dimmable LED drivers thanks to its high PF, low THD, and low-current ripple (Courtesy of Texas Instruments).

For street lights and building lighting, STMicroelectronics claims the industry's first digital controller that is dedicated to lighting and power conversion. Depending on factors including the lighting technology used, the input power source (AC or DC), dimming requirements, and safety or reliability issues, there are different types of power conversion and control topologies that can be used in current and emerging lighting applications. STMicro says the STLUX385 is the first device that can address all of these via a single programmable chip.

The STLUX385 programmable digital controller takes aim at simplifying the design of traditional power-conversion topologies, while ultimately speeding up the development of lighting systems. It has been implemented in a variety of applications, including buck converters for driving multiple LED strings, boost for power factor corrections, and half-bridge resonant converters for high-power dimmable LED strings.

The STLUX385 (Figure 2) combines the STM8 microprocessor core and a "unique set" of peripherals aimed at simplifying the design of the lighting power supply and digital lighting control. This is primarily thanks to the integration of six specially-designed peripherals called State Machine, Event-Driven (SMED) circuits that interact with each other and external signals via a programmable switching matrix to control the power delivered to the lighting elements, explains STMicro. 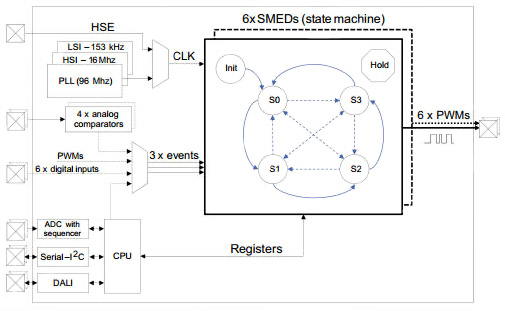 What's interesting about the SMED circuits is that they can process external commands to do a number of things such as turning the lights on/off or setting the dimming level, diagnostic signals, or inputs from sensors in applications where the lighting is designed to adapt to ambient conditions. What does this mean? It opens up new opportunities for intelligent lighting. In one example cited by the company, the device can be used to design intelligent LED street lamps that increase brightness as daylight fades, as well as reduce their brightness as the sun rises.

The STLUX385 delivers several advantages. It can reduce cost and shrink time-to-market in the design of sophisticated lighting systems that typically require the use of more expensive digital signal processors. With the integration of a hardware DALI (Digital Addressable Lighting Interface) peripheral, the device can deliver energy savings in buildings and outdoor lighting installations. In addition, it is compatible with wired or wireless communications, which means it simplifies the installation in both large indoor or outdoor areas.

Key features of the STLUX385 include: Next, let’s consider a two-part solution that can also be used in street light applications. ON Semiconductor's NCL30160 is an NFET hysteretic step-down, constant-current driver for high-power LEDs that can be used in a variety of ways including automotive, industrial, and general lighting applications using minimal external components.

The NCL30160 may be used with ON Semiconductor's NCL30051, an offline PFC controller and resonant half-bridge combo device for high-brightness LED applications that require very-high efficiency, particularly for area and street lights. Together, they simplify power circuit designs with the least amount of external components. 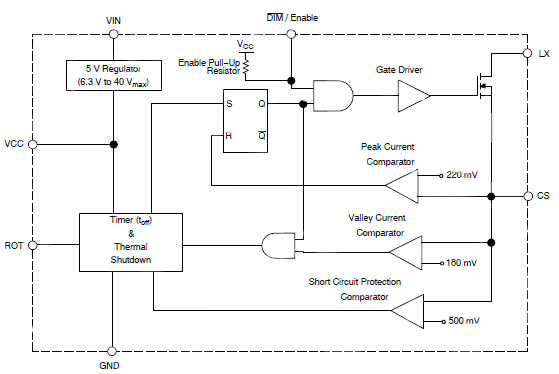 The NCL30160 and NCL30051 devices work together with the NCL30160 taking the constant voltage delivered by the NCL30051-enabled power supply and stepping down the voltage to provide a constant current across the LED string. Solutions with up to 98 percent efficiency are achieved by using the low 55 mΩ internal MOSFET and the ability to operate at 100 percent duty cycle, according to ON Semiconductor. In addition, the high switching frequencies up to 1.4 MHz allows for the use of smaller external components, helping to minimize board size and cost, while the hysteretic control of the NCL30160 provides fast response during load transients and eliminates the need for small-signal control loop compensation components.

In summary, engineers should always evaluate new and innovative designs in LED driver circuits as a way to achieve the highest efficiency possible together with the fewest number of components. In this article we have examined three solutions that address different markets; all three help to ensure the success of LED designs by meeting the cost budget and design parameters set by SSL product suppliers.