With switches and buttons, linear or rotary potentiometers driven by wheels and sliders, industrial control panels were mechanical playgrounds.

With switches and buttons, linear or rotary potentiometers driven by wheels and sliders, industrial control panels were mechanical playgrounds. Being mechanical, they had the potential to be a source of problems, from the soldered joints to the moving parts. Being built for one specific set of control tasks, the boards were difficult, if not impossible, to reconfigure for any others. They were not easy to learn how to use and, for complex operations, were often accompanied by a screen to display the status of equipment.

Today, these are a vanishing breed. Instead, new installations are entirely solid state; they use touch panels on a display screen driven by a GUI (Graphical User Interface). By changing the screen image, the area above it on the touch panel will be visually linked to a different function. This means that, as well as being reconfigurable, the system can coach a user through operations, perhaps on start-up or shut-down, perhaps when something unusual happens. While this approach has the virtues of an interface that is more robust, easier to clean and more tolerant of a wide range of environments, it comes at a price: software and, often complex, software.

Of course, the different equipment, controlled by the screens, is itself managed by processors and software. The individual pieces of machinery communicate with each other and the overall system controller over some kind of bus, like CAN or Industrial Ethernet. Usually there is a strong element of real-time control needed and the applications may be safety critical, so the architecture of the entire system needs to be designed to segregate the touch screen controller and GUI from the overall system data, except through a secure defined interface. In this way, any issues with the GUI software will have no effect on the safety of the overall system or individual pieces of equipment.

In this article, although we will be looking at physically separate controllers, much of the discussion will also be relevant to a touch screen controller running in a virtual core. 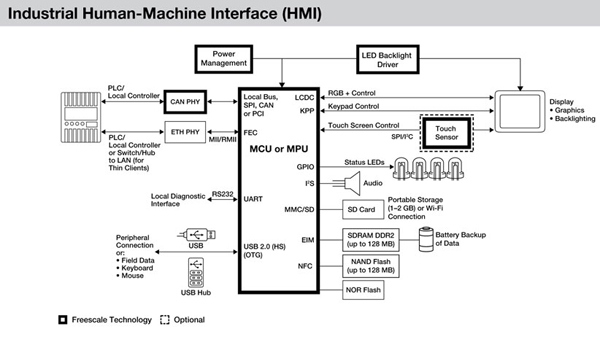 Figure 1: Touch screen control in the context of an industrial HMI. In this case the same MCU/MPU appears to be running both equipment, through CAN bus to a PLC, and the touch screen interface.

There are multiple touch screen technologies, but the two most common, in fact the two that dominate the market, are capacitive and resistive technologies.

Resistive screens are usually two layers of glass or plastic, separated by an air gap. One layer will have horizontal conductive lines, the other vertical. Pressure on the upper layer will link these lines, giving an XY coordinate. Different detailed technologies are used, but normally the screen will have four ports to connect to the controller.

Capacitive sensing screens use a variety of detailed technologies, but rely on a conductive substance, like a finger, changing the capacitance of an area of the screen and then sensing this change as an XY coordinate. There are limitations of capacitive sensing in an industrial application: if the finger is within a glove, particularly a heavy work glove, there may not be enough capacitance change to be measurable, and environmental factors, such as RF emissions, may affect the capacitance. Both technologies can be used for multi-touch input – two fingers moving apart or together to zoom into or out of an area in the GUI, for example. 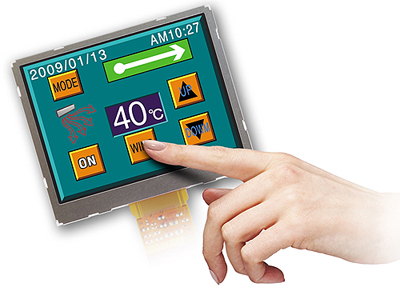 The touch screens display some form of a GUI. This may be a general-purpose interface, such as a version of Windows, or it may be one generated specially for that application. Clearly, memory size in the controller is going to be a significant factor in choosing the interface. Other factors will include the complexity of the display needed, the cost limitation, and the size of the display screen.

The quality of the images displayed is not always thoroughly explored. It is rarely enough to just pick out a few symbols or icons from a library and put them on a screen. There has been considerable research on interface design and there appears to be a group within the ISA (International Society for Automation) working on the ISA101 standard. A discussion of the issues they are considering is available here.

Many microcontroller manufacturers now offer support for touch sensing, although frequently these are aimed at hand-held and portable devices. In the industrial arena, Atmel has been a significant player, particularly since the acquisition of Quantum Research, a manufacturer of touch sensitive devices, particularly sliders, wheels, and buttons. As well as the wide range of AT42QT dedicated touch screen controllers, the company has developed the QTouch touch screen control software library for microcontrollers, and added “Touch Channels” for touch screen interfacing to a number of its processor families, including the AVR UC3 and AT Mega and X Mega families, which also include LCD controllers. Some models, such as some members of the tinyAVR family, also include Hardware QTouch Acquisition. These microcontrollers are supported by a wide range of development and evaluation kits. 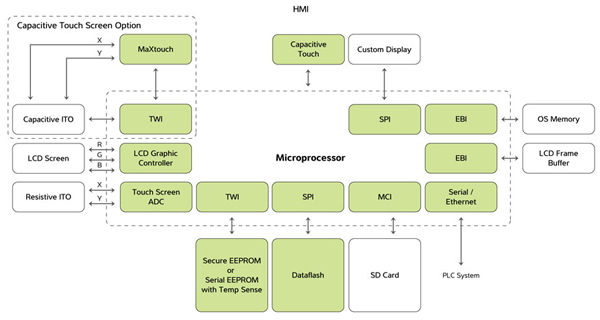 Figure 3: Atmel has dedicated touch screen interfaces in many processors, and some also feature Hardware QTouch Acquisition as a dedicated peripheral interface.

Texas Instruments has developed a family of “Intelligent Display Modules” for touch screen applications, based on the ARM Cortex-M3 Stellaris processors. These can be used as reference designs, and are supported with schematics, a bill of materials, Gerber files for PCB layout and example applications. Additionally, TI will go beyond that, and will sell the modules in volume, making it easier to get into production with a specific application. There are three variants, all aimed at industrial applications with industrial temperature tolerant processors. The options are Power over Ethernet and Gigabit Ethernet, each with a 2.8 inch screen and an option with a larger, 3.5 inch screen. The products are supported by the Stellaris software and graphics libraries, and by the wider ecosystem around the Cortex-M3.

Infineon has added a touch-sensing controller as one of the peripheral interfaces available across the XC82x and XC83x 8-bit microcontrollers. Designed mainly for simple LED-based panels of buttons, sliders or wheels, the controller shares the interface to the screen with the LED-matrix controller through time multiplexing.

Microchip has developed a “metal over cap” capacitive sensing technology. This technology puts a front panel, which can be stainless steel or aluminum, or other appropriate material, over a PCB, with a small air-gap between the two. Under symbols on the top surface are sensors on the PCB. Pressure causes the top surface to deflect, changing the gap between the plate and the sensor, and so changing the capacitance. Depending on the application, the control software can discriminate between soft and hard touches. Metal over cap is particularly relevant to industrial environments requiring simple switching, and is supported, along with capacitive touch, by the mTouch software library. This is supported across many of the 8-, 16- and 32-bit members of their PIC microcontrollers. It is combined in some products with display control, CAN-bus interfacing and USB interfacing. To support this application, there is a range of development and evaluation kits.

Figure 4: “Metal over cap” sensing from Microchip uses the deformation of a metal panel to change capacitance.

The vast majority of the microcontroller offerings for touch screen control are for portable and hand-held devices, and many microcontroller suppliers have developed touch screen control libraries to run on their standard offerings, communicating with the controller through standard general purpose IO (GPIO) channels. While the libraries can be used for industrial control applications, the processors that run them may not be rated appropriately for the harsh conditions normally associated with the industrial environment. This is particularly the case where the microcontroller designer has decided to prioritize low power – not surprisingly for portable devices where battery life is always a major issue.

Touch screen interfaces are going to play an increasingly important role in industrial automation, because of their inherently robust nature and ability to cope with the harsh world of manufacturing. However, while superficially simple to deploy, if they are going to be effective, designers are going to have to take great care on the interface design and on the relationship between the software for the interface and the software running the safety critical applications.