HB LED lighting needs proper thermal management in order to utilize the many advantages of LEDs, including long L70 lifetime, instant on, better optical control, and, most importantly, low maintenance and reduced energy usage. Industrial applications pose other challenges in addition to the thermal management requirements. Components need to be rugged in order to operate properly and to survive the elements. Although traditional air movers, such as axial fans, could provide an adequate forced convection thermal solution, this article will focus on synthetic jet cooling technology, specifically Nuventix SynJet technology, which is an alternative air moving technology for forced convection cooling. This article looks at synthetic jet technology and complementary LED heatsinks as a rugged and reliable cooling solution that could be used in harsh environments to ensure effective LED thermal management solutions.

Although synthetic jets have been known and researched for many years, synthetic jet products are relatively new to the market. Synthetic jets are formed by creating a periodic suction and ejection of fluids through an orifice, generated by an oscillating diaphragm in a cavity surrounding the diaphragm. The jets are “zero-mass-flux,” thus there is no need for ducting or piping in the medium for cooling. When these jets are directed at LED heatsink surfaces, they remove the heat much more efficiently than natural convection.2,3,4

Synthetic jets can be generated in many ways, but one mechanism is the use of electromagnet actuators which create the driving force for oscillating the membrane, the method Nuventix uses for their SynJet (Figure 1). As the membrane oscillates within the cavity, synthetic jets are created at the nozzles positioned around the cavity. There are many advantages to using electromagnetic actuators including no moving parts to cause friction, no lubricants, and no bearings to wear out. These inherent design differences between synthetic jets and traditional air movers such as fans and blowers are what differentiate these products in terms of ruggedness and lifetime. The main failure mode of fans and blowers is lubricant breakdown. This does not exist in synthetic jet products.5,6 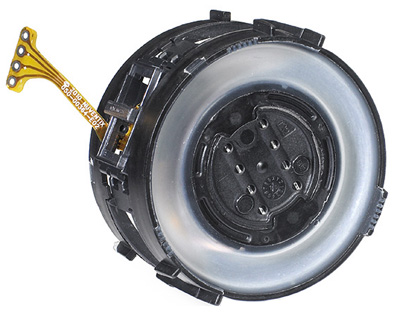 Synthetic jet cooling allows for smaller form factors, lower operating temperatures, and dynamic airflow control for effective temperature control of the LED heatsink. Synthetic jets have been shown to have higher Nusselt numbers, hence higher effective heat transfer over conventional ducted flows by a factor of six or greater at the same channel Reynolds number. In addition, when comparing the thermal resistance of an LED heatsink (θs-a ) cooled by synthetic jets or ducted flow at the same volumetric flow rate, synthetic jets have demonstrated as much as a 40 percent improvement in thermal performance. When compared to natural convection, synthetic jets have demonstrated 300 percent thermal improvement with the same form factor heatsink.7

The higher heat transfer capability at low flow and significant improvement over natural convection is due to the turbulent vortex dominated jet flow which enhances the mixing of the thermal boundary layer and allows for improved thermal performance. For example, Figure two compares a 100 W design with forced cooling and natural convection cooling. The forced convection provides a 20 percent improvement in cooling performance (θs-a), with a 200 percent smaller volume and 600 percent reduction in weight. 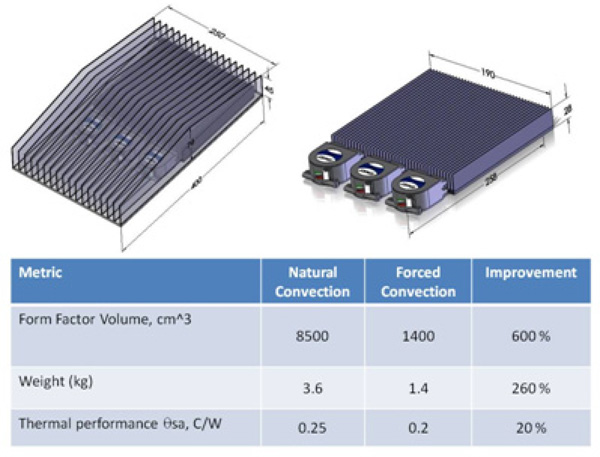 
Nuventix’ ZFlow 90, and Spotlight Cooler 60 W and 70 W for downlights and low-bay lighting are an example of a synthetic jet-cooled product available on the market today via Hotenda for industrial lighting. Created for small, lightweight and cost effective design, this spotlight cooler utilizes forced cooling to dissipate 70 W, while enabling up to 10,000 lumens of light in a 118 to 134 mm form factor. 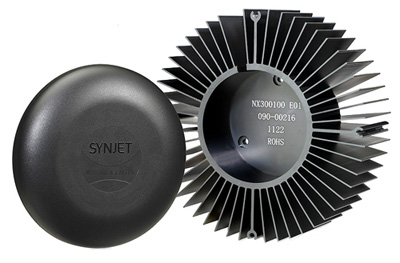 
Although the use of forced cooling has the many benefits listed above, there are several elements that need to be considered for industrial lighting: reliability, ability to withstand dust buildup, cleaning, and ability to withstand temperature fluctuations. An effective LED light requires components that can withstand such elements. Synthetic jets offer a rugged and reliable solution. Nuventix SynJets are typically tested against high temp/humidity, shock vibration, dust and power cycling.8

The next sections highlight the various testing that is conducted on Nuventix SynJet devices and the importance of this testing.

The local environment of a cooling solution in an industrial facility depends very much on the construction of the enclosure and the location and orientation of installation. LED lighting in industrial facilities often experiences a wide range of temperatures and humidity. SynJets have been tested to handle temperatures as cold as -40°C to as hot as +85°C.

Furthermore, industrial environments are often subject to large amounts of dust and particle build-up, which interact with light fixtures and may reach internal components, such as the LEDs, electronics, drivers and cooling solutions, impacting functionality or lifetime.

Even ratings for ingress protection (IP) will not reveal how the lifetime of a product is affected by harsh environments, but rather testify to its safety and ability to function under those conditions in the short term. Here, we focus on the cooling solution of a luminaire which must exceed the lifetime of the LEDs, so far that it contributes positively to the overall lifetime of the luminaire via extension of the LED lifetime, and does not limit it further.9

Given the unique requirements for the different products and environments, there is no one standard or set regimen of testing that can guarantee suitability across the board. Moreover, a robust product, with reliability designed in, must be measured up to the intended usage environments from the early design phase through the production release. A thorough review and qualification of the subcomponents, materials, and even processes used in manufacturing is a must when designing for reliability.

As a result, the latest SynJet family of products has eliminated all structural adhesive joints, and all materials and components must pass a 60 hour autoclave test (Highly Accelerated Stress Test, HAST) at 123°C, >95% r.h., and 2 atmospheres pressure.

With input from numerous customers, Nuventix has developed a platform-based comprehensive qualification test matrix for synthetic jet products that helps in predicting long-life performance under all realistic conditions, some of which are discussed below.

Thermal cycling, besides exposing the materials to a wide temperature range, addresses designs with mismatched coefficients of thermal expansion (CTE), and stresses joints and material properties. By going 200 times or more between -40°C and +105°C, soaking for an hour at each temperature and transition ramp rates of 5°C/minute with no failures allowed, this test adds to the assurance of a robust product suited for harsh conditions.

The effects of high temperature and high humidity can be surprising. Two major areas are affected: plastic material degradation and metallic corrosion. All synthetic jet types are tested for a minimum of 2,000 hours at 85°C and 85% r.h. with no failures allowed.

Very hot and humid conditions are not as realistic as cyclic humidity conditions with condensation. This can be achieved by cooling a device and then subjecting it to warmer, humid air (similar to taking a water bottle out of a refrigerator which will typically condense a lot of water from a sufficiently humid atmosphere). Repeating this process with subsequent drying 200 or more times in a laboratory environment will bring out material and design weaknesses associated with condensing humidity.

Highly Accelerated Life Testing (HALT) uses a combination step-stress method to determine the margins of operation for a product and highlights weak links in a design. Stressors include cold and hot thermal stress, as well as mechanical vibration stress. The following table shows an example of SynJet limits as determined by HALT.

The following table shows a summary of tests that were done and passed with the latest SynJet family of products. Apart from conditions, the table also indicates the sample size that was used in the test.

Forced convection cooling can offer smaller and lighter-weight designs while maintaining the proper thermal management needed to keep HB LEDs within their design parameters. Synthetic jet technology is an air-moving technology for forced convection cooling that is inherently reliable and rugged due to a construction that does not have moving parts, friction, or require bearings or lubricants. Synthetic jet products are subjected to a rigorous qualification program to ensure the products are robust and can handle a wide application space.

Finally, there is no exact test that can predict performance and reliability under all environmental conditions for every conceivable luminaire design. However, by simulating worst case specific environmental conditions that occur during the expected life of an HB LED light, and using accelerated stress tests for anticipated failure modes, one can gain confidence in synthetic jets and complementary LED heatsinks in harsh environments applications.