The number of RF based Advanced Metering Infrastructure (AMI) systems being deployed is steadily increasing.

The number of RF based Advanced Metering Infrastructure (AMI) systems being deployed is steadily increasing. The RF front-ends of such AMI systems must have very good sensitivity while proving to be immune to any interference coming from different RF- based applications. These interferences must neither hinder the data transmission nor make it impossible to receive the measured data.

Figure 1 shows a typical transceiver design used in an RF based AMI systems.

The transmitter section of the AMI transceiver consists of a balun which transforms the differential signal coming from the RF output of the IC to a single ended signal. After passing through the SPDT switch and the PA, the RF modulated signal is filtered by a SAW filter. This SAW filter suppresses the harmonics as well as the spurious emission generated by the internal phase locked loop (PLL) of the Transceiver IC. The antenna then transmits the data to the meter.

The receiving path is where the trigger signal for data transmission is received. This consists of a SAW filter right after the antenna, a second SAW filter for increasing selectivity, and the balun which transforms the unbalanced signal into a balanced one.

Very often, chip manufacturers promote their ICs with the statement “no SAW filter necessary.” When compared to the suggested discrete filter solutions, SAW filters show many advantages with regards to technical parameters. Even wide band SAW filters provide better selectivity and insertion attenuation together with low temperature coefficients. In Figure 2, a comparison of an LC filter to a wide band SAW filter is shown at 915 MHz. 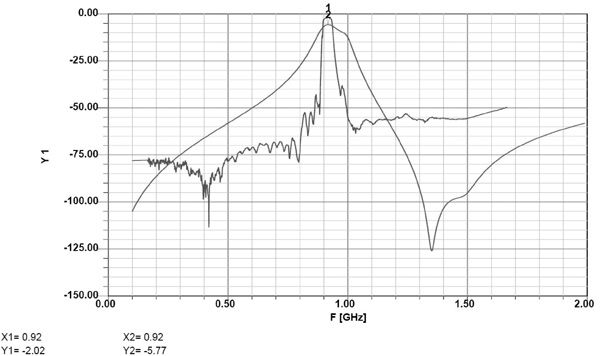 High selectivity is important, especially to suppress interferences coming from other RF transmissions, such as cellular radio for example, which is very close to the most common ISM band used for meter reading transceivers, 902 – 928 MHz. The performance of LC filters is very sensitive to component tolerances and to changes in temperature. Designing an LC filter with the shown selectivity also increases insertion attenuation. In the above example, the LC filter has an insertion attenuation 3 dB worse than that of the SAW. Looking at Figure 1, it can be seen that this front-end uses two SAW filters to provide a better selectivity. The performance of this structure can be seen in Figure 3. 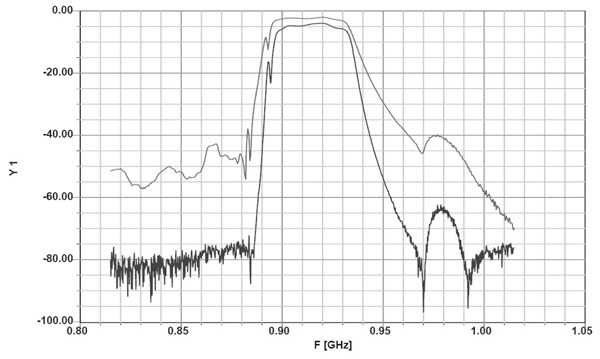 The disadvantage of this circuit topology is the increased insertion attenuation due to the two SAW filters in series. Since the filters are located right after the antenna, they directly influence the sensitivity of the receiving chain. Measurements for sensitivity are the noise factor and the noise figure of the system. The noise factor describes the signal to noise ratio at the input of a two port element relative to the signal to noise ratio at the output of the two port device.

The unit of the noise figure is decibel (dB).

As an example, the noise level at the input of a two port device shall be -90 dBm and the signal level at the input -40 dBm. At the output of the two port device – assuming a gain of 20 dB and a noise figure of 2 dB – the noise level shall be at -68 dBm and the signal level at -20 dBm. The unit dBm in this case describes the RF – or noise power in dB relative to 1 mW (extended form: dBmW).

For proving the correctness of above formulas, the power levels are converted to linear values.

For simple noise calculations with only one two-port device there is no need to convert the power levels to linear values. A simple addition of the “dB” values does the same job.

For two or more two port devices cascaded as shown in Figure 1, a more complex formula has to be used and the power levels given in dB have to be converted to linear values first. Formula 3 shows how to calculate the noise factor when more than one two-port devices are cascaded. The final noise figure NF1-n can be calculated using Formula 2 again.

Whereby Fn and Gn is the noise factor and gain of the respective two-port device.

It is fairly clear that, theoretically, the most important noise figure determining device in a receiving chain is the first two-port device right after the antenna. The noise figure of that device sets the range, where the total noise figure must be located. An ideal circuit topology will have a low noise figure and high selectivity. The following four examples examine how to develop such a topology.

For simplicity reasons, the calculations are done without Tx/Rx switches and baluns. The insertion attenuation (IA) of the SAW filters; the gain (G), noise figure (NF) and the noise factors (F) of the LNA, and the receiver IC are all assumed to be equal for all examples. 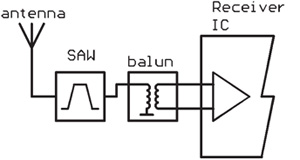 Since the gain of the SAW is negative, the noise figure of the receiver IC has a big impact on the noise added to the incoming signal. This means the noise floor increases by more than 10 dB, or the signal to noise ratio is decreased by 10.9 dB. This in turn reduces sensitivity of the receiver. The advantage of this structure is the blocking of interfering signals out of band of the SAW which protects the internal LNA of the Rx IC from being put into saturation. To reduce the noise figure drastically, a stage with a high gain and a low noise figure has to be put in front of the SAW.

Example 2 shows a structure with a much lower NF. 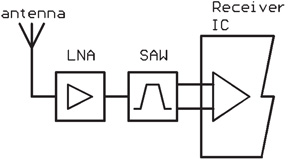 By choosing this kind of front-end structure, the NF can be reduced by more than 8 dB compared to the former SAW – Rx IC structure. The LNA with its high gain and very low noise figure is now the first stage after the antenna and reduces the impact of the SAW and the Receiver IC to the NF. A further advantage of the SAW in this example is to increase selectivity. The SAW is connected differentially to the input of the Rx IC. Since most of the Rx chips provide a balanced (differential) input, the SAW filter can also be designed with balanced output, providing the matching function, and eliminating the need for a balun. Common mode rejection ratio and selectivity can be increased by using this topology. The challenge with this topology is that the receiver is more sensitive to strong interfering signals; like cellular radio for example.

Often AMI sensors are equipped with an additional cellular radio functionality to transmit consumer data to, for example, an interrogating base station. During cellular transmission, the strong signal can be applied to the input of the LNA right after the antenna by electromagnetic coupling or other parasitic coupling on the PCB. This strong signal may put the LNA into saturation and make the receiver blind for the consumer data sent by a different sensor in a mesh network. At the end, this data will not be received. To avoid this, a front-end structure can be used as shown in Example 3.

Example 3 shows a topology providing a compromise between lower noise figure and improved immunity to interfering signals. Here, a noise figure of 4.88 dB can be achieved, which is still much lower than the first approach in Example 1. The SAW filter right after the antenna protects the LNA and reduces the probability of the LNA being put into saturation. Depending on how close the interfering signal is located to the passband of the SAW filter, the possibility of the usage of a second SAW in front of the LNA shall be taken into consideration. This improves selectivity and reduces the interfering signal, as shown in Figure 3. NF will be then be reduced to ~6 dB, which is much better than 10.9 dB. Since discrete LNAs provide a single ended output, a balanced matching structure between the LNA and Rx IC is necessary.

Example 4 shows a final topology which optimizes the use of SAW filters for maximum selectivity and sensitivity in a receiver front-end stage.

This extended version of a receiver front-end provides a noise figure of 5.37 dB. Compared to Example 1, it means that this Rx front-end, including the internal LNA of the Rx IC, adds 5.53 dB less noise power to the noise floor present at the antenna input. Considering that 3 dB less means half the power and 6 dB less a fourth of the power, it gives a good impression about the advantages of this kind of front-end topology.

An improved sensitivity and selectivity together with the advantage of improved common mode rejection through balanced operation of the second SAW filter characterizes this configuration. Therefore it is presented here as the most suitable topology for RF based AMI systems.