Human interfaces that use capacitive sensors for proximity or touch control are changing the way we interact with electronics.


Human interfaces that use capacitive sensors for proximity or touch control are changing the way we interact with electronics. The sensors require no actual pressing on the sensor area, and they work when the user is wearing gloves. A new, patented approach, which includes auto-calibration, increases reliability in difficult environments. This article looks at design considerations for these advanced sensors, and discusses ways to optimize performance and minimize power consumption.

The widespread popularity of smartphones and tablets that use touchscreens as their human interface is evidence that people prefer simpler, more intuitive ways to control their electronics. Capacitive sensors, which make it possible to create a human interface that can be controlled by proximity or touch, are taking this user-friendliness to new places.

Compared to resistive-based sensing, which reacts to changes in resistance created by the touch of a bare finger, capacitive sensing presents several advantages. With capacitive sensing technology, no actual contact is required, which means there's no need to press the sensing area. This gives rise to proximity sensing, which supports control at a distance, and lets the system react to approaching objects. Capacitive sensing also works with the touch of something other than skin (such as a gloved hand or a mechanical pointer), and can be configured to respond to events that generate a predefined change in capacitance.

One popular way to use capacitive sensors is to replace mechanical switches. There are fewer parts involved, which saves cost and increases reliability, and the novelty of proximity/touch interfaces can make the end product more desirable. For example, the proximity feature can be used in cell phones and anti-tampering devices, to detect when the equipment is close to an object or not. Touch-free operation is also useful in environments that use hazardous or explosive materials, since no contact is required, and in medical applications, because the user can still control the system while wearing surgical gloves, and thus maintain a sanitary environment. Proximity sensing also benefits hermetically sealed applications, since the sensor works with dielectric material sandwiched between two electrodes.

One drawback of proximity sensors, however, is the trouble they have compensating for changes in the environment over time. Changes in humidity, for example, dirt collecting on the sensor area, or a change in the moving object can impact sensitivity and reduce performance.

NXP Semiconductors is taking a new approach that lets the sensor adjust itself continuously to the environment. NXP's PCF8883 capacitive sensor uses a patented auto-calibration technology to detect changes in capacitance. The device digitally filters out very slow and very quick changes in capacitance at the input. As a result, the performance of the NXP device is less affected by conditions that can impair or prevent correct functions in other devices. With auto-calibration, such things as dirt, humidity, freezing temperatures, or damage to the electrode do not affect the device function.

Figure 1 gives a functional diagram of the PCF8883, a single-channel capacitive sensor. 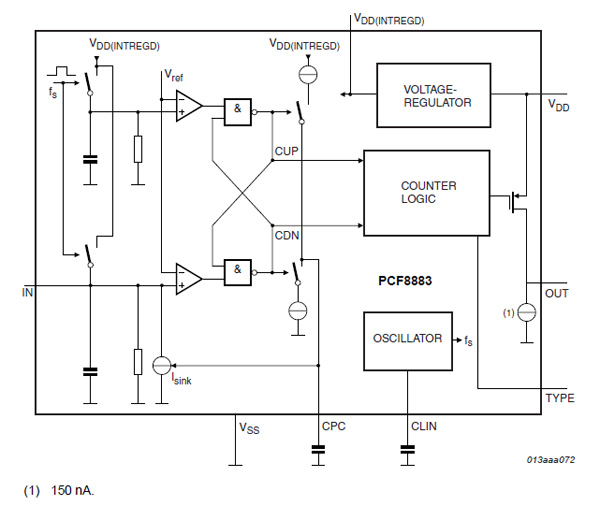 If the capacitance on the IN pin increases, the tdch discharge time increases and it will take longer for the voltage on the corresponding comparator to drop below Vref. Only once this happens does the comparator output become LOW, with the result that a pulse on CDN slightly discharges the external CCPC capacitor. Thus most pulses will now be given by CUP. Without further action, CCPC capacitor would then fully charge.

However, the auto-calibration mechanism, which is based on a voltage-controlled sink current (Isink) connected to the IN pin, attempts to equalize the tdch discharge time with the tdch(ref) internal reference discharge time. The current source is controlled by the voltage on CCPC, which causes the capacitance on the IN pin to be discharged more quickly in the case that the voltage on CCPC is rising, thereby compensating for the increase in capacitance on the IN pin. This arrangement constitutes a closed-loop control system that constantly attempts to equalize tdch with tdch(ref). This allows compensating for slow changes in capacitance on the IN pin. Fast changes, due to an approaching hand, for example, will not be compensated. In the equilibrium state, the discharge times are equal and the pulses alternate between CUP and CDN.

From this also follows that an increase in capacitor value CCPC results in a smaller voltage change per pulse CUP or CDN. As a result, the compensation due to internal Isink current is slower, and the sensitivity of the sensor will increase. Similarly, a decrease in CCPC capacitor will result in a lower sensitivity.

Following the sensor logic depicted in Figure 1, the counter counts the pulses of CUP or CDN respectively. The device only switches its output when the capacitance changes more than 63 times consecutively in one direction. Very slow changes are neutralized. and extremely quick changes don’t register because the device never reaches the required number of changes for a switch. The counter is reset every time the pulse sequence changes from CUP to CDN or vice versa.

Figure 2 shows the typical connections for a general application. 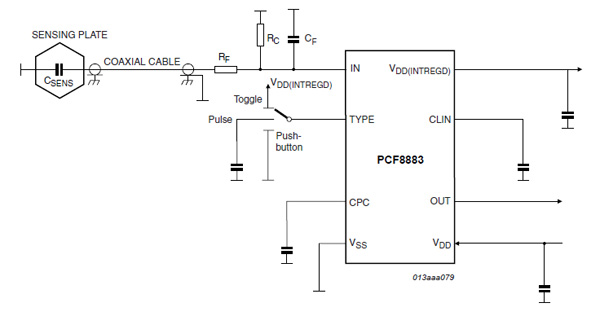 The sensing plate is connected to a coaxial cable, which is in turn connected to the IN pin. (The sensing plate can also be connected directly to the IN pin.) An internal low-pass filter is used to reduce RF interference. For added RF immunity, an additional low-pass filter, consisting of a resistor RF and a capacitor CF, can be added to the input. Resistor RC reduces the discharge time such that the internal timing requirements are fulfilled by assisting the internal current sink. RC is only required for larger sensor capacitances.

Sensitivity and response time are the two primary items to take into account when fine-tuning switch performance. In this next section, we look at these two factors and make recommendations for optimizing the design.

If the sensitivity is increased, the possibility of incorrect switching due to interference from electrical fields also increases. This has a strong influence on the switching characteristics and may be compensated by reducing the sensor area. On the other hand, increasing the sensitivity lets the sensor react at a longer distance, and improves the range through materials with different permittivity.

Approach speed and dynamics
The sensor compensates for changes in static or slowly changing capacitance. As mentioned above, the auto-calibration feature means that the sensor requires more than 63 consecutive increases (or decreases) in capacitance over a fixed period to cause a switch at the output. The first switch occurs when the sensor can no longer compensate the change in capacitance. A triggering object, moving at a constant speed, will cause a greater change in capacitance as it approaches the sensing plate. As the approach speed increases, the required distance from the switch increases as well. If the distance between the sensor plate and the triggering object is larger than the sensor plate area, then a certain amount of fine-tuning may be required.

Area of the sensor plate
The size and form of the sensor plate can be varied to obtain optimal switching behavior or to conform to the size constraints of the application. Oval and round areas are usually best, since they present the fewest edge effects, but there is considerable flexibility in sensor design.

In keyboards, the keys typically have a relatively small surface area. In this case, the sensor area needs to be roughly comparable to the size of a fingertip, and the switch must be fine-tuned such that neighboring switches don't react in error.

Using a bigger triggering object can also increase sensitivity. This may prove useful in certain applications, such as when switching through a thick layer of material where the material itself influences the sensitivity.

Thickness and nature of the dielectric
The dielectric encompasses everything between the sensing area and the triggering object area. The thickness and nature of each dielectric influences the strength and flux of the electrical field passing through. The electrical field will be refracted, diffracted, reflected, or diminished depending on the exact materials used, and on the thickness of the construction.

Materials having higher relative permittivity support higher sensitivity because the electrical field strength is proportional to the relative permittivity, and inverse proportional to the thickness. An example is a sensor area mounted behind 10 mm of glass, a 0.3 mm air gap, and 2 mm of plastic. The air gap is an issue, since its relative permittivity is low compared to the plastic and glass. Therefore, air gaps should be minimized and the thickness of the material should be reduced to a minimum. By placing conductive foam between the sensor plate and the glass, the air gap can be avoided completely.

Plate (electrode) orientation
The more field lines that the triggering object cuts, the larger the generated capacitance change will be. For instance, an approaching palm area triggers a switch faster than the side of the hand. For this reason, it's important to position the sensing plate in a way that makes it easy for the user's natural touch or proximity motion to trigger a change.

The value of the CCLIN capacitance connected on the CLIN pin determines the internal sampling frequency and therefore the reaction time of the switch. Figure 3 shows that smaller values of CCLIN correspond to faster reaction times. 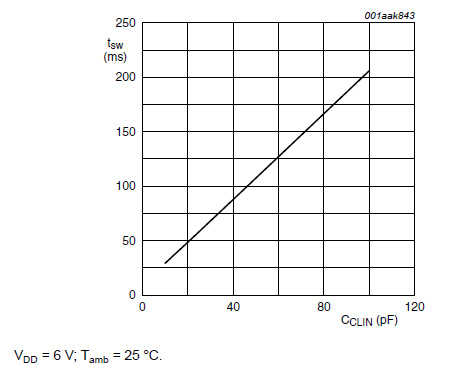 
The sensor reacts more quickly when the frequency is increased, since the necessary number of comparisons is reached in less time. This also means that the sensor self-calibrates to new environments more quickly, with the result that a slow-moving hand will no longer cause the sensor to switch. That is, the sensor calibrates itself to the new environment (with the hand present) more quickly than it detects the changes caused by the approaching hand. Another consequence of increasing the sampling frequency is that the sensor reacts to quick changes at a distance with higher sensitivity. This effect can be enhanced by increasing CCPC or the sensing area.

To get the proper dimension of CCLIN, it's important to know the normal approach speed of the triggering object. For example, a machine may move faster than a human does, and a single finger can often move more quickly than an entire hand.

It's important to keep in mind that increasing the response time (and thereby reducing the switching frequency) reduces power consumption. As shown in Figure 4, the higher sampling frequencies associated with shorter reaction times lead to increased current consumption, and that uses more energy. Depending on the application, the designer has to find the best trade-off between speed and power consumption. 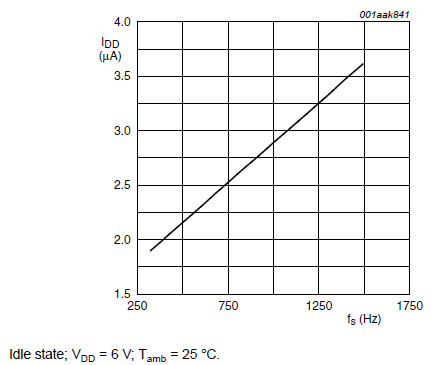 
Other considerations for power consumption 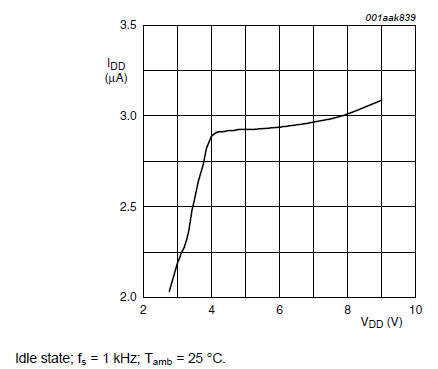 
Figure 6 shows that more power is required to drive the devices at low temperatures. 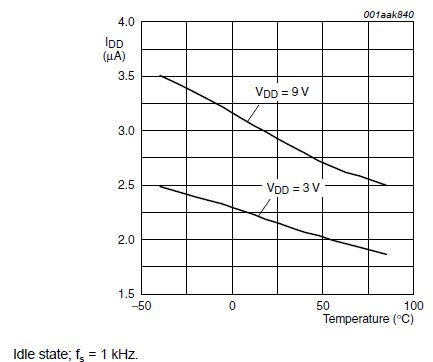 
By enabling human interfaces that can be controlled by proximity or touch, capacitive sensors have the ability to transform the way we interact with electronic systems. Until now, a limiting factor has been reliability, since environmental factors such as humidity, dirt, freezing temperatures, and changes in the moving object can have a negative impact on sensitivity and responsiveness.

NXP Semiconductors, with its PCF8883 capacitive sensor, takes advantage of a patented auto-calibration feature that improves reliability. Designing with auto-calibration requires a certain amount of fine-tuning, since the switch has to be optimized for typical application requirements, but once the initial configuration is set, the sensor offers enhanced performance and longevity. As a result, this auto-calibrating device is expanding the reach of capacitive sensors, and bringing a new level of user friendliness to a wider range of applications.