Today, LED technology represents perhaps the most efficient and viable way to produce light in a variety of applications, ranging from televisions and monitors to kitchen lighting and municipal street lamps.


Today, LED technology represents perhaps the most efficient and viable way to produce light in a variety of applications, ranging from televisions and monitors to kitchen lighting and municipal street lamps. Even so, research aimed at controlling the directional emission of individual photons and producing nanowire-based LEDs may radically improve the efficiency of LED technology and enable new LED applications.

In addition, leading LED manufacturers, such as Cree and OSRAM Opto Semiconductors are continuing to develop more efficient LEDs.

Modern LEDs, as semiconductors, emit light in a single direction, which is an important advantage in many LED applications. For example, a T8 LED tube aimed downward at a 120-degree beam angle is more efficient than a similar T8 fluorescent bulb, which emits two-thirds of its omni-directional light back into a fixture. However, finer control of directional light would improve efficiency in many LED applications and allow for more flexible or shape-dependent applications.

"The direction an LED emits light is mainly determined by the surface between the LED and surrounding air," explains the Foundation for Fundamental Research on Matter (FOM) in a published release. "Because light can only escape an LED at small angles, the direction of emission is usually perpendicular to the surface.”

The complete findings, titled "Controlling the Directional Emission of Light by Periodic Arrays of Heterostructured Semiconductor Nanowires" will be published in a forthcoming edition of the American Chemical Society's ACS Nano.

The FOM researchers grew partially-emitting semiconductor InP—InAsP—InP nanowires (Figure 1) using the vapor-liquid-solid (VLS) method via metal-organic vapor phase epitaxy, which is a chemical vapor deposition method for growing one-dimensional structures with a high degree of precision. Ordered arrays of gold particles are used as the metal catalyst. The surface of the substrate is produced with nanoimprint lithography. 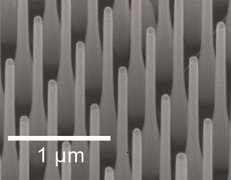 The FOM’s Industrial Partnership Program report focuses on how researchers created nanowire structures and monitored and measured resulting light. We can discern three important findings from the report.

First, the researchers demonstrated the potential viability of relatively large-scale nanowire-structure-based LEDs, which builds upon similar findings from past research on developing single quantum nanowire LEDs.

Second, once a functional nanowire-structure LED is produced, the researchers demonstrated how that structure and the relationship of materials and growth order could affect photoluminescence. Finally, the researchers also described how specific light-emitting nanowire heterostructures could affect directional emission.

These results provide a foundation for designing the emission of nanowire-based LEDs and single-photon sources based on photonic crystals of semiconductor nanowires.

The goal of this research might be to improve the efficiency of LEDs, which are currently top performers among other lighting technology. But the true objective extends beyond research into nanowire structures that will improve the technology long term and yield evolutionary improvements from LED manufacturers.

For example, as FOM produced its report, Cree demonstrated a white LED capable of producing an industry-leading efficacy of 231 lumens per watt. The company reported its achievement resulted from relentless and incremental innovation.

"It wasn’t long ago when 200 lumens per watt was considered the theoretical maximum efficiency for a lighting-class LED," said John Edmond, Cree co-founder and director of advanced optoelectronics, in an official statement. "We broke that barrier in 2010 and now have achieved 231 lumens per watt. The innovation from our labs is the foundation for our industry-leading XLamp LED family and an invention that continues our leadership in the LED lighting revolution."

Together, the incremental improvements that led Cree to produce more efficient LEDs and the revolutionary demonstrations from FOM researchers constitute a tradition of innovation in solid-state lighting that will soon lead to increasingly capable LEDs.