High performance wireless base stations are undergoing radical transformations to help make the high cost of 4G (fourth generation) network deployment more acceptable and effective. While the performance requirements continue to be demanding, with the data rate pushing many times higher than the current 3G networks, equipment designers are faced with a number of challenges:

Hence, the new generation base stations are likely to take on a different look than in the past. The man-sized equipment rack that sits inside an air-conditioned shack at the base of the transmission towers is being replaced by small, weather-sealed boxes commonly referred to as RRHs (Remote Radio Heads) or RRUs (Remote Radio Units). These enclosures are the size of a desktop PC and are designed to mount on the tower top, fully exposed to the elements. Each box is packed with many channels of radio electronics, but lack the baseband modulation or demodulation processor. Instead, the modulated signals are piped in and out through either multi-100 Gbps fiber optic cables, or by point-to-point microwave links. These signals are sent to a single base unit that can be tens of kilometers away, and feed multiple cell towers at a time. This type of base station architecture scales easily and is potentially more economical to deploy.

Another trend for the new generation are multiband-capable, and in many instances, multimode-operational radios. These systems can be easily configured by software to adapt to any carrier’s service requirements, regardless of frequency bands or standards.

The most important goal for any new generation base station is, of course, to deliver a higher data rate to increase capacity. Today’s networks are overloaded as a result of the exponential use of smart phones and portable PCs/tablets. MIMO transceivers help to achieve higher data rates by enabling two or more orthogonal receive channels operating in parallel. Their data bit streams are combined to increase the effective data rate.

The multiple channels also help mitigate wireless receivers that are subject to fading and multipath interference, resulting in performance degradation and data loss. The LTC5569 dual mixer from Linear Technology is designed to provide dual simultaneous receive by configuring each mixer’s LO to be driven from a common input, thus preserving the phase coherency of the two channels. While it is possible to implement the same using two discrete mixers, having both mixers built on a monolithic die provides a far superior and consistent match on a part by part basis. Such a dual mixer provides for a higher degree of signal integrity by allowing it to mate with two physically separate antennas or patch elements. Thus, a good degree of spatial diversity can be accomplished. The two mixers’ internally independent LO buffers provide excellent isolation between the two channels to support concatenating two or more data bit streams into a single, much higher data rate stream.

A smart antenna can be used in a MIMO implementation by beam steering the signal in the same direction of its reception. To accomplish this, two or more receive channels must measure the angle of the incident signal. This necessitates the preservation of the LO phase coherency between the two channels.

The expectation of 4G wireless is not only a much higher data rate than the current 3G, but also a much wider bandwidth. This makes multimode operation possible. The wireless industry is actively pushing the bandwidth requirements upward of 40 to 65 MHz, and in some cases, even as high as 75 MHz. This is not a simple task for the RF engineer, as the gain flatness conditions are tight.

Figure 1 shows an application circuit using an LTC5569 dual mixer as an uplink receiver operating at an LTE TDD band of 2496 to 2690 MHz. Note the overall simplicity of the dual mixer, having very few external components. 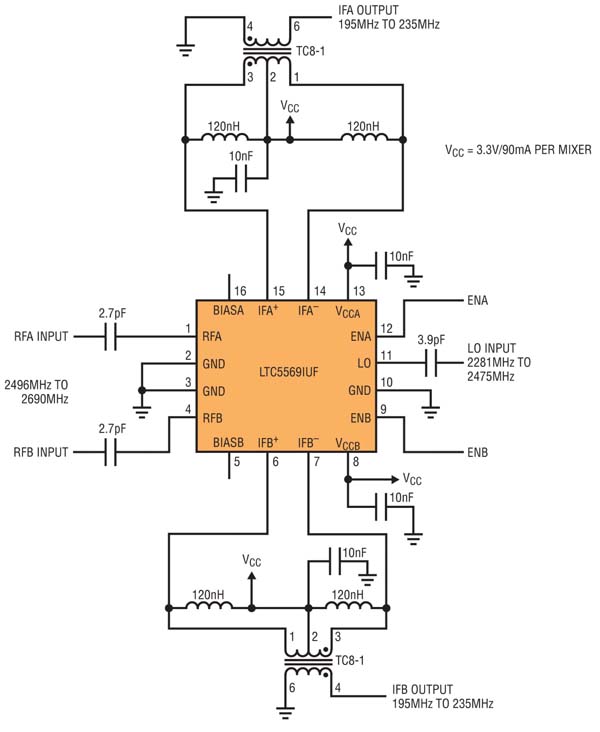 The differential IF outputs use 120 nH pull-up inductors (0603HP series from Coilcraft, 2% tolerance) and an 8:1 impedance ratio IF output transformer (TC8-1+ from Mini-Circuits). This output match provides single-ended, 50 Ohm output impedance to the next stage.

The 120 nH pull-up inductors in parallel with the LTC5569 mixer IF output capacitance (1.3 pF differential) and other parasitics form a wide bandwidth, single-pole bandpass filter at the IF outputs. Each IF output pin conducts 28 mA of DC current from Vcc. The total IF DC current of 56 mA is split between the secondary winding of the TC8-1 IF transformer and the two 120 nH IF output inductors. The junction between the two pull-up inductors and the center tap of the TC8-1 transformer needs a good AC ground. This ground is provided by the 10 nF bypass capacitors.

The same performance was measured for an IF output sweep from 195 to 235 MHz.

When packing many channels of receivers into an ever smaller enclosure, real estate is at a premium. The 4 mm x 4 mm QFN package that the LTC5569 uses normally contains just one mixer. Now it has two mixers, doubling the packing density. Each mixer’s RF input and the common LO input have integrated balun transformers built into the chip so that no external transformers are required for those ports. It is noteworthy that a typical transformer often takes up as much PC board space as the device itself. When two or more channels (example: 4 channels or 8 channels) are used, the seemingly insignificant footprint increase can quickly grow into something unmanageable.

It is noteworthy that the RF balun transformers built on-chip have unique advantages. Since their patterns, thickness of the metallic traces and the dielectric are well controlled as a part of the semiconductor process, they produce consistent impedance behavior that cannot be matched compared with discrete, mechanically wound transformers. Hence, they provide repeatable response characteristics from system to system with minimal variations.

The LTC5569’s RF and LO inputs’ 50 Ohm impedance match also helps to keep the external matching requirements to a minimum. Above 1.4 GHz to 3.3 GHz, the RF and LO input return losses are better than 12 dB. Only a DC blocking capacitor would be required at these ports. Since the LTC5569 is capable of wide frequency operation to as low as 300 MHz, its RF inputs can be easily matched for the 700 MHz LTE and 800 MHz GSM bands.

Additionally, the LTC5569’s high conversion gain of 2 dB helps eliminate the need for an extra IF gain stage. The mixer delivers an outstanding Input IP3 performance of 26.8 dBm (at 190 MHz, IF). Moreover, the mixer has superior blocker handling capability. Its NF only degrades slightly from 11.7 to 17 dB (at 1.95 GHz, RF) with an in-band, 5 dBm blocker signal present at the RF input.

With this power consumption, an eight channel MIMO receiver can be incorporated consuming only 2.4 W. This is far less than an alternative 1 W/channel mixer burning a total of 8 W to accomplish the same.

When the dual mixer is soldered down on a printed circuit board, care should be taken to ensure that the underside exposed center pad is soldered completely. This is important not only to provide the most efficient heat conduction, but is also necessary to achieve optimum RF signal ground contact. This grants improved RF signal to noise performance.

The LTC5569’s package has a very low junction-to-case thermal resistance (ΘJC) of 8°C/W. With both channels operating (600 mW total) and a board temperature of 105°C, the device’s junction temperature is only 110°C, well below the 150°C absolute maximum rating.

The LTC5569 dual mixer delivers outstanding performance over a very wide bandwidth while providing a compact footprint and very low power consumption. This device can rise to the challenges of the next generation LTE MIMO RRU requirements.