Energy from solar panels is used to directly power household appliances, charge batteries or feed electricity directly back to the grid in return for credit against future power bills.

Energy from solar panels is used to directly power household appliances, charge batteries or feed electricity directly back to the grid in return for credit against future power bills. These applications require AC voltage, so the DC voltage from the panels needs to be converted to make it useful.

A popular and efficient technique for converting the solar panel output to more practical AC voltage is a solar inverter topology using insulated-gate bipolar transistors (IGBTs). IGBTs are particularly suited to this type of rugged application.

This article describes a solar inverter using IGBTs and highlights the key characteristics of the components that need to be considered in order to design the most efficient conversion circuit. Product examples of IGBTs from International Rectifier, Fairchild, Infineon, and IXYS are also described to help clarify the issues.

Anatomy of an IGBT

IGBTs exhibit metal oxide semiconductor (MOS) input characteristics and the bipolar output characteristic of a voltage-controlled bipolar device. However, because the IGBT is essentially a bipolar device it can handle higher current than a MOS field effect transistor (MOSFET). Figure 1 shows a schematic of a basic type of IGBT and its equivalent circuit. 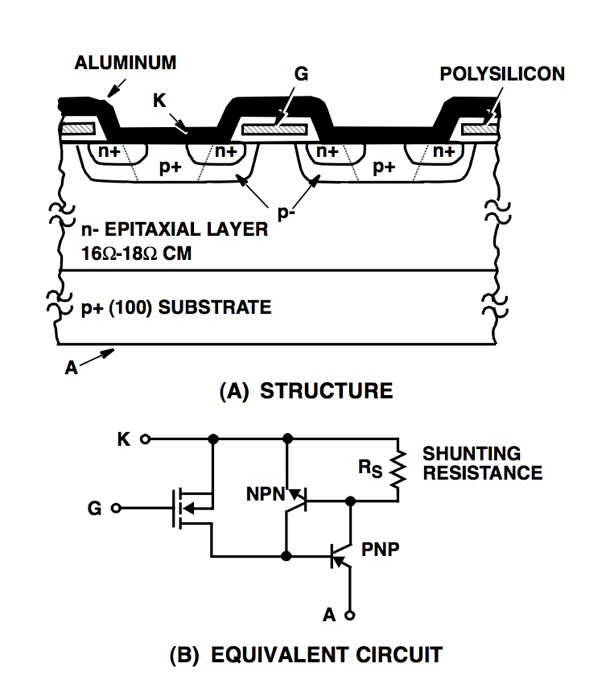 IGBTs have some key advantages over MOSFETs and bipolar transistors. First, IGBTs have very low on-state voltage drops due to conductivity modulation, in addition to superior on-state current density. These factors allow manufacturers to fabricate devices with smaller chip size and at lower cost.

Second, IGBTs boast low driving power and simple driving circuits due to the input MOS gate structure. The devices are simple to control compared to current controlled devices such as bipolar transistors. Third, the devices have excellent forward and reverse blocking capabilities. These two characteristics encourage designers to select IGBTs for high-current and high-voltage applications.

One drawback of first- and second-generation IGBTs was a slower switching speed than power MOSFETs (although the switching speed was still faster than bipolar devices). This disadvantage is a result of the IGBTs’ minority-carrier architecture (i.e., both electrons and holes contribute to current), whereby collector current “tailing” causes the turn-off speed to be relatively slow.

However, advances in process technology have addressed slow switching speeds while still keeping conduction losses comparatively low. For example, while early IGBTs required as much as 2 ms to turn off, modern “ultrafast” IGBTs are much quicker to react. Modern trench IGBTs, for example, can have a turn-off time in the 40 to 75-ns range (depending on collector current (IC) and junction temperature).

(Higher speed switching has allowed IGBTs to compete in applications where MOSFETs were previously dominant, for example, for switch mode power supplies (SMPS) that operate at 100 kHz and faster. Previously, switching losses limited IGBTs to SMPSs operating around 50 kHz.)

Despite the performance improvements brought about by process improvements, IGBTs still face a tradeoff between turn-off time (hence switching speed) and on-state voltage drop (VCE(on)). Figure 2 illustrates the relationship. Because both switching and conduction losses contribute to power dissipation (and efficiency) designers need to take this tradeoff into account when selecting IGBTs for a particular application. 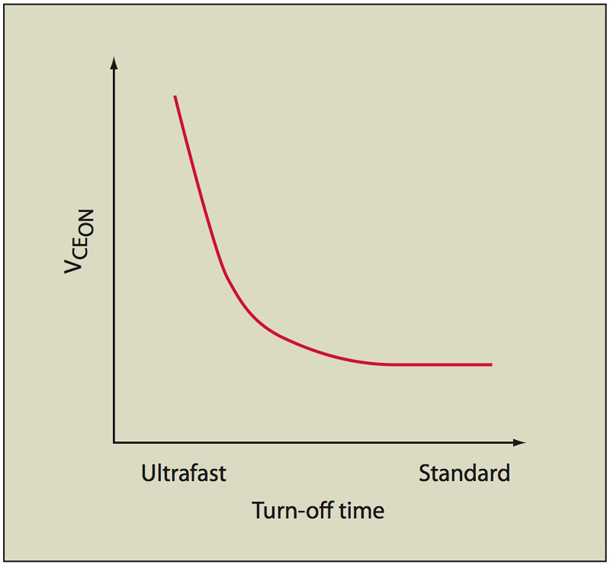 There are several ways to implement a solar inverter circuit, but a typical implementation uses the full-bridge IGBT topology shown in Figure 3. In this circuit, the output from the solar panel is connected to high- and low-side IGBTs and then through an output filter (formed by L1, L2, and C1) to produce a single-phase sinusoidal waveform. 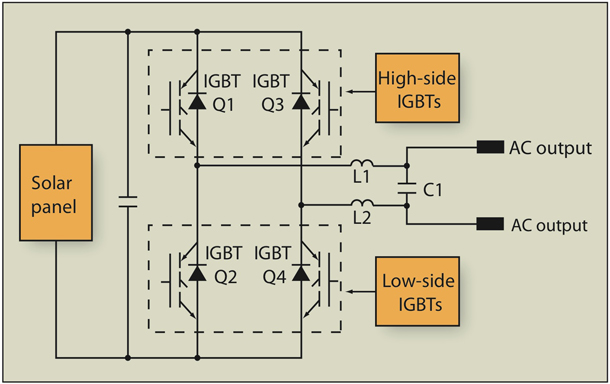 Figure 3: Turn-off time for an IGBT is a function of its collector-emitter voltage (VCE). (Image courtesy of International Rectifier)

To demonstrate the importance of selecting the correct IGBT for the job, consider an application where the DC voltage from the solar panel contributes to the electricity grid. In this case, the solar inverter circuit must produce a good quality AC sinusoidal voltage waveform of an appropriate power factor that will not cause problems when it is directly connected to the mains.

One approach is to pulse width modulate the IGBTs on the high side at a frequency above 20 kHz to produce the 50 or 60 Hz output required for mains connection while commutating the opposite low-side IGBTs at 50 or 60 Hz. A key question for the designer is how to choose the IGBTs to achieve the lowest possible power dissipation in the circuit and hence gain the most efficient DC/AC conversion.

The total power dissipation of an IGBT is due to a combination of switching losses and conduction losses. At high switching speeds the former outweighs the latter.

In the sample solar inverter circuit, the high-side IGBTs are being switched at 20 kHz, so the designer should consider faster switching products. Although such IGBTs exhibit higher conduction losses than standard speed devices the lower switching losses more than compensate. International Rectifier’s standard planar IGBT (with a turn-off time of 700 ns), dissipates 23 W in this application; but the ultrafast trench device (40 ns) dissipates just 7 W.

In contrast, because the low-side IGBTs are switching at 60 Hz, conduction losses become far more significant than switching losses. In this case, the better conducting standard planar device (with a VCE(on) of 1.2 V) dissipates just 6 W, while the ultrafast trench IGBT (1.6 V) dissipates 8 W.

While designers must choose carefully when trading off conduction losses against switching losses, there are plenty of options.

As we’ve already seen in the example above, International Rectifier has a wide range of IGBTs available (see Figure 4) and includes a handy IGBT selection tool on its website. Other suppliers have similarly comprehensive ranges. 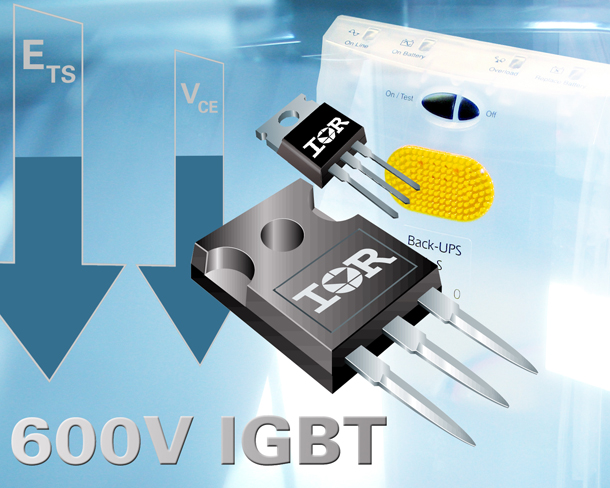 Fairchild Semiconductor includes the FGAF40N60UFTU IGBT in its product portfolio. This device has a typical VCEon of 2.3 V (at a IC of 20 A) and a switch-off time of around 65 ns. The IGBT is able to dissipate 100 W (at 25°C). The company says this product is a good choice for inverters where high speed switching is important.

Infineon’s TrenchStop IGBTs include the IKW15N120T2 that can handle up to 1200 V and dissipate 235 W (at 25°C). The device has a typical VCE(on) of 1.7 V (at an IC of 15 A) and a switch-off time of around 362 ns. The company advises that this IGBT is a rugged device for applications such as frequency converters and uninterrupted power supplies.

And IXYS offers a comprehensive range of IGBTs, including its GenX3 family. The family includes the IXGH100N30C3 that’s capable of handling up to 300 V and dissipating 460 W (at 25°C). The device has a typical VCEon of 1.53 V (at an IC of 100 A) and a switch-off time of around 160 ns. IXYS claims that the GenX3 family is a good choice for converters, inverters, and AC motor speed control among other applications.