Irrespective of the type of solar PV inverter system under consideration - whether it be a central-inverter based system, or whether it employs distributed micro-inverters - implementing isolation will be necessary.


Irrespective of the type of solar PV inverter system under consideration—whether it be a central-inverter based system, or whether it employs distributed micro-inverters, or perhaps it is one of the new DC-Optimizers which borrow from both types—implementing isolation will be necessary. This is inevitable given that various portions of the system operate at very different DC and AC levels. There are also regulatory issues which demand minimum electrical isolation barriers be met for safety reasons.

Given their widespread availability and functionality, optocouplers have traditionally been used to provide the isolation. However, the use of optocouplers in this application has given rise to concerns due to their well-known deficiencies; most notably, the degradation in Current Transfer Ratio (CTR) over the operating life of the equipment. To mitigate against CTR degradation, optocoupler circuits are normally designed to be heavily overdriven which brings its own set of problems, including heat dissipation and burn-out. Even with an over-driving regime in place, it is questionable whether the devices will last the standard 20-year lifetime that many such inverters offer.

Analog Devices’ digital isolators with iCoupler® technology enable designers to implement isolation in designs without the cost, size, power, performance, and reliability constraints found with optocouplers. With more than half a billion channels shipped into the field, these magnetically isolated products are a safe, reliable and easy-to-use alternative to optocouplers. Furthermore, the technology allows isolated power to be incorporated in addition to the digital signal isolation functionality. In an inverter, isolated power can be utilized to offer complete isolated gate driver products with low power consumption and tight timing characteristics across all conditions. In contrast, the optocoupler-based gate drivers are very power hungry and also suffer from large variations in the gate driver timing specifications.

The advantages of iCoupler digital isolators include: 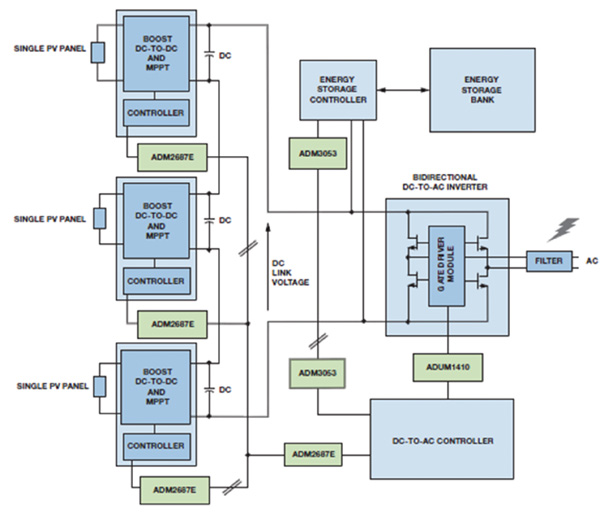 Figure 1 shows the typical boundaries where isolation is usually found in a DC Optimizer system which connects the output voltages of the Optimizers in series to form a high value DC link voltage for the central inverter. Each panel communicates status and control information via an isolated RS-485 transceiver with embedded isolated power, such as the ADM2687E. The DC/AC gate driver module can be driven with a quad-channel digital isolator, the ADuM1410, but, as mentioned previously, the iCoupler technology can be integrated with on-chip DC/DC converters to provide isolated power for the gate drivers. Also shown is an Energy Storage bank where unneeded generated energy can be stored for use at a later time. The inverter controller and the storage controller communicate with each other via an isolated CAN interface enabled by the ADM3053 which is a 2.5 kV rms signal and power isolated CAN physical layer transceiver.