Despite slow growth in 2011, the IC market will rebound over the next several years because of smart phones, media tablets, and automotive systems. 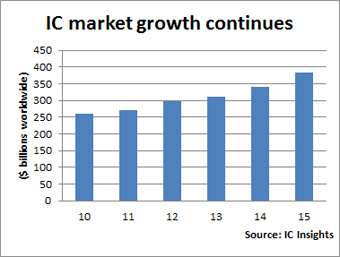 The rebound in growth means that the long-term growth trend for the IC industry is continuing. To put this in perspective, the IC market hit $10 billion in 1980 and topped $100 billion in sales in 1995. It reached $200 billion for the first time in 2005, according to IC Insights.

IC unit shipments will reach 200 billion for the first time in 2011. Shipments of analog devices are forecast to surpass 100 billion units in 2011. This is the first time any product segment has reached that level.

Total smart phone shipments are forecast to grow 60 percent in 2011 to 440 million units after increasing 56 percent to 275 million in 2010, IC Insights reported. This is significant to the IC industry because smart phones contain as much as nine times more NAND flash than a basic or enhanced cell phone.

The popularity of touch-screen media tablets has impacted the portable computer segment with microprocessor giant Intel and rival Advanced Micro Devices scrambling to compete with ARM-based processors in tablets. ARM processors were used in well over 90 percent of the 17 million tablets sold by all systems suppliers in 2010, and nearly that same share is expected in 2011, according to IC Insights.