The researcher has downgraded its chip industry revenue forecast from ten percent because of economic uncertainty. 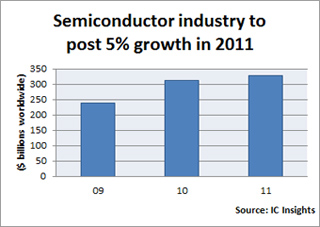 The global semiconductor industry will grow five percent $329.3 billion in 2011.Semiconductor industry growth in 2011 will be softer than originally forecast because of weaker gross domestic product (GDP) growth, high oil prices, and overall economic uncertainty in the first half of the year, according researcher IC Insights’ mid-year update.

The primary cause for the downgrade was overall weak performance of the global economy in the first half of the year. The earthquake in Japan, higher oil prices, the debt crisis in United States and Europe, and natural disasters in the U.S. all took their toll on the economy and impacted the chip industry, according to IC Insights.

While any one of the negative events may not have had a serious impact, the combination of circumstances has slowed the worldwide economy in the first half of this year.

Currently, the debt ceiling issue in the U.S. has not been resolved and the European debt crises are ongoing, although some progress had been made with regard to the financial situation of Greece.

The U.S. debt ceiling and European debt crises are likely to be addressed without creating a worldwide financial meltdown, according to IC Insights. However, both of these situations created uncertainty throughout the world, affecting businesses and consumers. Uncertainty is not conducive to good economic growth.

IC Insights’ current forecast assumes that these issues will be resolved and that neither will cause a serious negative financial situation for the worldwide economy in the second half of 2011.

Although worldwide GDP growth in the second half of 2011 is not forecast to revert back to the levels registered in the first three quarters of 2010, it is expected to show noticeable improvement over the first half of this year.

Earlier in the month, the Semiconductor Industry Association (SIA) reported that industry revenue would grow 5.4 percent in 2011. That was an upgrade of the SIA's earlier forecast of 4.5 percent.