Switching DC/DC converters (Regulators have become popular because they are highly efficient and able to step-up (boost), step-down (buck), and invert voltages with ease.


Switching DC/DC converters (“regulators”) have become popular because they are highly efficient and able to step-up (boost), step-down (buck), and invert voltages with ease. However, voltage and current ripples generated by high frequency operation can cause operational problems with sensitive chips and electromagnetic interference (EMI) hassles.

One answer is to spend a lot of time and resources ‘tuning’ the PCB design to minimize parasitic inductances and capacitances, and design time consuming filter circuits to minimize voltage and current ripples. Another is to enlist the venerable linear regulator to work in tandem with the switching converter to smooth the output of the latter and provide a stable, reliable voltage output.

This latter technique requires careful design and considered component selection to get the two regulators working in harmony and eliminate those post-regulation filters. This article describes the benefits of a “hybrid” voltage regulator approach, recommends component selection criteria, and describes a low-noise analog power supply example from Texas Instruments.

Best of both worlds

Switching regulators have become popular because they are efficient and flexible. But there is a trade-off. The chips are more expensive, take-up more space, have a relatively slow transient response to load variances, and, because of the switching operation, it can be difficult to prevent electromagnetic interference (EMI) and minimize voltage and current ripples in the output voltage.

In contrast, linear regulators do not rely on switching technology and consequently generate a ripple-free, low-noise, and stable output. The devices are cheap, compact, and relatively simple to integrate into a design. Moreover, devices such as Linear Technology’s LT3022, a very low dropout (LDO) linear regulator, boasts a drop out voltage (the minimum differential between input and output voltage) of 145 mV (1 A full load) and fast transient response. (See the TechZone article “High Efficiency, Low Voltage Conversion with Single Supply Operation from an LDO Regulator”).

Unfortunately, linear regulators are not particularly efficient unless the difference between input- and output-voltage is small, and they can only be used to step down a voltage.

Tempted by combining the benefits and mitigating the drawbacks of both voltage regulators, some enterprising engineers have created hybrid topologies by linking a switching regulator with one or more linear regulators for a flexible, low-noise power supply.

The switching regulator can accept a wide range of input voltages and efficiently regulates to a higher, lower, or inverted supply. And if the output of the switching device (i.e., input to the linear regulator) is set such that it is only slightly greater than the required output of the linear regulator, the latter can operate in its most efficient range. An additional benefit is that power dissipation is lower and thermal management is eased.

With careful selection, the linear regulator will “clean up” the switcher’s ripple-affected regulated output, eliminating potential EMI issues and obviating the requirement to spend long hours refining the PCB design and calculating the inductor and capacitor values for output filter circuits. Other benefits include a power supply with improved stability, greater accuracy, faster transient response, and lowered output impedance.

The hybrid power supply is likely to take up more space and cost more than a solution comprising just one regulator, but for many applications featuring sensitive analog circuits, the trade-off is well worth consideration. That being said, things are a little more complicated than just selecting two regulators and linking them together.

Engineers favor hybrid designs because the flexibility of the switching device complements the noise-free output of the linear regulator. This is a particular advantage in regulating the voltage for precision analog circuits such as analog-to-digital converters (ADC), digital-to-analog converters (DAC), and bipolar amplifiers. It is an ongoing design challenge to generate clean and stable positive and negative voltage rails for powering these noise-sensitive analog components.¹

It is possible to compensate for this to some extent with careful choice of switching regulator. First, the designer is recommended to choose a device with a higher switching frequency than may have previously been considered (remembering that a good linear regulator should deal with the troublesome voltage ripples that plague faster devices). The higher frequency switching regulator will be more efficient with the added benefit that external filter components, particularly the inductor, can be smaller. (See the TechZone article “Design Trade-offs in Integrating an Inductor into a Power Module”) A chip such as Linear Technology’s LTM4601 is a good example of a wide-input-range, high-frequency switching regulator.

Dealing with ripple and spikes

A conceptual linear regulator driven from a switching regulator output is shown in Figure 1. The input filter capacitor is intended to smooth the ripple and spikes (Figure 2) before they reach the regulator. The output capacitor helps maintain low output impedance at higher frequencies, improves load transient response, and supplies frequency compensation for some regulators.²

The filter capacitors can only do so much, however. While they are reasonably effective at reducing some ripple, voltage spikes are another matter. The problem is the parasitic inductance and resistance of the capacitor that compromise its effectiveness, especially at higher frequencies.

To maximize the advantages of combining a switching regulator with a linear regulator, it is important to ensure that the device itself is able to “reject” as many of the ripples and spikes as possible to assist the filtering of the external capacitors and improve the system. 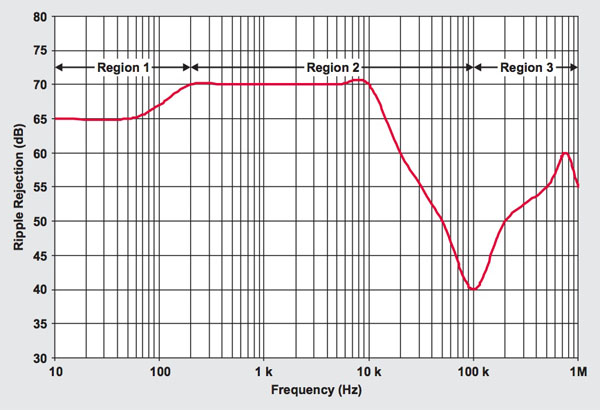 The linear regulator’s PSSR is expressed in decibels and is defined as:

When designing a hybrid power supply, the designer is advised to select a linear regulator with a good PSSR. Otherwise the output of the linear regulator will not be as smooth as desired. Devices such as Texas Instruments’ TPS793/4/5/6xx family or the low-Iq TPS799xx family are good examples of high PSSR power supplies.

A design recommendation to maximize the power supply’s PSSR is to use a low-ESR ceramic output capacitor and determine its capacitance value based on the frequencies to which the LDO linear regulator is most likely to be subjected. Finally, it is never a bad idea for the designer to minimize the PCB’s parasitics to reduce the feedthrough from input to output.

An application circuit¹ for a hybrid power supply (Figure 4) is shown below using a Texas Instruments TPS54060 switching regulator in buck mode supplying positive and negative 18 V inputs to a TPS7A49 LDO linear regulator (positive) and a similar device, the TPS7A30 (negative). 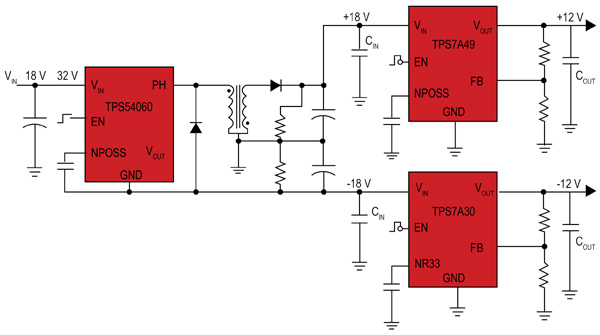 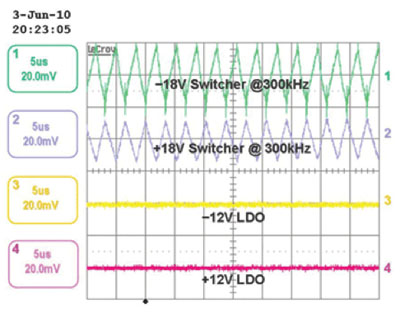 Sensitive analog circuitry demands a noise-free power supply to operate to specification. Excessive noise from a power supply increases the signal-to-noise ratio (SNR), which can interfere with circuits such a ADCs and DACs. For example, a 16-bit data converter can behave like a 14-bit data converter if the SNR is detrimentally affected.

Linear regulators are the best choice for a noise-free supply, but bring limitations such as lack of flexibility, narrow input voltage range, and high power dissipation. Switching regulators address these disadvantages but generate too much unwanted noise.

A hybrid supply promises to combine the benefits of both, but the designer should make a careful choice of regulators, because hasty component selection may introduce more problems than it solves.