How to Select the Right Touch Sensing Approach for Your Design

Consumers increasingly use touch screen displays, monitors, and appliances for many everyday tasks. Touch screen devices provide users with a direct, quick, and easy way to interact with a computer behind a display.


Consumers increasingly use touch screen displays, monitors, and appliances for many everyday tasks. Touch screen devices provide users with a direct, quick, and easy way to interact with a computer behind a display. OEM designers have many choices of touch screen devices and touch-sensing approaches when designing a device. Each method has advantages and disadvantages, and none fits all applications. Examining each of the most common design approaches can help OEM designers better understand which approach best suits each application.

The two most common touch-sensing technologies are capacitive and resistive, and they comprise the majority of today’s touch-sensing panel applications. Others include surface acoustic wave (SAW), infra-red (IR), optical, acoustic, voltage, and electro-magnetic resonance.

Capacitive touch screens generally consist of an insulator, such as glass, coated with a transparent conductor material, such as indium-tin-oxide (ITO). The human body is an electrical conductor, so touching the panel's surface with a finger causes distortion of the screen's electrostatic field and is measured as a capacitance change. Different methods are used to determine the touch's location, including voltage and frequency measurements. The sensor's output is sent to a microcontroller for processing (See Figure 1).

Figure 1: Capacitive touch screens generally consist of an insulator, such as glass, coated with a transparent conductor material, such as indium-tin-oxide (ITO). Touching the panel's surface with a finger distorts the screen's electrostatic field and is measured as a capacitance change. (Source: Cypress Semiconductor Inc.)

Stray capacitance anywhere between 10 pF and 10 nF result in problems for capacitive touch sensors. To overcome capacitance problems, designers can hold it relatively constant by shielding the high-impedance measured capacitance value and connecting the shield to ground. Designers should also remember to keep sensing electronics as close as possible to the sensing spot to minimize the effects of stray capacitance. Electrical interference and moisture can also hamper capacitive touch sensing performance. Any conductive or metallic housing material must be kept several millimeters away from the sensor.

Designers can minimize noise by using voltage-based signal acquisition for touch panels that are powered by a line voltage. Designers can also use battery powered panels because they can use voltage and frequency solutions, since low power is always a major concern.

In comparison, resistive touch sensors are more cost effective to manufacture because they have simpler structures and offer a higher degree of accuracy. They are also the most widely used touch sensing technology and can be used with a stylus, which is important for handwriting recognition and writing Asian characters. Resistive touch sensors consist of several layers of plastic. Like capacitive touch sensors, they use an ITO layer as a conductor.

A resistive touch sensor reacts to a finger's touch, or a stylus, that exerts external pressure to create an electrical contact. Resistive Touch Systems (RTS), such as those from Bergquist, typically consist of a seamless layer of transparent conductors sitting atop a glass panel (See Figure 2). The top layer features a conductive bar on its bottom and the facing bottom layer has a conductive bar on its top.

Figure 2: A resistive touch panel consists of a seamless layer of transparent conductors sitting atop a glass panel. The pictured analog resistive touch screen, a Resistive Touch System from Bergquist, has a seamless one-piece face that is easy to clean with no cracks, crevices or ledges for dirt and grime to accumulate. (Source: Bergquist)

Resistive touch sensing uses a four-wire approach. Two wires for each of the X and Y axes are placed at opposite ends of the touch-panel's area to create a uniform voltage gradient. The microcontroller determines the touch's coordinate position when contact is made by measuring a voltage that corresponds directly to the distance to the sensor's edge.

Other disadvantages of resistive touch technology include that the top flexible ITO layer has only 75 to 80 percent clarity, and the resistive touch screen process has several potential error sources. If the ITO layers are not uniform, the resistance will not vary in a linear fashion across the sensing area. Some applications require measuring voltage to one-bit and 12-bit precision, which is challenging in many environments.

Due to the passive design of resistive touch sensing, when taking handwritten notes with a mechanical stylus, a user cannot press a hand down on the screen while writing. This is the tradeoff between having a dedicated stylus versus using a finger as a stylus. Designers can avoid this problem by deactivating recognition for non-stylus inputs when the stylus makes contact.

Alternative touch screen technologies are available for users who must grip the active portion of the screen or set an entire hand on the screen. These include an active touch screen in which only the stylus creates an input signal, and touches from the hand are rejected.

Newer multi-touch resistive sensing solutions are now available to support the touch of several fingers. These solutions also work with bare or gloved fingers and any input device. Many allow for two-finger gesture and palm rejection.

Multi-touch input is widely available for projected capacitive type sensing in devices such as iPods and iPhones. Many touch sensor and microcontroller manufacturers offer development kits to expedite the design of multi-touch systems.

Recent developments in optoelectronic multi-touch sensing are beginning to bridge the gap between their use in smaller-screen devices, such as mobile phones, and larger-size screens on desktop computers. Designers are still refining optoelectronic multi-touch sensing for larger-screen devices to alleviate negative effects including ambient lighting noise and display integration.

A typical implementation of an optical touch screen consists of optical sensors at two corners of the touch-panel screen. A uniform field of IR light is distributed across the screen by illuminated or reflected borders on the opposing three sides. When the screen is touched by an object, the object blocks the light seen by the cameras. This information is then analyzed by a microcontroller and calculates the touch location using triangulation.

This technology is growing because it offers scalability, versatility, ruggedness, and affordability-- especially for larger-size panels in multi-user professional digital signage applications.

Designers should consider many factors when selecting the right touch sensing technology for a specific application. These factors include the size of the touch panel, the environment in which it operates, the panel's life cycle, its frequency of use, and the necessary flexibility to add new features via software configurability to meet changing user demands.

Lower-cost touch screen technologies such as resistive and some capacitive approaches may not always be the correct solution for certain outdoor applications with specific design requirements for resistance to accidental damage or liquid spills. Some touch sensing technologies such as IR, optical and SAW, require bezel structures around the perimeter of the panel to house receivers and transducers. These structures may negatively impact an end product's aesthetics and also act as a source for dust and grease to accumulate in bezel recesses, impairing operation over time. Sudden shocks or sustained vibrations can also cause misalignment of sensor elements.

Some projected capacitive sensing systems feature a fully protected touch sensor within or behind a protective overlay. And some use a matrix of copper capacitors arranged into an X-Y grid and embedded into a laminated glass or polycarbonate substrate. 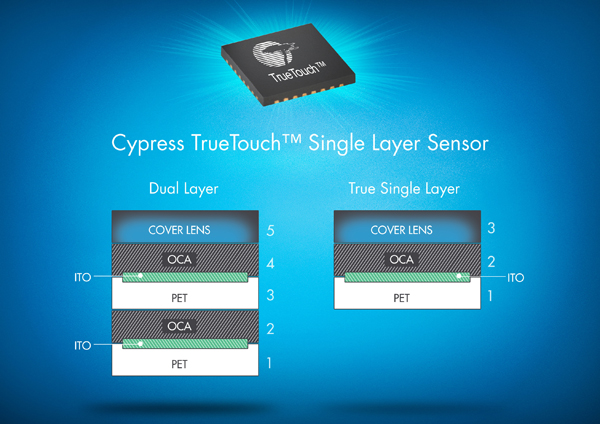 Recent developments point to the use of faster-response microcontrollers to allow the hybrid use of capacitive and resistive touch sensing. This would provide users with the best of both worlds.