How to Properly Operate Power Supply Modules in Series and Parallel


Designers are often challenged with designing a power supply for fairly high current demands. Examples include systems with multiple microprocessors, parallel processing or multiple ASICs that typically need high currents at low voltages to power the core and I/O.

This article helps designers understand common advantages for configuring modules in parallel or in series instead of simply selecting a larger single module. It also discusses factors affecting a power module’s ability to allow parallel or series connections for a reliable design.

To design in parallel or not

One of the primary reasons to parallel power modules is to increase the current and power output capability above the level that a single module can safely supply. The second most common reason to parallel is redundancy. This is often done in high-reliability or mission-critical systems such as military or medical applications where failure will not affect the entire system when power modules are designed in parallel.

There are other reasons for paralleling, such as tight printed circuit (PC) card spacing or other system height limitations. Using two or more lower power modules may help reduce the height of the design. A designer may also want to distribute the thermal heat load over a larger PC board area.

A final reason is to reduce the number of different modules kept in stock by paralleling the same modules for different current and power needs across many program designs. This may also provide a lower cost advantage by earning higher quantity pricing discounts.

However, not all modules can be paralleled. Designers should avoid this method if a manufacturer’s datasheet or application note does not show how to execute it. Since modules with the same part number will have slightly different output voltages, the converter with the highest voltage will naturally source the most current and may be forced into its current limiting mode. The module may even lock up or shut down if it has a shutdown current limit or fold-back architecture. The reliability of an individual module might also be compromised since it may operate at full load if it has a constant-current design for overcurrent situations.

Modules that are properly designed to allow paralleling typically use one of two current-sharing techniques to prevent a converter from overloading including: Board layout

Designers should pay special attention to board layout for a parallel application. Analyze the amount of board space, the number of layers necessary for best performance and the amount of copper, which depends on the currents that will be generated. The designer should carefully lay out module placement and orientation to keep interconnection pins as clean and short as possible to ensure maximum efficiency.

The power planes, VIN, VOUT, and GROUND, must be routed to the power pins with adequate amount of copper for a low-impedance path. Keep the runs tight, wide and short.

Preventing the VIN plane from running above or below the VOUT plane minimizes switching noise. If SENSE+ and SENSE- pins are used, designers should route them to the load as directly as possible while keeping them closely coupled. Keep traces as isolated as possible from other runs to prevent switching noise. Designers can consider connecting each of these lines in series with a 1- to 2-Ω surface-mount resistor in the path to assist in filtering.

Typical guidelines are for an eight-layer PC board with two ounces of copper. This is recommended for best thermal conduction. Designers can use increased copper thickness as current increases, but it is best to consult a thermal expert. Increased air flow is also strongly recommended to help the copper remove heat most efficiently and increase system reliability.

When using multiple paralleled modules with two or more phases, designers must ensure slave modules are synchronized to the frequency of the master. The Texas Instruments (TI) PTH08T250 module is a two-phase device and each phase operates 180 degrees out of phase. Placing two modules in parallel creates a four-phase operation by shifting the slave module phases by 90 degrees (See Figure 1). All slave modules operate in phase and 90 degrees out of phase with the master. However, driving the master with an external frequency via SmartSync (See PTH08T250 datasheet) eliminates the 90- degree phase shift. 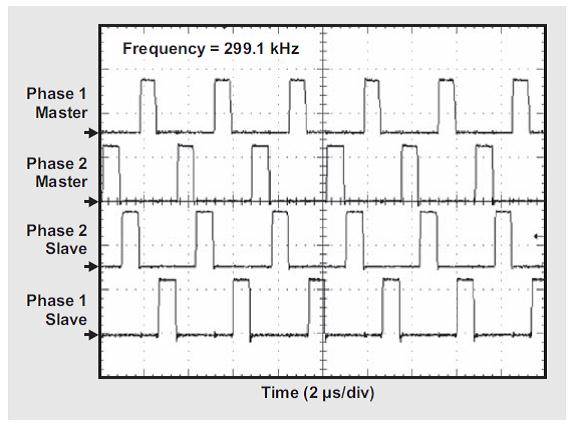 Texas Instruments offers the PTH08T250 series, which can be used for low supply voltages at high DC currents approaching 100 A or more. This dual-phase power module contains TI’s TPS40140 stackable-controller feature that allows multiple modules to be paralleled.

Emerson has its DS650DC-3/DS850DC-3 series that has active current-sharing capabilities.

Designers have another option for modules that have no current-sharing capabilities – using an external current or voltage adjustment. IC load sharing solutions, such as the TI/Unitrode UC3902 will adjust module output current to a level proportional to the voltage on a share bus to achieve current sharing.

This design approach is less common than the parallel option but is effective in applications where a designer needs to generate an output voltage not available in the standard product offering. However, be aware that the output current will be limited to that of the stacked module with the lowest current rating. This method can also allow for multiple usage of the same part number to help streamline stocking and reduce costs.

Designers should consider that ramp-up of the input voltage should be sufficiently fast, or usually less than 250 ms, to avoid one module feeding a DC voltage through another module that is offline and inhibiting module start-up.

Designers can avoid this situation by using a pin on the module to hold it in the off state until the input voltage is within the module’s specification. This pin is sometimes labeled INHIBIT, or RC for remote control, and can enable all converters simultaneously to cause the output voltages to rise equally and eliminate the potential problem.

It is sometimes necessary to use a back-biased diode across the output of each power module with dual outputs. To find out, check the manufacturer’s datasheet. (See Figure 2) 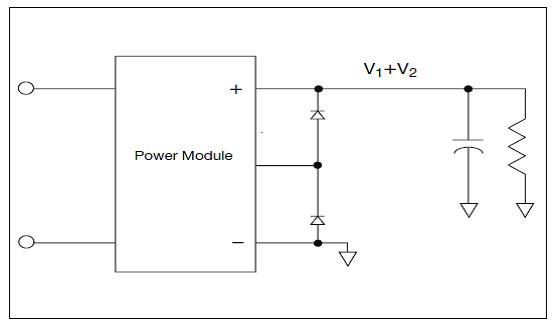 Proper sound layout, thermal and reliability analyses, along with the guidelines in this article, will ensure more robust design architecture for power supply design projects.