Home » Media Library » Articles Library » How to Attach a Heatsink on a SPM&#174; 5 Package

How to Attach a Heatsink on a SPM® 5 Package

See four different methods of attaching a heatsink on to a SPM 5 package.


Motion SPM®5 products have various power ratings from 10 W to 100 W, and are targeted for applications such as small power motor drives which include small power fan motors, dishwashers, and circulation pumps. These products include a bootstrap diode, undervoltage lockout (UVLO) protection function and thermal sensing function of HVIC. Motion SPM®5 products have lower stand-by current which is desired for small power motor-drive applications. There are already a large number of customers adopting Motion SPM®5 into their products thanks to these nice features, but some customers want to attach a heatsink to increase the power rating of the drive. Low-power applications usually do not use heatsinks for heat dissipation even though the chassis of the motor sometimes is used as a heatsink. For example, a 100 W module can be extended to 150 W using a heatsink. (DUT: FSB50550A, Operating Conditions: VDC = 300 V, VCC = 15 V, FSW = 5 kHz, Sinusoidal PWM, TAmb. = 54℃, THeatsink = 100℃, Heatsink Size (DxWxH): 40 x 24 x 15 mm. Results will vary with choice of heatsink and thermal adhesive used.)


B. Direct assemble with PCB by screw (1)

Method B is to use screws to attach the SPM®5 package to the heatsink. This method is stable against external vibration, which may be common in motor applications. Users have to be careful not to bend PCB when assembling the heatsink to the package. If the bolt is tightened too strong, it can cause cold solder or solder crack of components soldered around mounting holes.

Method C is an improved version of Method B. The key is the shape of the heatsink to prevent PCB bending. This method can reduce the possibility of cold solder owing to PCB bending, but needs more PCB space. The gap between the heatsink and the SPM®5 package should be filled by a thermal conductivity pad or thermal grease.

Method D utilizes the unique shape of the package. As shown with the green dotted line in Figure 4, the SPM®5 package has a trench at the bottom center of the package. A clip can be designed so that the package can be assembled to the heatsink by this clip. 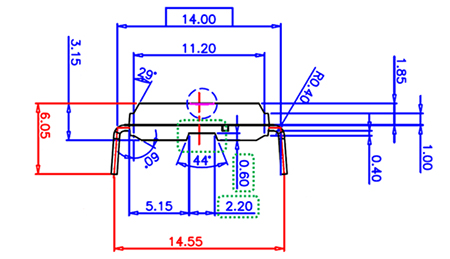 In applying this method, important things are the shape and material of the clip. In order to hold the package tight and stable, the clip has to have tension over a certain level. The width and thickness of the clip should not exceed the size of trench in the SPM 5 package. Figure 6-d is an example drawing of a clip. Method D has merit on mass production when comparing to other methods. Additionally, Method D can lead to increased productivity (throughput) because the user can assemble the SPM to the heatsink before the PCB assembly process. 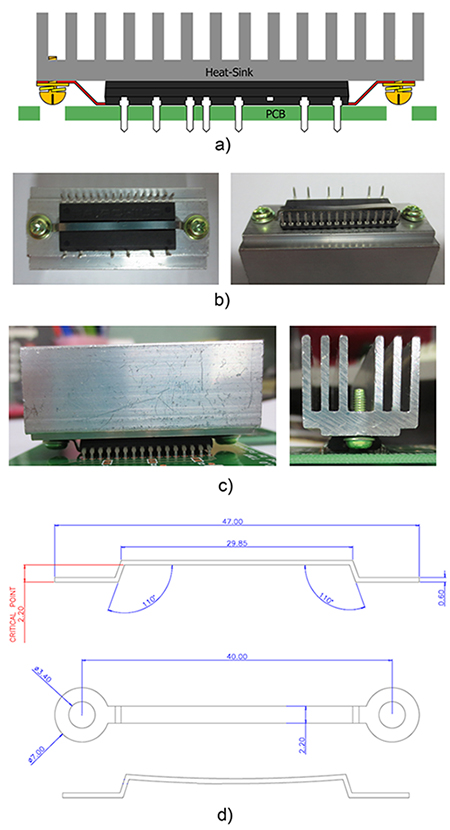 Some heatsink attachment methods described here have been adopted by some users. In order to apply these methods in real applications, however, we have to consider many things based on different operating conditions in each application. For example, customers may not apply Method A in applications with severe vibration because the heatsink could be detached from the package. Customers should be verifying reliability through vibration testing to apply Method A or B. Also, a thermal conductivity adhesive dispenser can be considered to improve productivity when using Method A. The methods described in this article are meant to demonstrate some basic concepts, and customers have to validate the effectiveness and reliability before applying these methods in real production.