How Thermal Foldback Improves the Reliability of LED Lighting Fixtures

Electrical and thermal conditions are two major factors affecting device life and lighting output and, while long life is a key benefit of LEDs, all bets are off if the LEDs exceed their temperature ratings.


One of the biggest challenges faced by solid-state lighting designers is reliability. Electrical and thermal conditions are two major factors affecting device life and lighting output and, while long life is a key benefit of LEDs compared to incandescent and fluorescent light sources, all bets are off if the LEDs exceed their temperature ratings.

Thermal management continues to vex LED lighting designers, particularly for high brightness LEDs that continue to escalate in forward current while decreasing in package size. Couple this with potentially high-temperature applications such as streetlights and high-bay lighting in warehouses, and it becomes apparent that there is a major hurdle to overcome.

With an estimated 20 percent of global energy used for lighting, LED driver suppliers are more than aware of these challenges and are starting to integrate thermal foldback control into some of their designs to protect LEDs from failure and reduced lifetime due to high-temperature environments. Thermal foldback limits the LED temperature to protect against failure by reducing the LED current as the ambient temperature increases; this arrangement continues to decrease the current until the LED junction temperature returns to a safe operating temperature. The result is higher reliability, longer operating life, and, in some cases, increased safety.

In this article, we will look at how LED driver manufacturers are using thermal foldback to deliver higher reliability for high-brightness area lighting applications such as streetlights and high-bay lighting, as well as for retrofit bulbs.

What thermal foldback does is to reduce the LED current when the temperature rises. Driver IC makers agree that the critical component of any thermal foldback circuit is the negative temperature coefficient (NTC) thermistor, which monitors the temperature of the LEDs. This resistive device is typically placed as close as possible to the LEDs to obtain the most accurate thermal sensing. As the temperature rises (above the set value), the NTC's resistance decreases, resulting in a decrease of the output current of the LED, (and dimming of the light output). Driver IC makers use either pulse width modulation (PWM) or analog dimming to control the light output.

Texas Instruments' TPS92510, a 1.5 A DC/DC buck converter for driving high-brightness LEDs, is well suited for area lighting applications. It integrates thermal foldback with an external NTC that protects the LED array from overtemperature while maintaining reduced light output. Like all thermal foldback circuits, it reduces the output current to ensure that the LED temperature does not exceed the set value, protecting the LED from catastrophic failure.

Most manufacturers say it is acceptable to reach 125°C, but beyond that temperature, LEDs start to degrade and their lifetimes become shorter. What’s more, if they get too hot they fail, noted John Perry, product marketing engineer for Texas Instruments' lighting power solutions in Dallas, TX.

"Certainly the efficiency of the heatsink matters but you cannot always protect against every possible scenario temperature-wise," said Perry. "So another way to protect the luminaire is with thermal foldback."

As shown in Figure 1, the TPS92510's TSENSE (thermal foldback protection) pin connects to the NTC thermistor to lower the average LED current as the LED temperature rises. The resistance of the NTC will decrease with rising temperature, which will lower the voltage across the NTC. 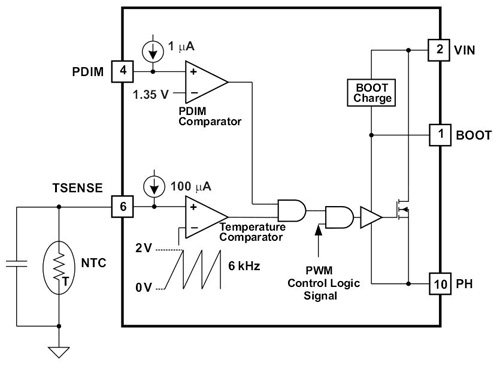 Figure 1: The TI TPS92510 reduces the LED output current when the NTC's resistance decreases as the temperature rises above the set temperature point, lowering the light output and protecting the LED from failure. (Courtesy of Texas Instruments.)

As soon as the TSENSE pin drops below 2 V because of high temperature, the devices goes into PWM modulation of the LED current, which means the visible brightness of LED will drop because it is no longer dissipating as much power, according to Perry. The temperature will start to come down and eventually it should come down far enough where it reaches a steady-state level. An evaluation board for TPS92510 also is available.

For every degree Celsius the temperature of the resistor increases, the resistance drops and the driver IC will lower the regulated LED current in response to the NTC resistance decreasing, according to Perry. If LEDs are damaged at 125°C, the light designer may want to have protection initiated at around 115°C, he said. Once it goes above the temperature of concern, thermal foldback is implemented.

The end user still maintains some light, albeit reduced from maximum. However, at the same time, it protects the LEDs from overtemperature damage. Said Perry: “This is a benefit for applications such as streetlights and other areas where you wouldn't necessarily want the light to turn off under high temperature. From a safety point of view, for example, the streetlight did not go out because it got hot."

TI also incorporates thermal feedback control in bulb applications such as recessed can LED fixtures. For example, the LM3447 (Figure 2) phase dimmable, primary-side power-regulated PFC flyback controller uses an NTC and the same voltage-rated information about what's happening across the NTC, but instead of PWM modulation it lowers the reference voltage of the part. The device can be used in dimmable A19, R20, and PAR30/38 LED lamps. An evaluation board designated LM3447-PAR-230VEVM is available on the Hotenda website. 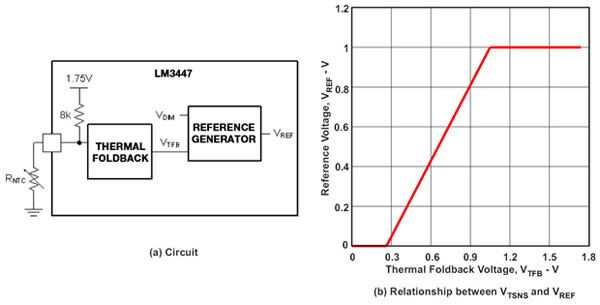 The net effect of the two approaches is the same, according to Perry. “It lowers the average current to the LEDs so it lowers the power they dissipate, which in turn reduces the temperature rise and at some point reaches equilibrium.”

Similarly, Exar's XRP7613 (Figure 3) programmable high-brightness LED driver, which incorporates thermal current foldback, supports analog and PWM dimming. Designed for retail and architectural lighting applications, the XRP7613 is small enough to fit into MR16 bulb sockets. For safety reasons – to ensure that the light stays on as long as possible – these drivers also are finding homes in theater lighting such as fixtures used in operating rooms or other medical facilities.

Figure 3: The negative temperature coefficient (NTC) thermistor used in the XRP7613 needs to be placed as close as possible to the LED source to monitor temperature rise around the LED. (Courtesy of Exar.)

The thermal current foldback mode maintains the LED light under stressful temperature conditions where most other drivers would turn off, said Pittana. The device gives consumers a better lighting experience as well as a longer-lasting and more-reliable lighting fixture, he added (Figure 4) 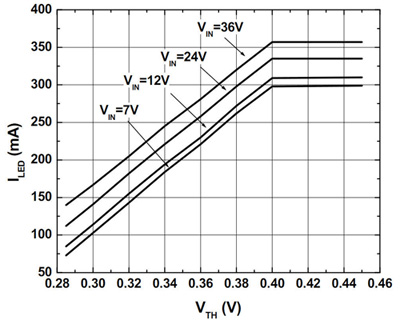 Figure 4: When the LED temperature rises above the predefined temperature threshold (set here at 70°C), the LED thermal regulation circuit lowers the LED current until the LED driver reaches equilibrium. However, if the temperature keeps rising it will shut off the LED like traditional drivers. The XR7613 monitors the LED temperature by measuring the voltage on the TH pin. (Courtesy of Exar.)

For smaller form factors like the MR16, one of the major hurdles manufacturers face is thermal management, which relies on a lot of approximations, according to Pittana. Manufacturers use modeling but that depends on a lot of variables such as where the light is positioned, type of airflow, if any, and whether it is a cold or warm day, he said.

"With the XRP7613, we allow our driver to reduce dynamically the power that is being outputted to the LED and guarantee that the light will stay on longer than it would have if that function was not there," he said. "It would allow the point of light to reach temperature equilibrium, but still provide some light."

Because the function is programmable, every manufacturer can decide at what temperature the actual dimming will start and they can program that through a simple external resistor or thermistor, said Pittana. In addition to the setting being programmable, the function can be disabled, although it will defeat the purpose, he added. An evaluation board for the XPR7613 (XRP7613EVB) can be found on the Hotenda website.

Thermal foldback control protects LEDs from catastrophic failure. This function keeps the light on, although at a lower light output, while ensuring that it maintains its long operating life, one of the key benefits of LED lighting. Thermal foldback also is beneficial because thermal stress has an impact on overall efficiency, which could impact the LED's light output over its lifetime.