This article will consider the power requirements of the new generation wireless network small cells (metrocells, femtocells and picocells) and look at how solar technologies can be adopted to power them.


With the massive expansion in the number of smartphones and other digital devices that connect to the Internet via the mobile phone network, both coverage and capacity of existing installations are under pressure. The industry has turned to small cells to solve the problem: metrocells, femtocells and picocells. This new genre of equipment ranges from low-cost products to boost the mobile phone signal in the home, to street-level cells that can be mounted on lampposts, to high-throughput metrocells providing wider coverage.

ABI Research² makes a more modest forecast, anticipating a CAGR of a mere 63% for enterprise and consumer femtocells, generating revenue of $3.4 billion by 2017. Outdoor metrocells, the researcher claims, are currently attracting more attention.

What these small cells have in common is low-power operation, and the potential to be powered by solar energy. Solar powered small cells have already been deployed in a number of applications, both in the city and in remote rural areas.

This article will consider the power requirements of these new generation small cells and look at how solar technologies can be adopted to power these, reviewing a range of solutions from multiple vendors, including the Parallax 33000 34 W Solar Panel Kit; the IXYS Ixolar high efficiency solar cell, SLMD480H12L; and the Sanyo Energy (Panasonic) AM-5706 amorphous solar cell.

The deployment of small microcells is considered by many to be the only feasible way that wireless network providers will be able to meet the demand envisaged for handling the sheer volume of mobile data through next generation digital devices. This includes not only the gamut of consumer devices such as smartphones, tablets and notebooks, but also emerging applications allied to the ‘Internet of things’ movement.

For example, European-based research projects in the ETSI M2M communications track are working on road traffic information and assistance systems based on 3GPP cellular technology. Both 3G and LTE are expected to be the predominant cellular wireless access standards used for vehicles. The anticipated availability of broadband mobile networks is forecast to be the catalyst for the take-up of intelligent transport systems. The researchers have already noted that cellular coverage can be effectively augmented by using femtocells (conforming to 3GPP specifications) to create a low-latency local 3G connection, acting as a traffic application server located at the roadside.

Although there continue to be technical challenges to overcome, small cells are expected to limit interference, reduce handovers, minimize dropped calls, and improve quality of service while maximizing capacity and supporting high-speed applications. Small cells are being incorporated into macrocell networks, creating heterogeneous networks (HetNets).

While the market watchers agree that to be successful these microcells must be inexpensive with a low operational cost, small size and low power, there are different opinions on which electronics hardware/software design will win out. On the one hand, there is a view that low-cost base stations can only be achieved by using standardized parts available in high volumes, trending away from the fully programmable types of devices such as FPGAs and DSPs currently popular in macro base stations. Conversely, some chipmakers are forecasting a move towards System on Chip (SoC) devices that integrate DSP, CPU and acceleration cores to support 3G, 4G, and Wi-Fi, as well as some media processing capability that may cost as much as $100 each. However, all parties agree that low power consumption is essential.

Microcell and small cell are generic terms used for all cells smaller than macrocells or conventional mobile phone base stations. First introduced some years ago, femtocells are deemed as the original microcell. Typically, they are small terminals used predominantly in homes or small offices that lack good cellular signal coverage. In such applications, femtocells use the consumer’s broadband connection for backhaul, particularly for high bandwidth mobile data connections. In some open and HetNet installations, femtocells can be integrated into a managed network with gateway access to the macrocell network.

Although regarded by some as limited to residential applications, femtocells are nevertheless being successfully deployed in remote regions, in developed countries with extensive but less than full coverage, as well as in emerging markets. The installation of femtocells in remote locations in countries where there is little telecom infrastructure is having the effect of bypassing conventional routes to Internet access, via a PC and standard broadband connection. 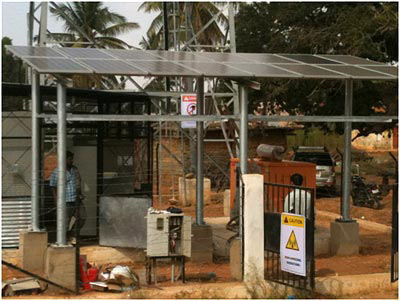 Figure 1: Solar powered telecom installation in Kolar, India. It was initially powered by a diesel generator. The solar-powered system has resulted in an overall reduction in operating costs of 86% and a reduction of CO2 emissions of 21 tons per year. Payback period is 3 years. Source: Solar Novus.

A low-power femtocell, requiring less than 5 W, can be easily sustained via solar energy generation with batteries to store energy and provide back-up during the night. 5 W is not uncommon for femtocells and the first 5 W reference design was announced back in 2010 with a BoM of $50.

Femtocells can also provide an effective and efficient backhaul connection via satellite networks. The dramatic growth in satellite capacity is encouraging the development of low-cost, low-power (20 W or less) satellite receivers that, when combined with a 3G femtocell and powered by solar cells, can bring service to almost anywhere cost effectively. These are sometimes referred to as greater femtocells or picocells. Asia Pacific’s Thailand-based broadband satellite operator Ipstar offers femtocell-based backhaul cellular services for remote areas. It can also be powered by solar energy.

3G and 4G/LTE metrocells are typically deployed by mobile service providers to deliver increased capacity in dense urban areas. They can be installed both indoors and outdoors and may typically provide coverage across a number of streets, or an equivalent area in a commercial center or railway station, on a line-of-sight or near-line-of-sight basis.

An impressive example of a recent deployment of metrocells and femtocells is the network installed by Telefonica for the London Olympics last year. Metrocells have been installed across London on 400 street lamps. In the London Olympic Village, a mix of 1500 metrocells and open access indoor femtocells achieved a throughput of 1 Gbit/s per square kilometer. The network further included 14,000 Wi-Fi access points, deployed on every fourth street lamp.

The major concerns regarding the deployment of small cells are site acquisition, power, and backhaul, with planning, installation skills, and maintenance also regarded as important. From a power perspective, some of the new generation microcells require AC power or can benefit from power-over-Ethernet, if available. A solar power option is becoming popular. Small solar-powered femtocells from Alcatel-Lucent, with a total power consumption of 15 W (including backhaul), have been successfully deployed by Telefonica in trials. 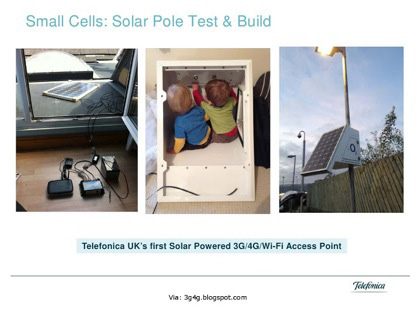 If network capacity and coverage were not reasons enough, another major driver towards the mass deployment of microcells is global energy saving. Information and Communications Technology (ICT) is reported to be responsible for 2 to 2.5 % of global CO2 emissions. According to the ITU, about 10% of total ICT emissions are attributable to mobile phone networks, and more than half is due to the radio access network. Macrocell base stations typically consume between 2.5 and 4 kW.

Small cells running at low power (2 W or less), and delivering coverage and capacity to where they are needed, are considered to be more efficient in terms of energy and RF power, even when high volumes are needed to cover large urban areas. An added bonus is that handsets connect to the network more easily, thereby extending battery life between charges.

Many telecom companies have set their own targets for energy reduction, while governments are incentivizing industries to help meet international efforts to reduce the global carbon footprint. Schemes include subsidies for solar and wind energy generation, and legislation on new buildings and installations.

As a direct result, many microcell and femtocell designers are implementing sophisticated power management integrated circuits and adopting specialized techniques such as sleep mode, to keep power consumption down. All of this makes the use of alternative, renewable and harvested energy sources strong contenders for powering small cells in many applications. For many femtocells and microcells as well as Wi-Fi access points, solar power is an attractive and viable option. It is particularly suitable for temporary applications, such as major events like the Olympic Games, disaster recovery in areas hit by earthquakes and floods, or even in war zones.

In some areas, large solar power installations may be installed to provide energy for a range of essential equipment in a village. There will always be a requirement for solar cells providing power to small, isolated equipment. The idea behind femtocells is that they can be easily, quickly, and economically deployed.

Monocrystaline solar cells are considered to be the most efficient type of cell and perform well in low-light conditions. They are also highly robust and ideal for outdoor, as well as indoor applications.

One type of solar panel suitable for such applications is the 34 W Solar Panel Kit from Parallax. A favorite with hobbyists, this is also a professional grade kit, producing up to 34 W of clean, green, electrical energy. It features an array of twelve 2.85 W, 18.5% efficiency monocrystalline cells.

These are ideal for powering small cells as the panels are built to last in an outdoor environment. With high light transmission properties, the units can be permanently sealed for increased ruggedness and deliver up to 6 VDC. As a result, the kit is specifically designed to provide power for small equipment, such as remote monitoring and control systems. Furthermore, multiple units can be daisy-chained together for higher voltage and current or power output, making them ideal for solar charging back-up batteries.

Alternative monocrystalline cell offerings are the Ixolar range of SolarBIT products from IXYS. These are ideal for indoor and outdoor telecom applications and can be used either to directly power remote installations or charge back-up batteries. A typical model in the range, the SLMD480H12L for example, uses 12 cells connected in series and has a 22% cell efficiency, offering a 7.56 V open circuit voltage, 6.06 V typical voltage and 18 mA typical current. 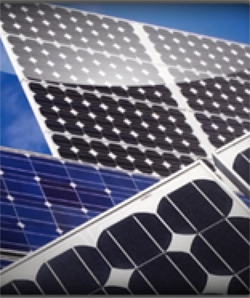 Another option is to use amorphous panels. These are less efficient in terms of converting collected light into electricity, but have the benefit of continuing to charge even when partially shaded. They can also be cheaper to buy and several vendors, including Sanyo Energy (now part of Panasonic), highlight the technology that allows multiple cells to easily be connected in series at the same time the cells are formed, meaning it is simple to create systems with different voltages, which perfectly suit the intended application.

Sanyo’s Amorton range of amorphous solar cells has products for both indoor and outdoor use and its AM-5706 would be suited to outdoor cells. The mid-range product features a voltage output of 6 V and operating temperature range from –10°C to 60°C.

The mobile telecoms market is transforming, especially as we enter the 4G era, and small cells are seen as the answer to coverage and capacity for both urban and rural areas.

Small cells have also become an essential part of emergency equipment for areas where natural disasters have struck, such as earthquakes, fires, and floods. They are also ideal in temporary installations, such as those used at the 2012 Olympics.

Nevertheless, as the numbers increase, the need for greener systems is essential and alternative power supplies, particularly solar, for these systems are set for wide-scale adoption.

The market for small cells is forecast to be explosive, and this means the market potential for solar powered systems and associated rechargeable battery technology is huge.