This article will outline the technical and commercial advantages of the PONs (Passive Optical Network) trend, and consider the challenges that the move towards XGPON systems is placing on optical network component vendors.


The staggering growth in data traffic as a result of ‘always connected’ Internet devices, cloud computing, and the increase in video content, has been well reported. The energy demands of server farms and data centers reflect this growth. Moves are afoot to address the power consumption issues of the ICT sector.

In many applications, optical fiber is already the preferred medium for higher-speed, higher-bandwidth data networking, in data centers, at the enterprise and metro levels, and for carrier services. It is less well known that optical networking could also contribute towards reducing energy requirements. Passive optical networks (PONs) are becoming popular in the ICT sector and high growth is forecast. PONs not only deliver high speed and bandwidth cost effectively, but they are also slated to reduce power consumption dramatically.

This article will outline the technical and commercial advantages of the PONs trend, and consider the challenges that the move towards XGPON systems is placing on optical network component vendors. Relevant passive-optical devices include passive-optical splitters, isolators, circulators and filters, as well as the all-essential transceivers. A look at current technology devices, such as 10 Gbps optical transceivers from companies including Avago and Finisar, will highlight the way forward.

The need for speed

Despite the significant improvements in network data rates, bandwidth, and overall capacity, demand continues to increase in both telecom and datacom applications. The massive growth in data traffic is creating challenges for the carriers, and requiring dramatic expansion in capacity in enterprise networks and data centers. The adoption of optical components in today’s networks is accelerating, and such devices are enabling the move, expected to be rapid, towards 100 Gbps systems.

Fiber-optic technology has already proved useful even at 1 Gbps speeds, and has grown in use for 10 Gbps systems currently deployed at data centers and at the enterprise level. It is set to become the norm for the ongoing 40 Gbps upgrade path, and expected to peak this year. 100 Gbps systems are forecast to start ramping up from this year onwards. Optical fiber is proving practical for higher speeds over shorter distances up to 100 m. These are most in demand for applications including servers, routers, and switches in data centers. Fiber not only reduces the size and weight of cables, but is equal in cost, minimizes EMI, and reduces overall power consumption.

According to Infonetics Research,1 optical transport network (OTN) switching is no longer a niche technology. It is going to be a requirement for most wavelength division multiplexing (WDM) transport platforms in the metro and all higher-density systems in the core. The company sees a merging of the OTN switching and WDM transport markets, with a market size of $13 billion by 2017. Shipments of 100 Gbps optical transceivers are forecast to double in 2013 and 2014.

A passive optical network (PON) is a cost effective way of providing high-performance fiber-to-the-home connectivity, by using shared optical fibers, it obviates the need for multiple point-to-point connections. A PON uses small, inexpensive, unpowered optical splitters rather than the comparatively large, expensive and power-hungry optical repeaters used in traditional optical networks. A PON splitter connects typically up to 32 (but can be more) homes or premises on the same network. A PON consists of an optical line terminal (OLT) at the service provider’s central office, and a number of optical network units (ONU) deployed closer to the end users (Figure 1). 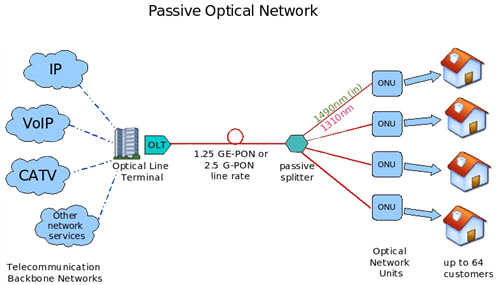 A market report from TechNavio2 forecasts a CAGR of nearly 30% in PON equipment worldwide, and 32.4% in the Asia-Pacific region over the period of 2012 to 2016. Demand for more bandwidth and huge growth in China are cited as the leading factors.

State-of-the-art technology in this sector is the Gigabit PON (GPON), which has been widely deployed in the US and Europe by telecom operators in metro and rural telephone networks, bringing fiber to the home and business premises. 10GPON versions (10 Gbps downstream, 2.5 Gbps upstream) are already in the pipeline and are being installed in some advanced applications. GEPON is the Ethernet compliant version of a GPON, supporting 1 and 10 Gbps speeds, and beyond.

40GPON systems are under development within the Full Service Access Network 3 (FSAN) Alliance. Standards are being finalized and systems are expected to be shipped during 2015. These are expected to feature a sleep mode to reduce power consumption. For next-generation PON technology, FSAN’s 80+ members, including 20 network operators, have agreed on time and wavelength division multiplexed (TWDM) overlay extensions.

Another promising development is the Bit Interleaved PON (BiPON) announced by the GreenTouch Consortium4. This influential group of companies, carriers, research institutes and universities has the overall aim of improving efficiency in the ICT sector by a factor of 1000 over the next decade. The BiPON protocol uses bit-interleaving techniques to discard unwanted data and reduce processing requirements, thereby matching data rates to the voice, video, or data services required. The end-result is a dramatic reduction in power consumption. Technology developed by Alcatel-Lucent Bell Labs and IMEC is expected to cut power needs from 2 or 3 W for conventional XGPON chips, down to about 100 mW.

In addition to deployment in telecom networks, passive cable systems are also being rapidly adopted in data centers by firms such as Google and Amazon for machine-to-machine, short run connections of up to 15 m, to reduce power consumption, heat, and cost.

Sandia National Laboratory in Albuquerque, New Mexico, a pioneer user of PONs, has replaced 600 individually managed data switches with 14 optical LAN elements, making it the largest fiber-optic LAN worldwide. The installation is claimed to have reduced its network energy usage by 65%, saving $20 million over five years in energy bills and other costs. Not only does it provide more capacity, but also fiber’s longer range has allowed it to connect remote on-site facilities to high-speed communications networks for the first time. It is also more secure and reliable, has generated significant space savings, and reduced maintenance effort and cost.

A key component in any optical networking system is the optical transceiver making electro-optical data conversions. According to the LightCounting market forecast database for 2013 to 2017,5 revenues will continue to increase year after year, growing to $5 billion in 2017 (up from $3 billion in 2012). Transceivers for DWDM and Ethernet applications are the growth drivers, primarily due to rapid uptake in 40 Gbps and 100 Gbps ports. However, 10 Gbps systems dominate the Ethernet sector and will do so until 2017 when 100 Gbps devices will take the lead. Customers are looking for smaller form factors and lower power consumption.

A major player in this sector is Avago Technologies, delivering innovative fiber-optic solutions for 10, 16, 40, 100 Gbps systems and beyond. The HFBR-5911LZ optical transceiver is a typical device in its current range. It is designed for use in short reach (up to 500 m) multimode fiber-optic links operating at 1.0625 or 1.25 Gbps, ideal for Gbit Ethernet or Fibre Channel networking equipment. 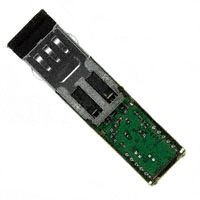 For enterprise and metro networks running 10 Gbit Ethernet, Avago offers the AFBR range of optical transceivers. The AFBR-703SDDZ is in a SFP+ (small form factor pluggable) housing with an LC-Duplex connector, as used in most modern data centers. It utilizes the company’s 850 nm VCSEL and PIN detector technology. With a 10.312 Gbd data rate, typical power dissipation is 600 mW. The unit features optical interface specifications compliant with 10GBASE-SR standards.

Specializing in pluggable optical modules, Finisar offers a broad selection of innovative devices allowing datacom and telecom companies to expand their operations on a modular basis. The range includes transmitters, transponders and transceivers to suit a wide range of standards, form factors, and applications. The modules are capable of operating over distances from short reach for use within data centers, to medium reach for campus and metro applications, and long haul for carriers.

Many of the modules incorporate a microprocessor and diagnostics interface for reliable performance monitoring. The feature allows users to monitor remotely, in real time, the transmitted and received optical power, laser bias current, transceiver input voltage, and transceiver temperature of any optical device in the network.

A typical optical transceiver module from Finisar is the FTLX1412D3BCL small form factor (XFP) device, which complies with 10 Gbit Ethernet 10GBASE-LR/LW standards. It supports 9.95 to 10.5 Gbps bit rates and has a maximum link length of 10 km. Power dissipation is less than 2 W, and it uses an uncooled 1310 nm laser. It requires only a 3.3 V power supply and incorporates an LC-Duplex connector. Digital diagnostic functions are available via a 2-wire serial interface. 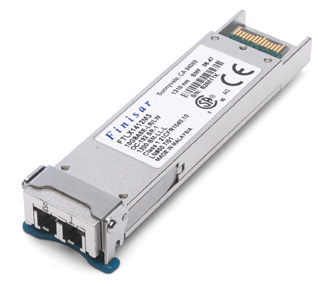 For SFP+ 10 Gbps applications, compliant with 10GBASE-SR/SW standards, is the FTLX8571D3BCL. It supports 9.95 to 10.5 Gbps bit ranges and operates from a single 3.3 V supply with power dissipation less than 1 W. It uses an uncooled 850 nm VCSEL laser and has a maximum link length of 300 m. The device features an LC-Duplex connector and offers built-in diagnostics functions.

Another interesting option for developers is the Finisar FDB-1027 Evaluation Board. Featuring a single SFP+ edge connector and cage, and four 50 Ohm SMA coax connectors to accommodate the high speed-differential transmitter input and receiver output signals, the board is ideal for testing and evaluating short and long wavelength SFP/SFP+ optical transceivers at data rates from 125 Mbps to 10.3 Gbps. 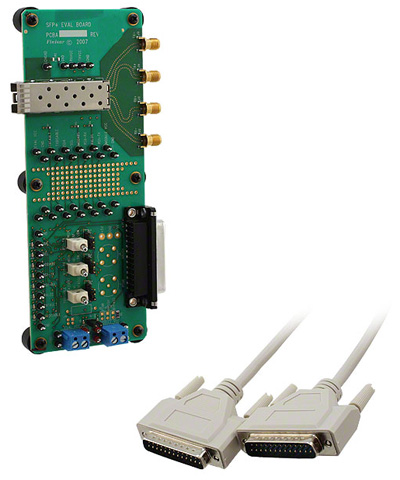 Fiber-optic technology will be the enabler to meet the demand for ever higher-speed, higher-bandwidth data networks. Pressure is growing to reduce the energy consumption of our rampant ICT sector. Passive optical networks are one way forward to meet these dual goals. Optical transceivers are a critical component in today’s optical networks, and the pressure is on component manufacturers to develop devices that meet the technical challenges of high data rates and low power operation within standard form factors.