Driving a string of highbrightness LEDs at full capacity requires careful design, as does achieving a wide dimming ratio while at the same time maintaining the color spectrum


Driving a string of high brightness LEDs at full capacity requires careful design, as does achieving a wide dimming ratio while at the same time maintaining the color spectrum. Fortunately, there are some integrated driver packages that are up to the challenge.

A high-power LED’s light output has already achieved the critical milestone of 100 lumens/W, with some manufacturers claiming 120 lumens/W in the laboratory. This means that the LED has now surpassed the CFL (80 lumens/W) in terms of energy efficiency. Nevertheless, it is further projected that by 2012, the LED will attain 150 lumens/W output. Furthermore, with all the current focus on being “green,” the LED does not contain any hazardous materials like the CFL, which has toxic mercury vapor inside the tube.

The cost of LED lighting has come down very quickly. The cost of individual white-light diodes, several of which go into an LED bulb and make up much of the cost, have come down in price from about $5 a few years ago to less than $1 in the last twelve months. Many LED industry analysts predict that over the course of the next 12 months, LED bulb replacements for the incandescent light bulb will be priced at a level that will be acceptable for the consumer. Some LED manufacturers have already claimed that they have designed light-emitting chips that could power an LED bulb producing light comparable to the 75-Watt incandescent bulbs so commonly used in American homes. This type of LED chip usually requires ~12 W of power in order to be able to output this amount of light.

One key performance feature that an LED driver IC must have today is the ability to adequately dim LEDs. Since LEDs are driven with a constant current, where the DC current level is proportional to LED brightness, to vary the LED brightness, there are two methods of dimming the light by controlling the LED current. The first method is analog dimming, where the LED DC current level is reduced proportionally by reducing the constant LED current level. Reducing the LED current can result in a change in LED color or inaccurate control of the LED current. The second method is digital or pulse-width-modulation (PWM) dimming. PWM dimming switches the LED on and off at a frequency at, or above 100 Hz, which is not perceivable to the human eye. The PWM dimming duty cycle is proportional to LED brightness while the on-time LED current remains at the same level (as set by an LED driver IC), maintaining constant LED color during high dimming ratios. This method of PWM dimming can be used with ratios as high as 10,000:1 in certain applications.

Specifically, in the case of driving high brightness (HB) LEDs, LED driver ICs must be capable of delivering sufficient current and voltage for many different types of LED configurations — in a conversion topology that satisfies both the input voltage range and required output voltage and current requirements. Thus, HB LED driver ICs should ideally have the following features:

There is no question that the majority of automotive headlights still use the incandescent light bulb. However, this dominance is under pressure from both high intensity discharge (HID) lamps and HB LED headlights going forward. HID lamps include all high intensity discharge lamps used in general lighting such as High Pressure Mercury Vapor, High Pressure Sodium, Low Pressure Sodium and Metal Halide. General lighting sources are sufficiently bright to enable a working or living environment in a room, a building or an external space. This includes residential lighting, commercial and industrial lighting, street lighting and automotive headlights. HID Xenon lamps were first introduced for use as an automotive headlight in the late 1990s. However, they are very expensive to produce and make, so their use has been limited to high-end vehicles only. Going forward, due to the recent introduction of HB LEDs, the use of such HID Xenon lamps will quickly decline. Thus, the HB LED headlight will have the largest growth rate in next decade. 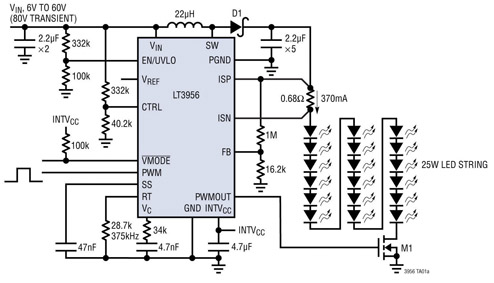 A 25 W white LED headlamp can be configured using an array of 18 LEDs in series and driving them with 370 mA to to produce the necessary light output. However, a major obstacle is how to efficiently and simply drive such a configuration. One possible solution is to use the recently introduced LT3956 monolithic LED driver from Linear Technology. The LT3956 is a DC-DC converter designed to operate as a constant-current and constant-voltage regulator. It is ideally suited for driving high current, high brightness LEDs (Figure 1).

The LT3956 features an internal low side N-channel power MOSFET rated for 84 V at 3.3 A and is driven from an internal regulated 7.15 V supply. The fixed frequency, current-mode architecture results in stable operation over a wide range of supply and output voltages. A ground-based referenced voltage feedback (FB) pin serves as the input for several LED protection features and also makes it possible for the converter to operate as a constant voltage source.

The LT3956 senses the output current at the high side of the LED string. High side sensing is the most flexible scheme for driving LEDs, allowing boost, buck mode or buck-boost mode configurations. The PWM input provides LED dimming ratios of up to 3,000:1 while the CTRL input provides additional analog dimming capability. 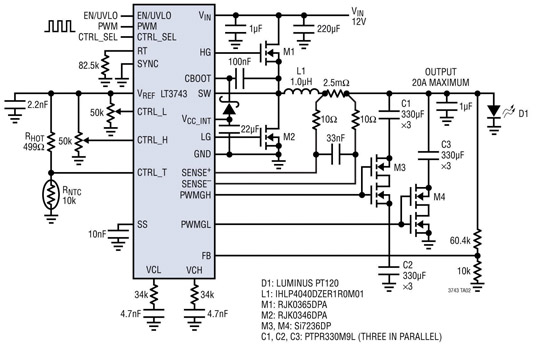 Nevertheless, there are other end market applications that have their own unique needs for high-power HB LED drivers where LED currents of greater than 10 A are necessary. These include DLP projectors, laser drivers and architectural lighting. However, delivering currents greater than 10 A can bring a host of design problems, not least of which is the thermal management aspects within the end product itself. To this end, Linear Technology has developed a unique LED driver to specifically address the design considerations in these types of applications.

The LT3743 is a synchronous step-down DC-DC converter designed to deliver constant current to drive high current LEDs. It can deliver up to 20 A of continuous LED current or up to 40 A of pulsed LED current. The LT3743’s unique design enables three-state current control, which makes it ideal for color mixing applications required in DLP projectors. It also offers very fast (<2 μs) transition times current level. This optimizes color mixing resolution and allows very fast current pulsing in laser driver applications.

The LT3743’s 5.5 V to 36 V input voltage range makes it ideal for a wide variety of applications, including industrial, DLP projection and architectural lighting. The LT3743 provides up to 20 A of continuous LED current from a nominal 12 V input, delivering in excess of 80 Watts of power. In pulsed LED applications, it can deliver up to 40 A of LED current or 160 Watts of peak power from a 12 V input. Efficiencies as high as 95 percent eliminate any need for external heat sinking and significantly simplify the thermal design. A frequency adjust pin enables the user to program the frequency between 100 kHz and 1 MHz so designers can optimize efficiency while minimizing external component size. Combined with a 4 mm x 5 mm QFN or thermally enhanced TSSOP-28 package, the LT3743 offers a very compact high-power LED driver solution. See Figure 2 for its typical application schematic.

The LT3743 offers both PWM and CTRL_SELECT dimming, enabling 3,000:1 dimming capability at three LED current levels. This makes it ideal for color mixing applications such as those required in DLP projectors. Similarly, the LT3743’s unique topology enables it to transition between two regulated LED current levels in less than 2 μsec, enabling more accurate color mixing in RGB applications. An LED current accuracy of ±6 percent is maintained in order to ensure the most accurate luminosity of light output from the LED. Additional features include output voltage regulation, open-LED protection, over current protection and a thermal derating circuit.

Despite the long list of performance characteristics necessary in HB LED drivers, the LED being driven by the LED driver has to be capable of delivering the necessary lumens of light output from the lowest possible level of power without causing significant thermal design constraint. Fortunately for the designers of high-power HB LED products, there exists both high efficacy LEDs and high performance LED drivers to drive them.