High-Mast LED Solutions a Must for Airport Apron Lighting


In the cutthroat business of commercial air transport, airport operators are constantly looking for solutions that not only cut running costs, but also enhance the passenger experience. LED-based, energy efficient lighting clearly fits the bill. Providing an additional incentive is the LEED (Leadership in Energy and Environmental Design) scheme, whereby an airport can achieve Gold Certification for energy efficient lighting, giving it a perceived competitive edge. Consequently, the market for LEDs in commercial airport lighting is skyrocketing.

This article will focus on high-mast lighting, which has similarities to the requirements for street and roadway lighting. The difference is that the masts are often much taller, 30 meters or more, compared to 10 to 20 meters for streetlights. High-mast outdoor area lighting at airports, primarily on aircraft parking aprons and car parking areas, is rapidly being converted to LED light sources.

The primary motivator is cost savings resulting from low-energy operation and reduced maintenance, claimed to be 50% or more. However, other recognized benefits include improved safety due to a higher color rendering index for better nighttime visibility, and enhanced light quality through features such as dimmability, adjustable light intensity, selectable color temperature, instant-on, flicker-free operation, and overall controllability. 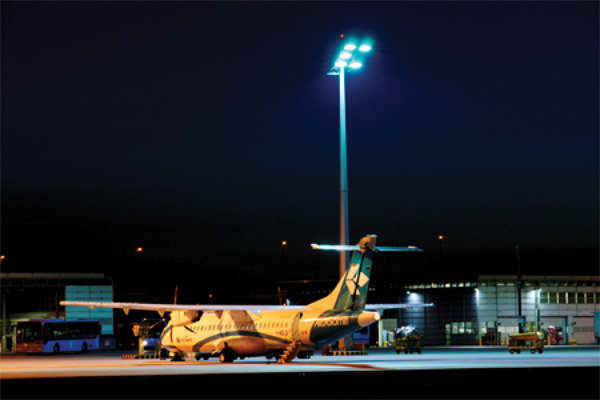 Figure 1: Munich airport, one of Europe’s largest, is replacing its HPS high-mast floodlights with LED modules to save energy costs and CO2 emissions.

This article will consider two LED families that are widely used in high-mast lighting applications: Cree’s XLamp® XT-E range and Philips Lumileds LUXEON®-K range. Design tips will be referenced on how to estimate the type and number of LEDs needed per module for the required light output. Further emphasis will be made on the importance of illuminance simulation to demonstrate and verify the light distribution of the design configuration.

Further guidance on the requirement for thermal management, and heatsinks in particular, will also be included. This point is illustrated with TE Connectivity’s solderless LED holder (217340) and how it is assembled with a suitable thermal interconnect material (TIM). Examples include the Ultrastick thermal compound from Aavid Thermalloy, and the Ohmite and Nuventix heatsinks designed specifically for the LUXEON-K LED arrays.

New installations at airports are typically exploiting LEDs for high-mast lighting applications. Meanwhile, many airports and airfields are seeking to upgrade to LED lighting, exploiting existing infrastructure. Birmingham airport in the UK is seeking a contractor to upgrade its high-mast lighting to LEDs. Munich airport, meanwhile, one of Europe’s largest international hubs, has recently announced it is replacing high-pressure sodium (HPS) lamps with LED-based solutions both airside on aircraft aprons and on roadways and parking areas. See Figure 1 above.

With the twin aims of saving on energy costs and ensuring CO2 emissions do not exceed 2005 levels, Munich airport expects to halve its annual energy consumption and reduce CO2 emissions by 70 tons, just on completion of phase one. Further replacement of apron floodlights and exterior lights is anticipated to save more than 5000 tons of CO2 annually. Each HPS high-mast lamp will be replaced with a module containing 288 Cree XLamp XT-E LEDs. However, it is only recently that sufficiently high-brightness, high-efficacy LEDs have been available at an appropriate price point to meet the demands of high-mast lighting.

Clearly, the energy saving potential in these high-power, high-mast type applications is enormous. Fixtures that typically use 1000 W HID, metal halide or HPS lighting fixtures can easily be replaced by 204, 320 or 400 W LED fixtures. Light output can be anywhere from 16,000 to as much as 40,000 lm flux.

With LEDs, a CRI of 70 to 95 is easily achieved, which is important for better nighttime visibility, and is therefore regarded as a safety issue. Colors are rendered more naturally, and they avoid the yellow hues common with HPS light sources (CRI around 25), which can be a real problem in poor weather conditions.

The ability to select color temperature is important too, either as a constant or programmable feature. With a range from 3000K to 6000K, light quality can be specified to match the precise nature of the target area to be illuminated. With LEDs, light intensity can be dimmed from 100 to 75% or lower, to generate even greater energy savings. Lifetime is typically guaranteed over 50,000 hours, with a warranty of 5 years, resulting in the next significant cost saving factor: reduced maintenance.

Designing high-mast lights more than 30 meters above the ground has some similarities to streetlights, but some differences too. High-mast luminaire designers typically perform illuminance and luminance simulation calculations to demonstrate that the proposed installation provides uniform flood lighting across the required area. In most retrofit applications, the design is constrained to using existing high-mast poles.

It is just as important to verify that the design meets lighting requirements and eliminates halos and dark zones over the entire area to be illuminated to avoid light pollution. Light spilling into areas where it is not needed is not only wasteful, but may often be undesirable. Examples of nuisance lighting include overspill into nearby residential areas and hotel complexes, blinding drivers on nighttime roads, and creating a ‘sky glow’, especially in rural areas, from unshielded uplighting.

Leading LED vendor, Cree, has produced a number of application notes, design guides and reference designs aimed at helping lighting designers and specifiers ensure they create the most appropriate luminaire for the application. A good start is the LED Luminaire Design Guide,1 a generic document providing general guidelines organized as a six-point design process.

In addition, Cree has published the XLamp XT-E Streetlight Reference Design.2 The XT-E LEDs are not only widely used for streetlights, but also for other high-mast lighting applications such as airport apron lighting, making much of the content of this document particularly useful. It details issues such as the ideal intensity distribution for overhead lighting, depending on the area to be lit and the IES-MLO defined lighting zones. It summarizes the systems for evaluation of outdoor lighting installations, using the maximum lumen levels for backlight, uplight and glare – the so-called BUG values.

Further consideration is given to thermal requirements (heatsinks), secondary optics to meet beam pattern requirements, and the IP65-rated drive electronics. Usefully, Cree has an online Product Characterization Tool (pct.cree.com), which can be applied to determine the drive current for the design, given the target optical efficiency and driver efficiency. It will also calculate the number of LEDs required to achieve the light output specified in the design. Design constraints, such as power, efficiency, size (minimizing the number of LEDs per luminaire), and even cost, can be taken into consideration.

Figure 2: Left: DIALux simulation of a streetlight design incorporating four LED modules, each with fourteen Cree XLamp XT-E LEDs per luminaire, to produce a light output approaching 11,000 lumen. The simulation shows the light distribution with 10 meter high masts at 30 meter intervals on each side of the roadway. Right: DIALux visualization of typical high-mast lighting application.

Cree suggests that prototype designs can be simulated using the freely available DIALux software from German company, Dial, at www.dial.de. Evaluating the effectiveness of high-mast lighting designs needs to take into account not only the height of the mast and the amount of light reaching the ground, but the type of surface, whether dark tarmac or light concrete paving. See Figure 2 above.

Cree offers a wide choice of high-brightness LEDs in the XT-E range, but for high-mast outdoor lighting applications, the maximum lumen output will be achieved with the higher CCT-rated devices. The XT-E AWT-F51 and XT-E AWT-G51 feature a CCT of 6200K, delivering up to 126 lm/W and 135 lm/W light output, respectively.

Unlike traditional lighting sources, LEDs do not need heat to generate light. However, like other semiconductor devices, heat is generated as junction temperatures increase; in this case, at the active area where light is generated. Although building arrays of LEDs mounted onto a substrate can be reasonably thermally efficient, as the substrate typically conducts heat, a more effective and desirable solution is to mount the substrate onto a heatsink.

The Philips Lumileds Luxeon-K range of LED arrays is widely used for high-mast lighting applications. The devices feature high luminous flux, up to 4000 lm for some parts in the series, and a choice of color temperature from 3000 to more than 5000K. The LXK8-PWxx-0024, is at the top end of the range, delivering 2475 lm with a neutral white (4000K) light.

These arrays are described as ideal for easy assembly in space-constrained retrofit and downlight applications. The company has produced a useful Application Note,3 which includes assembly and handling information for these arrays, plus details on how best to mount them for optimum thermal management and electrical interconnection.

The metal core PCB substrate is manufactured from aluminum for a good thermal path between the LEDs, with mechanical mountings for attachment to a heatsink, and slots to feed electrical wires to the electrical pads on top of the substrate. TE Connectivity offers a special LUXEON-K solderless LED socket, the LK2173470, which can be used to electrically, mechanically and thermally secure the LED array onto a heatsink. See Figure 3 below. Alternatively, the emitter can be directly mounted onto a heatsink.

Figure 3: The TE Connectivity solderless LED socket designed for use with Philips Lumileds Luxeon-K LED arrays, in this case, the LXK8-PWxx-0012.

Philips Lumileds recommends the use of a thermal interface material (TIM) to thermally connect the emitter to the heatsink. The aim is to fill any minute gaps between the two surfaces. TIMs come in a range of formats including pastes, grease, graphite sheets, and pads. The company warns that excessively thick materials, such as some pads, may present an unacceptable thermal resistance, while some materials may be less effective at very high temperatures, creating voids in the thermal path.

Products such as Aavid Thermalloy’s Ultrastick phase change TIM can be used effectively as it is supplied in a convenient applicator bar, enabling a thin coat to be applied evenly and quickly. It is a paraffin-based compound which changes phase at 60°C with a concurrent volumetric expansion that fills the gaps. Operating temperature extends from -40 to 200°C.

With respect to the heatsinks themselves, Philips Lumileds emphasizes that its devices must be mounted onto a properly sized heatsink to ensure the junction temperature is kept below the maximum specified in the LUXEON-K datasheets. The application note provides details on how to make thermal measurements of the junction temperature by mounting a thermocouple onto the device.

In in-house tests, Philips Lumileds has demonstrated the effectiveness of the Ohmite SA-LED-113E heatsink, a black anodized unit that can be used with a range of star format LED arrays. However, other heatsinks specially designed for the LUXEON-K range are also available; namely the NX301113 from Nuventix.

High-mast LED lighting is not only appropriate for airport aprons and roadways. A number of allied applications requiring high-mast lighting are also switching to LED technology to gain these and other benefits. Facilities include large-scale industrial sites such as water treatment works. Cree has produced an interesting case study4 illustrating how a US water reclamation facility has improved nighttime visibility, as well as reducing energy consumption by upgrading its site lighting from HPS to LED high-mast luminaires. Similar applications can be found in transport and container facilities, railway yards, correctional facilities and truck stops, as well as sports and entertainment stadiums. The benefit of improved nighttime visibility is proving to be attractive when updating areas such as motorway interchanges and toll booth plazas.

In conclusion, it is perhaps ironic that the commercial airport business, arguably considered to be one of the world’s largest polluters in terms of CO2, is one of the loudest to extol the virtue of reduced carbon emissions brought by LED-based energy efficient lighting.