Electronics buyers can expect switch manufacturers to push for price increases in the second half because of higher prices for silver, copper, plastics, and other raw materials.

In some cases, switch prices have already increased. "We did a price increase during the March-April time frame because the price of silver has doubled, and copper and gold continue to go up 25-50 percent per year," said Gary Mountford, general manager for C&K Electronics, based in Newton, Mass.

"Oil and plastic costs are up. All of our raw materials have increased over the last year and we can't absorb those price increases," Mountford said.

Mountford added that those higher materials costs need to be passed on in the price of switches. "Generally when we increase prices 4-7 percent, we often don't recoup all the material cost increases."

As more switch production has moved to Asia where labor costs are low, materials represent a larger portion of a component's cost, Mountford said.

"When we built everything in the U.S., labor was the biggest factor in cost. Now materials are much bigger than labor," Mountford noted.

Mountford said the price of materials has gone up dramatically over the past 18 months. "Silver was trading $10-12 an ounce for 10 years. It jumped up to $45-$50 an ounce in six months," While the amount of silver C&K uses is relatively small, "when it goes up five-fold in two years, it suddenly is a bigger part of the overall cost."

Kiyoko Toyama, president of NKK Switches in Scottsdale, Ariz., said China may be one reason raw material prices have increased. As China has become more industrialized, it has had a greater need for copper and other raw materials, resulting in greater demand.

Buyers are not sympathetic when it comes to price increases for switches or other components. "Buyers are trained to beat up on suppliers on prices," said Toyama. "Even if they understand the need for higher prices, they can't accept that."

In some cases, buyers may look for alternative lower-cost parts. Switch manufacturers may redesign an existing part, streamline it, and offer it at a lower cost.

Although switch prices may increase later in the year, it is not likely to dampen switch demand. Switch manufacturers said demand has been strong since last year, although it cooled off a bit in the fourth quarter of last year before picking up again in the first quarter of 2011.

"We have not seen a large drop-off in business from 2010," said Tom Meyers, president of E-Switch, based in Minneapolis, Minn. He said business is not as stellar as last year, but there is growth.

Most component manufacturers and distributors "are predicting 7-10 percent market growth in 2011," said Mountford of C&K Components. "And we will do better than that. We have a 15 percent growth target in 2011. I'm not sure we will achieve it, but we will come close to it."

Despite strong switch demand, supply conditions for switches have improved compared to 2010 when some parts had long lead times or were in short supply.

Supply was tight last year because many switch manufacturers cut back production in 2009 during the downturn and distributors cut back on inventory.

As the market came back last year and distributors added inventory, many suppliers could not keep up with demand.

Lead times for most switches increased. "We had capacity issues with tactile switches. Lead times for DIP switches were up to 20 weeks. Eight to 10 weeks is a standard lead time," said Mountford.

For most parts, lead times have fallen back to off-the-shelf in 8-12 weeks. 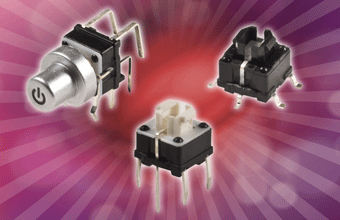 Switch suppliers say the March earthquake and tsunami in Japan had a limited effect on switch business so far this year.

The quake had a short-term impact on NKK Switches, which has manufacturing in Japan.

"About 50 percent of our products are manufactured in Japan and 50 percent in China," said Toyama, of NKK Switches. One of its plants is in Iwaki City near the Fukushima nuclear power facility which was damaged by the quake.

"The fortunate part was that there was no loss of life, and no one was injured, but the Iwaki City plant was closed for about three weeks," said Toyama. In May the plant was back to 100 percent capacity.

NKK transitioned some manufacturing at its other facilities in Japan and in China until the Iwaki City plant reopened.

Mountford said there was some panic buying after the quake and C&K got some additional business.

"I know of three or four pieces of business that we got, but it did not significantly move the needle," Mountford said. "Long-term, it may help us. Maybe a customer had a sole source Japanese supplier and decided not to have a sole source for a part."

While switch demand is strong across the board in 2010 in terms of products, there is especially robust growth for illuminated, sealed, and miniature switches. That strong demand is indicative of trend occurring in the industry, said Meyers of E-Switch.

Ron Celander, director of engineering for E-Switch, said switches have gone from 6 or 7 mm in size down to half, or even 30 percent, of that. Some are almost microscopic." E-Switch makes a tactile switch that measures 3 mm x 2.6 by .65 mm in height.

The third trend is sealed switches. OEMS are "looking for product that can be washed during production process," Meyers said. In some cases, they need sealed switches for dust or moisture protection.
Toyama said NKK is seeing strong demand for many switches by the broadcast equipment industry.

"About 20 percent of our business is broadcast equipment," Toyama noted. "We have developed illuminated switches which are used by the broadcast market."

The broadcast equipment market will continue to grow for NKK and other switch suppliers because of the transition to high definition television. While the transition has already occurred in North America for the most part, it is starting to transition other parts of the world.