Distributed-power architecture (DPA) schemes are common in today’s servers, workstations, telecom equipment and other applications where AC/DC front-ends convert the input from AC mains to a fixed DC-output voltage. Normally, this DC voltage is around 48 or 24 VDC. However, because electronic loads in microprocessors, FPGAs and ASICs are moving towards lower voltages with higher currents and faster transient response, the DC bus voltage in these DPA-based systems is being further dropped to 12, 9 or 5 VDC using an intermediate bus architecture (IBA). The IBA scheme is enabled by using standard, isolated DC/DC converters, also called bricks. The lower DC bus voltage enables designers to easily build high-efficiency, high-density non-isolated point-of-load (POL) buck regulators for driving electronic loads as the step-down ratio is smaller.

Several manufacturers are offering isolated DC/DC converters in standard brick formats to address IBA needs. To facilitate this shift to IBA using a variety of bricks, which range from half-brick to one-sixteenth brick, manufacturers such as CUI, GE Critical Power, Murata Power Solutions, Power-One, and Vicor, among others, offer a portfolio of brick products. Lately, however, eighth-brick converters have emerged with more power from the same standard 2.3 x 0.9 inch (58 x 23 mm) footprint with higher efficiency, digital control and at lower cost. As a result, vendors can deliver the power and functionality of quarter bricks in significantly smaller eighth-brick footprints with higher efficiency and density at a competitive price.

Vicor, for instance, has significantly improved the power capability of its eighth-brick IBC converters. Offering up to 500 W output with peak efficiency as high as 98 percent, Vicor’s eighth-brick IBCs can replace competitive quarter-bricks in many space-constrained systems. The supplier’s IB048E120T40N1-00 in an eighth-brick footprint (Figure 1) is one such bus converter that is rated for up to 500 W from 50 to 55 VDC input. The output is 12 VDC with 1,500 VDC isolation between input and output. Thanks to 1 MHz bandwidth operation, the IBC cuts transient response time by a factor of 10, eliminating the need for bulk capacitors across the intermediate bus to save additional space. 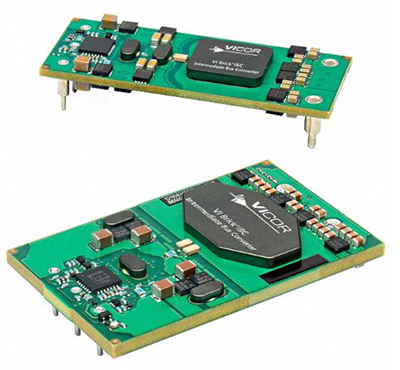 For medium-power applications that require bus converters below 300 W, Vicor has added several members to its VI Brick IBC series. For example, eighth-brick IB048E120T32N1-00 is tailored to deliver up to 300 W at 12 VDC output from 38 to 55 VDC input with peak efficiency of 97.8 percent. Its high efficiency enables full-load operation at 65°C with only 200 LFM airflow. Its small cross-section facilitates unimpeded airflow above and below its thin body to minimize the temperature rise of downstream components. Vicor’s 9.6 VDC output version is designated IB048E096T40N1-00.

Similarly, CUI has boosted the power capability of its fully-regulated eighth-brick intermediate bus DC/DC converter series NEB-N to 300 W. Housed in an industry-standard 5-pin package (Figure 2), the eighth-brick converters incorporate 32-bit ARM processors with power-optimizing firmware to maximize and flatten the efficiency curve, delivering peak power and high efficiency across a wide range of load conditions. With typical efficiency rated over 95 percent and optimized for 20 to 100 percent load variations, the modules are tailored for space-constrained applications where loading conditions can vary greatly, including next-generation information and communication technology (ICT) equipment. The digital PMBus interface is optional. It enables advanced power management features such as voltage margining, fault management, delay ramp-up and programmable output voltage. All of these features are accessible via CUI’s Novum ACE GUI. In addition, the unit offers an optional baseplate for improved thermal performance, and droop load sharing up to 592 W. 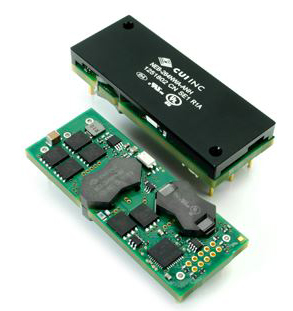 Another supplier pushing the power envelope of eighth-brick converters is GE Critical Power (formerly Lineage Power). It has added a new 300 W eighth-brick member to its high-power Barracuda family that offers digitally controlled, fully-regulated DOSA-compliant DC/DC bus converters with a PMBus interface. The EBVW025A0B provides an easy upgrade for 9.6 to 12 VDC intermediate bus applications where multiple low voltages are subsequently generated using non-isolated point-of-load (POL) regulators. GE’s EBVW025A0B operates from an input voltage range of 36 to 75 VDC and provides up to 25 A output current at output voltages from 6.0 to 13.20 VDC. The 300 W converter incorporates digital control, synchronous rectification technology and innovative packaging techniques to achieve over 95 percent efficiency at 12 VDC output (Figure 3). This leads to lower power dissipation, which translates into lesser heat and easier thermal management. Standard features include on/off control, output overcurrent and overvoltage protection, over-temperature protection, input-under and overvoltage lockout. Optional features include output voltage remote sense and trim from 6.0 to 13.2 VDC, passive droop paralleling, and a baseplate for heatsink or cold-wall applications. The output is fully isolated from the input, allowing versatile polarity configurations and grounding connections. Built-in filtering for both input and output minimizes the need for external filtering. 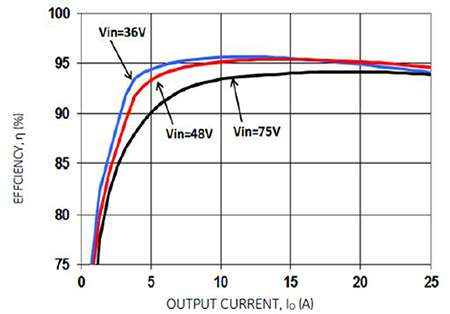 Similar efforts have enabled Murata Power Solutions to increase the output power capability of its eighth-brick RBE-12/20-D48 to 240 W with regulated DC output at 12 V from a nominal 48 VDC input. Likewise, Power-One is squeezing the same amount of power from its eighth-brick SQE48T20120 with efficiency as high as 94.5 percent and pin-out and input/output functionality similar to the industry-standard quarter-bricks.

The SQE48T20120 converter’s thermal performance is accomplished through the use of patented/patent-pending circuits, packaging and processing techniques to achieve ultra-high efficiency, excellent thermal management and a low-body profile. Its low-body profile and the preclusion of heatsinks minimize impedance to system airflow, thus enhancing cooling for both upstream and downstream devices. The use of 100 percent automation for assembly, coupled with advanced electronic circuits and thermal design results in a product said to have extremely-high reliability. Operating from a wide range of 36 to 75 VDC input, the SQE48T20120 converter provides a fully-regulated 12 V output voltage. Employing a standard power pin-out, the SQE48T20120 converter is an ideal drop-in replacement for existing high-current eighth-brick and quarter-brick designs. Inclusion of this converter in a new design can result in significant board space and cost savings. The designer can expect reliability improvement over other available converters because of the SQE48T20120’s optimized thermal efficiency. In summary, eighth-brick bus converters can now handle more power and are replacing quarter bricks in many space-constrained applications. So what will happen to quarter-brick converters? They, too, are concurrently moving up the ladder to handle the tasks formerly assigned to half- and full-bricks.

For more information about the converters discussed in this article, use the links provided to access product pages on the Hotenda website.