LEDs are an enlightened alternative to traditional lighting. Their benefits include long operating life, compact size, vibration resistance, low-voltage (LVDC) operation, minimal maintenance cost and minimal environmental impact. LEDs are immune to the mercury-disposal problems that plague fluorescent tubes. However, manufacturers have struggled to increase the energy efficiency of the devices to the level achieved by established lighting technologies.

In this feature, we will compare LEDs to legacy light sources, explain the relevance and importance of Haitz’s Law, and highlight new product introductions that push the envelope of LED design and capabilities.

Exceeding the efficiency of the grandfather of electric light sources – the incandescent bulb – was relatively easy, even in the early days of high-brightness LEDs. Incandescent bulbs are rapidly going the way of VCRs and cassette tapes because they require so much power. Only about 5 percent of the energy they consume is turned into light. This results in an efficiency of about 10 lumens per watt (10 lm/W).

To gain mass appeal LEDs have had to evolve to match the lighting efficiencies of CFLs and fluorescent tubing.

Manufacturers of high-brightness LEDs, such as Cree, Vishay, and OSRAM, have invested millions of dollars into improving the chips’ performance by addressing three key areas of technology: internal quantum efficiency, extraction efficiency and white-light conversion efficiency. 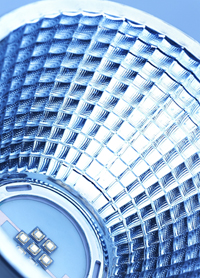 
Figure 1: OSRAM’s luminaire features seven OSLON SSL high-brightness LEDs providing a combined light output of 1,000 lm. Internal quantum efficiency is a measure of the conversion efficiency of the diode’s electrons and holes into photons. This measure of a high-brightness LED’s performance has increased over time through better understanding of device physics and development of device structures that enhance "radiative recombination," such as multiple quantum wells.

Extraction efficiency is a measure of the efficiency with which internally generated photons are "extracted" from the device. For compound semiconductor devices, the high index of refraction of the devices’ materials limits efficiency because of the large degree of total internal reflection of light emitted from the active region.

Finally, white-light conversion efficiency is a measure of how well the phosphor that coats the inside of the high-brightness LED’s lens converts the blue light generated by the device into useful white light output.

Commercial devices have somewhat more modest outputs to maintain competitive pricing. Nonetheless, at around 60 to 100 lm/W, these compare favorably with the CFLs they are designed to replace.

It is important to note that because of the technology they’re based on, high-brightness LEDs can typically withstand only modest currents at low voltages, using a constant current supply, so maximum power dissipation is only a few watts. Consequently, a single white high-brightness LED can typically produce between 80 and 160 lm at current of between 350 and 700 mA. To increase the output for ambient lighting, manufacturers gang chips into a single luminaire.

Manufacturers continue to invest in new product development that advances the industry. OSRAM, for example, recently introduced its OSLON SSL. The LED is based on a 1mm² chip, providing a typical brightness of 92 lm at an operating current of 350 mA and 156 lm at 700 mA. The device has an efficiency of around 90lm/W. It is available in all white tones (2,700 K to 6500 K) and in different colors. The separate LEDs can be closely clustered in the luminaire to eliminate unwanted shadowing. The unit shown in Fig. 1 uses seven high-brightness LEDs for a total output of around 1,000 lm. This compares favorably with 1,000 lm from a 100-W incandescent bulb, 1080lm from an 18-W CFL or 1,000 lm from a 50W halogen light. As a guide, 300 to 1,000 lm/m2 are needed for common visual tasks in a commercial or residential environment.

For its part, Cree offers the XLamp MP-L EasyWhite LED. The company says the device offers the performance, color consistency and lumen density to rival conventional light sources. It is available in a 12 x 13-mm package. Each LED can produce between 100 and 175 lm at an efficiency of 89 lm/W. The company says it’s possible to combine the LEDs into a luminaire to produce up to 1,500 lm at 250 mA.

Among its wide range of LEDs, Seoul Semiconductor offers the Acriche (see Fig. 2), which the company says is optimized for lighting applications. It claims that the Acriche A4 Series Cool White products, for example, have a luminous efficacy of 100 lm/W. Acriche doesn’t require a separate driver because it uses a high-voltage AC current source, reducing system cost. 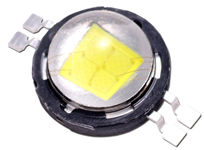 
Modern HB LEDs have reached the point where they outperform conventional light sources on the brightness/efficiency continuum. The challenge remaining to achieve mainstream adoption is price, or more specifically, price per lumen. Despite dramatic falls, high-brightness LEDs still cost much more per lumen than conventional light sources. However, according to Haitz, prices will continue to plummet by an order of magnitude per decade – so it’s only a matter of time before CFLs are displaced by LEDs, as CFLs replaced incandescent bulbs.

In the meantime, expect the market for LEDs to continue to grow rapidly. According to analysts from Digitimes Research, high-brightness LEDs are set to take a 10 percent share of the mainstream lighting market in 2011. The Taiwan-based company predicts that the market for the devices will grow to $12.6 billion in 2011, up 53 percent from $8.25 billion in 2010. That represents more than a two and one half times increase from 4.8 billion units in 2010 to 12.4 billion this year.