Harvesting the Energy of Motion in Automotive Designs

A look at the technology of kinetic energy recovery systems (KERS) to harvest energy from the motion of a vehicle including the different types of technologies.

This article looks at the increasingly popular technology of kinetic energy recovery systems (KERS) to harvest energy from the motion of a vehicle. It looks at the different types of technologies, from flywheels to double layer capacitors and supercapacitors, with the advantages for fuel efficiency, as well as the essential supporting high reliability, automotive-grade power management electronics to capture, store and control the energy produced.

Recovering energy from automotive systems is an increasingly important part of the development of the next generation of vehicles. This harvesting of kinetic energy is being achieved in several different ways, and coupled with different types of storage and power management technologies.

The idea of KERS, the Kinetic Energy Recovery System, started in Formula One and is now emerging in more commercial vehicles as a way of reducing fuel consumption. In Formula One the energy stored under braking is made available to the pilot, who can decide to reuse it in specific situations such as a boost when overtaking on a straight stretch, via a button.

An electrical system developed by Magneti Marelli in Italy connects directly to the drive shaft through a motor so that, when braking, the same shaft acts as a generator to convert the motion into electrical energy.  Through the control unit, the current recharges lithium ion batteries. Under acceleration, on the other hand, kinetic energy is taken from the batteries when the pilot operates the power boost and, again through the electronic control unit, it is sent to the motor-generator. This then rotates in the opposite direction and applies an accelerating force on the drive shaft to give the boost. This system can reach up to 40,000 revolutions per minute.

The main technological challenge was to fit a high-power system into a small space and low weight and cope with extreme environment in terms of temperatures and vibrations. Magneti Marelli is now working on a new version called ERS that combines the recovery of kinetic energy during braking with the recovery of energy recovered from the hot exhaust gases, connecting both to the electric motor-generators connected to the drive shaft.

For a more commercial system, Volvo has developed a version using a lightweight flywheel to capture the energy. UK tests of the Flybrid technology showed a boost in a car’s performance by 80 hp while reducing the fuel consumption by a quarter. The company worked with one of the leading KERS technology suppliers, Flybrid Automotive, which is part of the Torotrak Group. Flybrid and Torotrak were developing similar technology, and Torotrak bought its competitor in 2014. 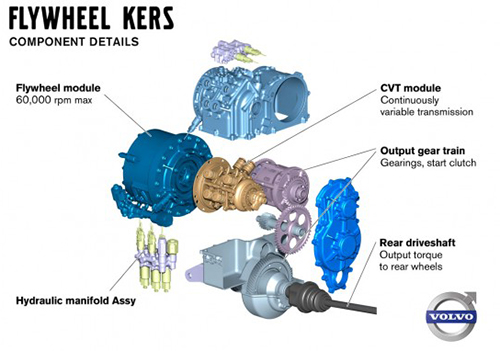 The system is the first full-scale trial of a rear-axle mounted flywheel system in a front-wheel-drive passenger car and is the result of a partnership between Flybrid, Volvo and the Swedish government. When the car brakes, the kinetic energy is used to spin up a 6 kg carbon fiber flywheel at speeds up to 60,000 revs per minute. When the car starts moving off again, energy stored in the spinning flywheel is transferred back to the rear wheels via a specially designed transmission, and can either boost power or reduce load on the engine. The conventional engine that drives the front wheels is switched off as soon as braking begins so that the energy in the flywheel can then be used to accelerate the vehicle when it is time to move off again. As the flywheel is activated by braking, the storage of energy is short lived, making it ideal for saving fuel in busy urban traffic.

The experimental Flybrid flywheel is 20 cm in diameter and made with the combination of a steel hub and carbon fiber outer. The carbon fiber wheel spins in a vacuum to minimize frictional losses. 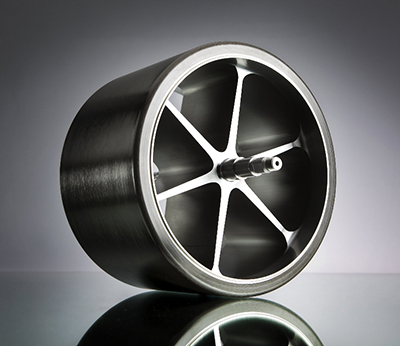 In a similar way, UK engineering company GKN has been working with Audi on a new generation of its Gyrodrive flywheel hybrid energy storage system. GKN increased the energy storage capacity to 4 MJoules and average power rating while retaining the same dimensions and mass. This system sits alongside the driver and provides up to 4 MJ of energy per lap, storing up to 750 Kjoules at any time. On acceleration, Gyrodrive feeds the energy back to the front axle where it produces more than 200 kW of power.

A commercial version of the technology is also being used in buses in the UK, producing fuel savings of up to 25%, and GKN is scaling up production as part of plans to offer the technology worldwide as a viable alternative to battery hybrids.

Other techniques use a high-density capacitor system such as a supercapacitor or ultracapacitor.

Matlab engineers in India have developed a model that shows how KERS can be used when the energy from braking is stored in a lithium-ion battery and ultracapacitor. This model uses Matlab’s SimElectronics and Simscape tools to support system-level design where the KERS performance is a complex trade-off between the mass of the three main components – the battery, ultracapacitor and motor-generator, plus the energy-management strategy. 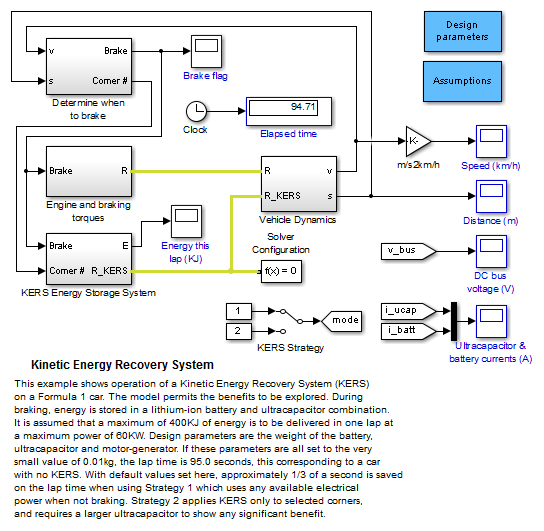 The challenge is that the KERS system adds mass which reduces acceleration due to the engine, and the stored electrical energy from braking must more than compensate for this. Lithium-ion batteries have a very high energy per unit mass but a poor power per unit mass, while an ultracapacitor has relatively low energy per unit mass, but a very high power per unit mass which suits this particular application. Supercapacitors with extended temperature range, for example from -40°C to +85°C such as the 1F FT0H105ZF from Kemet or the 5F BCAP0005 from Maxwell Technologies, use a structure of multiple layers to provide a higher capacity to deliver the power from the KERS system quickly, building on the established technology of electric double layer capacitors (EDLC).

The MAX16920 power-management IC from Maxim Integrated integrates three high-voltage step-down DC-DC converters, one high-voltage linear regulator and an overvoltage protection block to reduce the size and complexity of the power control system. It operates over the -40°C to +125°C temperature range, and is available in a compact, thermally-enhanced 32-pin TQFN package that measures 7 mm x 7 mm. 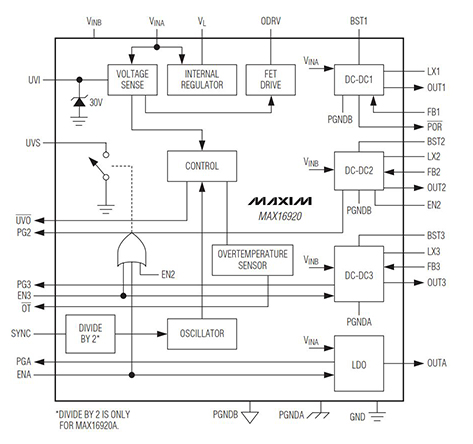 Figure 4: The MAX16920 from Maxim provides DC-DC converters for a KERS system.

The three step-down converters provide 150 mA, 600 mA, and 1.5 A, while the linear regulator is capable of up to 150 mA. The device is designed to operate with input voltages between 5.5 V to 28 V and survive voltage transients to 45 V, making it ideal for automotive applications. It is also optimized for high efficiency and low standby current to make sure that as much of the energy stored in the battery and ultracapacitor are used to power the vehicle. 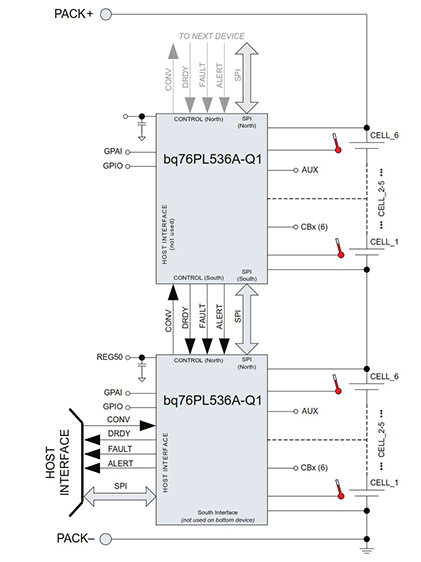 Figure 5: The bq76PL5536A from Texas Instruments can be stacked together to manage up to 192 lithium cells in a KERS system.

To help KERS designers combine the different technologies they need, the bq76PL536ATPAPTQ1 also integrates a voltage translation and precision analog-to-digital converter system to measure battery cell voltages with high accuracy and speed. The system will also scale with the power requirements of the KERS, as the device can be stacked vertically to monitor up to 192 cells without additional isolation components between the controllers. A high-speed serial peripheral interface (SPI) bus operates between each device to provide reliable communications throughout the battery cell stack.

The components to support a new generation of KERS energy-harvesting technology in electric, hybrid and conventional vehicles are rapidly becoming available. The combination of lithium ion power packs, supercapacitors and power management devices is enabling more energy to be recovered in different ways. Feeding this back into the vehicle is reducing the fuel consumption, extending the range and battery life, and providing benefits to both the manufacturers and the user. The power management sub-systems need to map to the energy harvesting technologies, but these are now emerging to provide system developers with the options they need.